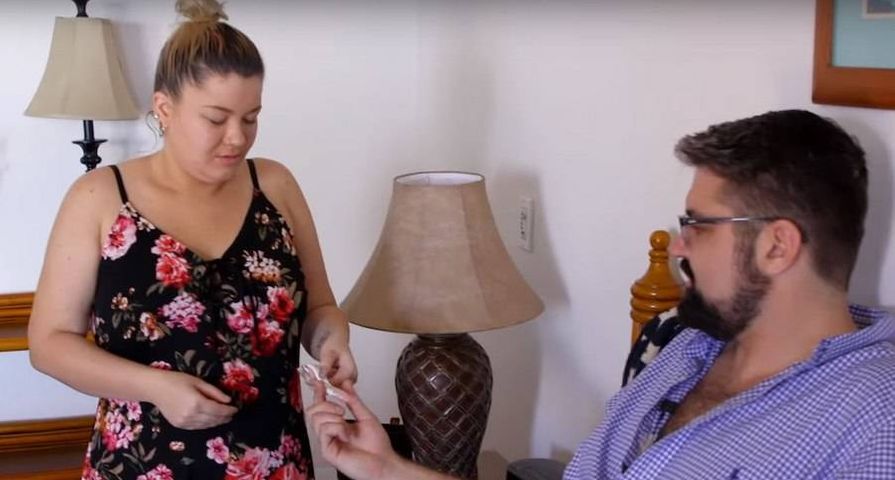 Teen Mom OG has seen all of the women on a wild ride of highs and lows over the course of the last nine years, and the Monday, January 15 threw a whole new twist in the life of Amber Portwood as she suspected she was pregnant shortly after beginning to date her new boyfriend Andrew Glennon. Follow a long for a full recap of the episode “Oh Baby.”

The episode saw Amber and Andrew decide they needed to get away and took a vacation to Hawaii, but things didn’t start well when Amber didn’t feel well before they even left California and she became so sick she had to miss her plane and catch one the next day. It didn’t take long for Amber to reveal that she suspected she was pregnant because her sickness reminded her of how she felt when she was pregnant with Leah. Sure enough, the relaxing vacation turned a lot more stressful after Amber took a pregnancy test which came back positive!

Meanwhile, Amber’s ex Gary and his wife Kristina were doing some checking up on Amber’s new boyfriend and came across some concerning things including his own battle with depression. Gary explained to Kristina that he was just concerned about his daughter with Amber, Leah. The two then discussed that they had been honest with Leah, telling her that her mother hadn’t been around because of her depression, but after Leah met Andrew she apparently said to Kristina, “If she was too depressed to see me, she wasn’t too depressed to find a new man?” Then Kristina half-joked that she should formally adopt Leah.

Babies were a theme of the episode as Catelynn Baltierra made the decision to take her IUD out, but keep it a secret from her husband Tyler because he wanted to be surprised when they got pregnant again. Catelynn explained to her mom that she wanted to be done having children by 30 and since she was 26, it was time to get the ball rolling again. At the doctor’s, Catelynn was told that she should lose around 15 to 20 pounds and quit smoking in order to be healthy for the pregnancy, and Catelynn revealed Tyler had already quit smoking!

Farrah Abraham was also going on vacation! In an earlier episode she had explained to her dad that she wanted to go to Italy with her daughter Sophia but also wanted to invite her mom Debra in an effort to repair their relationship. She also invited her dad Michael and his girlfriend Amy so that they could became engaged on the trip, but failed to tell her mom that her ex-husband and his girlfriend would also be on the trip. Things became increasingly awkward as Debra ran into Michael and Amy, and things only got worse as Sophia accidentally called Debra “grandpa.” Of course, it wouldn’t be a Teen Mom episode without an altercation between Farrah and her mother, and at dinner when Debra brought up Farrah’s ex Simon, Farrah snapped and called Debra “an evil bitch.”

In a truly shocking move, after all the drama early in the season, Maci Bookout actually received an invite to her ex Ryan’s wedding to Mackenzie Standifer. In the episode Ryan and Mackenzie headed to Vegas for their bachelor and bachelorette parties, and while with her friends Mackenzie revealed she wanted to have more kids by the following year (she has a son Hudson, while Ryan has Bentley) and even cried when talking about her shotgun first wedding to Ryan before he headed off to rehab. Ryan wasn’t on the same page because at the same time Mackenzie was talking about more kids, Ryan was telling his dad he wasn’t ready for another kid but did want a dog.

Mackenzie then confirmed she did invite Maci and Taylor to the wedding, but Maci revealed that when she got the invite it was addressed to Maci Bookout and her son Bentley, with no mention of Maci’s husband Taylor or her married named Maci McKinney, but Maci said she was bringing him anyway.