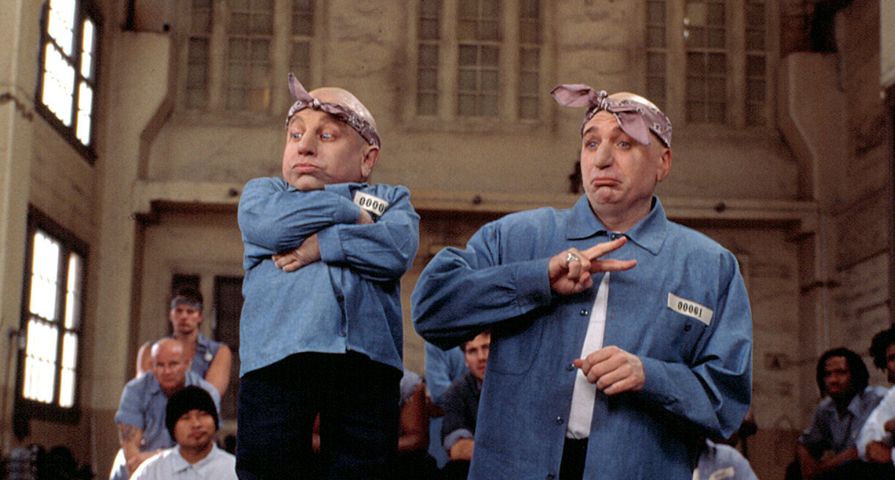 Myers appeared on the show on Wednesday, May 2, where Kimmel asked him about the service he attended for Troyer following his death. “Verne was a fantastic human being,” Myers began as he became emotional.

“I worked with him for a long time. A great comedian, I always just want to make that point, that as written, Mini-Me is like almost a prop, but he brought it up off the page better than written and we ended up just giving him more and more stuff to do,” a teary-eyed Myers said. “He was a great physical comedian, a great dancer, just a fantastic guy and at the memorial, he died at 49…he wasn’t supposed to live past his teens, and at the memorial you saw 150-years-worth of life,” the actor explained of the photo montage shown at Troyer’s memorial service.

The Austin Powers star then told Kimmel a story about how he was invited to the White House for a state dinner for Canadian Prime Minister Justin Trudeau, and being Canadian Myers was also invited. Myers then explained how when he met both Barack Obama and Justin Trudeau both men asked him about Mini-Me and Myers just thought, “Verne brought so much love to people, you know what I mean?”

Myers added that working with Troyer was amazing and he misses him. “Every day you see him, you go ‘Wow! That is a small human.’ But by the end of the day, you just saw Verne. It just sort of went away….He was part of the cast and fantastic,” Myers said. “I miss him.”

Following the news of Troyer’s passing, a statement from Myers was released: “Verne was the consummate professional and a beacon of positivity for those of us who had the honor of working with him. It is a sad day, but I hope he’s in a better place. He will be greatly missed.”