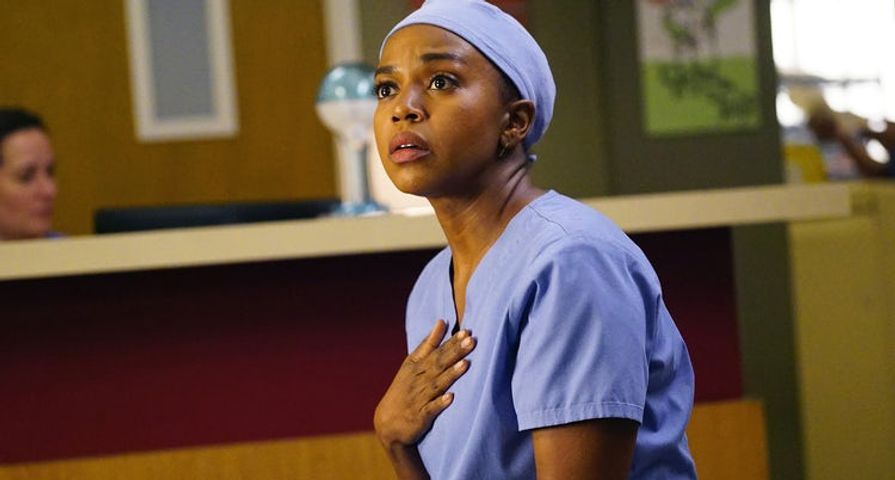 Forewarning, this has been one of the most intense episodes we have seen this season.

At the beginning of the episode we witnessed happy lovers waking up together enjoying the bliss of romance. We are misled to believe this episode is going to be based on relationship development and how to enjoy love when you have it. However, we soon find out the theme of tonight is actually “never assume you have it all figured out”.

Owen opened his front door to find two military officers waiting to announce  that they have found his sister. It is unclear the state his sister is in, however Owen seems absolutely distraught and without needing to use words, it’s safe to assume she has been found dead. Owen headed into work in a complete daze but quickly snaps into action when confronted with a baby blue from choking on swallowed coins. With forceful pounds on the baby’s back Owen saves it’s life while remaining in his autopilot mindset. Owen warned the family to make sure the baby is checked for brain damage due to possible oxygen deprivation and abruptly left. When the family tried to thank Owen for saving their baby’s life, he lashed out at them swiftly walked away. Amelia followed the clearly distraught Owen, sensing something was wrong and it is revealed that his sister, much to Owen’s disbelief, has been found alive. Later, at Amelia/Meredith/Maggie’s house, Owen confesses that the reason he has been feeling so terribly at the encouraging news of his sister’s return is because of the immense guilt he feels for giving up on ever seeing her alive again. While she was being tortured, he had stopped hoping or fighting to bring her home alive.

While this was all going on, Stephanie Edwards has Webber sign her papers to allow her to return to work. Edwards did end up going to counselling sessions, although Minnick still seemed reluctant to allow her to resume full duties.  Karev this episode was off in Miami stalking Jo’s husband, Paul Stadler at a medical conference in which Stadler was a key speaker. The main case most doctors were on top of was of a couple who seemingly went on a drive for some “private time”, forgot to put on their parking break and ended up in a severe car accident.

Due to Minnick’s lack of confidence in Edwards’ stability, she makes Edwards watch over Kieth, the man in the accident who had much less severe injuries than the woman named Alison. When Keith and Alison wake up from their unconscious states, they both inquire as to where the other one is. Before Alison could get answers, or explain what happened, her symptoms worsen to the point of coughing up blood. As the doctors treat both patients they speculate as two whether the pair in the car accident were lovers, married, or just hook up buddies. Stephanie walks into the fully alert Kieth’s room to find him trying to reach Alison, she is quickly convinced to bring him to her. However in Alison’s room, as she wakes up, it becomes clear that the situation was not what anyone had previously assumed. Kieth had gotten into Alison’s car, held her at knife point, forced her to drive to the woods and tried to sexually assault her. Alison, thinking there was no other way to stop him, put the foot on the gas pedal and crashed the car hoping it would kill Kieth.

Now that the hospital had been made aware that a potential rapist is on the loose, they activate full lock down. However, no one seems to be able to find either Kieth or Stephanie. Kieth has been forcing Stephanie to help him escape by holding a sharp blade to her neck, at one point he even slightly cut her. But, when the hospital went on full lock down, Kieth, Stephanie and a little girl (who has been wondering the halls with out parental supervision) were all locked in an abandon hallway together. Stephanie, mistakenly reveals to Kieth the only way to remove the lock down would have to be due to an emergency evacuation, such as a fire, and Kieth frantically begins to search for flammable materials. Using ethanol, cloth, and a flint Kieth tried to trigger the sprinkler system while Stephanie and the little girl hid in a corner in hopes of escaping his manic rage. Stephanie, seeing an opportunity to take out a distracted Kieth, goes to set him on fire. Ok, we have to address the fact the blade she was terrified was right next to her, but sure lets light a guy on fire.  Due to Stephanie’s impromptu thinking, the now ablaze Kieth wandered far to closely to oxygen tanks that she was unaware of and the last thing we see in the episode is a shot of Meredith watching the wing they were in explode.