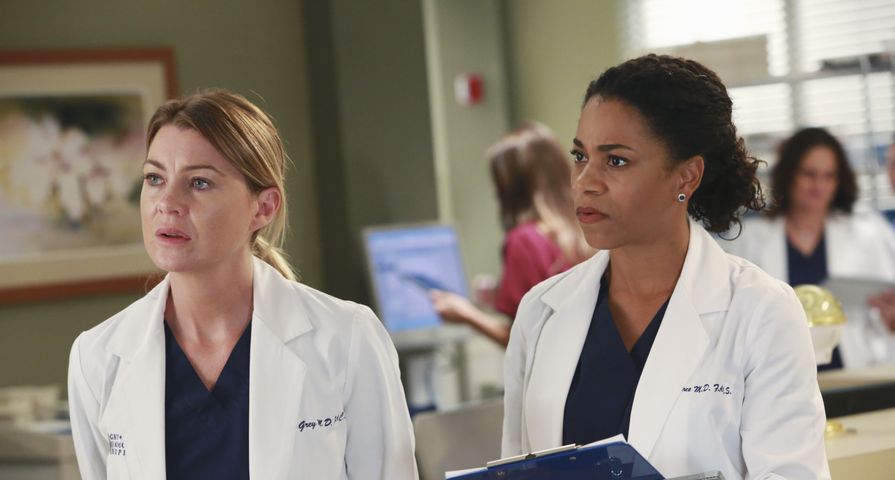 Tonight was all about risks and what you put at stake to do what you truly believe is right.

Some events took place, that although minor  other plots of the night, are important nonetheless. Andrew attempted to tell Jo about his true feelings, however he was immediately shut down. Arizona cancelled a date with Minnick, although sweet and steamy words of affirmation followed the cancellation in an elevator. It’s no surprise that the two hooked up by the end of the episode as they clearly deserve to be together. I mean how can you deny that natural chemistry? On the other side of Grey Sloan, Minnick, Bailey, and Webber reviewed staff performance. Warren’s habit of playing it safe as a senior resident was met with dismay. This led to Webber confronting Warren in front of the OR board which sparked a new fire in Warren to prove his worth as a surgeon.

Maggie and Meredith seemed to have completely recovered from last weeks disagreement. However, Maggie still seemed uncomfortable when Meredith asked if it would be ok if Riggs stayed the night. Once Maggie discussed with Amelia how serious the relationship must be if Meredith was willing to remove Derek’s tumor from her room, she realized that supporting the couple may be what’s best for Mer.

A patient named Holly, who fell down two flights of stairs and suffered many internal and external injuries, is assigned to April and Meredith. Although they were able to maintain the injuries caused by the fall, they are alerted by a large and inoperable heart tumor. Holly was already well aware of the tumor, as well as their year long life expectancy and has chose to live life as they want regardless. Maggie tries to convince Holly that they are the doctor that will be able to remove the tumor despite the many others that have tried. It isn’t until our girl Mer steps in and lays a ball of truth on the table that Holly finally consents to the operation. The situation escalates while in surgery as it becomes apparent the tumor has spread into the esophagus and possibly the spine which made the operation too dangerous to continue. Holly didn’t seem to be alarmed by the news that Maggie failed. The doctors learn that many of Holly’s encouraging words were only there to heal their own ego. This self reflection stunned them as they previously believed they could do the impossible.

The meat of the episode was the story  of a young boy who brought himself into the emergency room because he was “feeling bad”. Using a fake name and back story based off the book “Charlotte’s Webb” the doctors instantly knew that something was wrong with the case.  It was soon found out that the boy had a large brain tumor that was causing seizures and visual impairment.  Alex is put on the boy’s case and his parents are quickly located. After the parents are informed that the tumor is fatal if not operated on immediately, they refuse to allow the surgery as it is against their religious beliefs. Edwards and Karev try to persuade the parents against releasing the boy early however legally they are unable to do anything.

When the boy checks himself in for a second time, this time nearly blind, Karev and Edwards fake data stating that the child had suffered seizures in order to declare him as “emergent” and operate without the parent’s knowledge. The surgery goes well and it is revealed that the boy hadn’t been checking himself in, the mother has been secretly taking him behind the father’s back. It becomes apparent it is the father’s beliefs that were preventing the boy’s surgery and that the mother just wanted her boy to be safe. When Edwards is confronted by the father later screaming about how he’ll sue, Edwards loses her temper and throws a clipboard near (but not at) his head. This causes Bailey to revoke Edwards’ privileges and is told they must start going to counselling.

By the ed of the episode we realized that risk is all about taking control and doing what you need to do because its right. Holy wanted to live her own life and not let her tumor control her. She risked never having surgery if it meant  impairing her life more so than the tumor itself. The boy and his mother risked an overly aggressive father for the chance of keeping a life. And Meredith risked letting someone new into her heart by starting to truly let go of Derek.

There are only two episodes left this season, so stay tuned and make sure you don’t miss what’s going on at Grey Sloan Memorial Hospital.