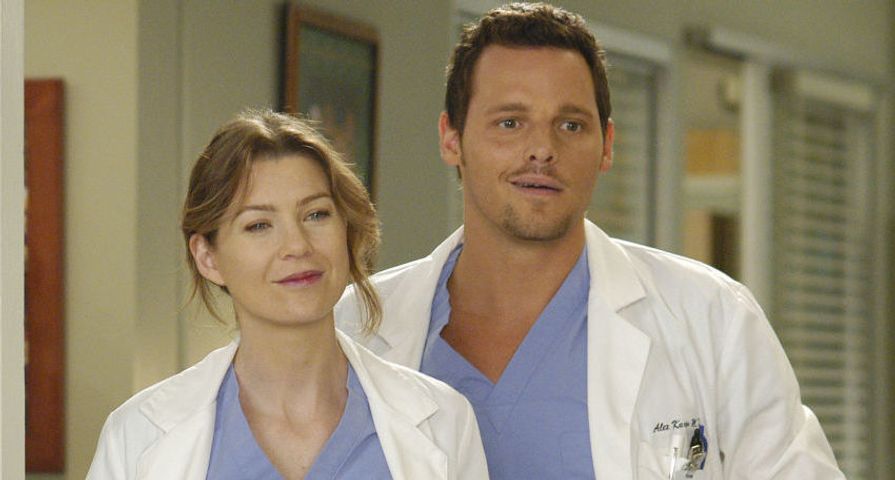 If Grey’s Anatomy has told us anything, it’s that love can come when you least expect it. Love can be tumultuous, frustrating, but it can also be what holds us together when things get tough. Tonight’s episode focused on the types of love that can’t be explained or are just generally unexpected.

A press conference dedicated to Nathan Riggs and Meredith’s incredible medical practices on the near plane crash from the last episode was held at Grey Sloan. Riggs described Meredith’s heroism stating that “She is your story, not me.” During these kind words, Riggs’ hand rested slightly to long on Mer’s shoulder in a clearly affectionate manner, and that’s all Maggie needed to piece together their relationship. Maggie immaturely placed her fury on Meredith, even  inappropriately questioning Mer in the food court asking “Did you join the mile high club?” Throughout the episode Meredith begs Maggie to just let her explain the nature of her and Riggs’ relationship and that it wasn’t just a stray hookup. However Maggie made it very clear that it doesn’t matter when things happened but that Meredith lied about it. You can almost understand where Maggie’s anger was coming from when she said “I trusted you to be honest with me when even my mother wouldn’t.” However, regardless of why Maggie was so upset, by the end of the episode we saw the relationship begin to repair with a classic girls night out.

Keeping on theme with unexpected love, a young couple’s amore is put to the test when the woman is diagnosed with a plethora of intestinal worms. Dennis, her boyfriend, leaves clearly disgusted and  the doctors all wonder if he will ever come back. Richard fiercely defends Dennis’ decision to leave believing he made the right choice.  Richard and Catherine’s relationship has been on the rocks for a while. However witnessing Dennis overcome what the doctors claimed to be the ultimate “deal breaker” was the inspiration Richard needed to accept Catherine’s eventual apology. It was Dr. Bailey who truly pushed Catherine to admit her wrongs and ask for Richard’s forgiveness and it was great to see the two couples overcoming their challenges, whether it be worms or marriage.

One of Alex’s previous patients came into the hospital in a heart wrenching portion of tonight’s episode. The 34 week pregnant woman soon found that her cancer had severely spread. An impromptu c-section was done in hopes of protecting both the baby and mother’s lives that otherwise would have be at risk with a prolonged birth. It becomes apparent that the mother’s life expectancy has been shortened to 2-3 months and the woman admits she has begun to grow tired of always fighting. Knowing the risks that come with giving birth the mother signs a Do Not Resuscitate, stating that she’s slowly dying anyways and  her body is tired. The baby is successfully born and for a brief moment we have the vision of a happy family. Things quickly turn for the worst when a blood clot travels to her lungs. Amelia holds the woman’s head in her arms, comforting her as she dies.

Owen finds Amelia on the verge of tears in an elevator and quickly holds and comforts her. With this act of love we have hopefully seen the beginning of another couple coming back together. Overall the episode showed us how sometimes love can’t be explained, that it is what it is, and you never know when you’ll need it most.