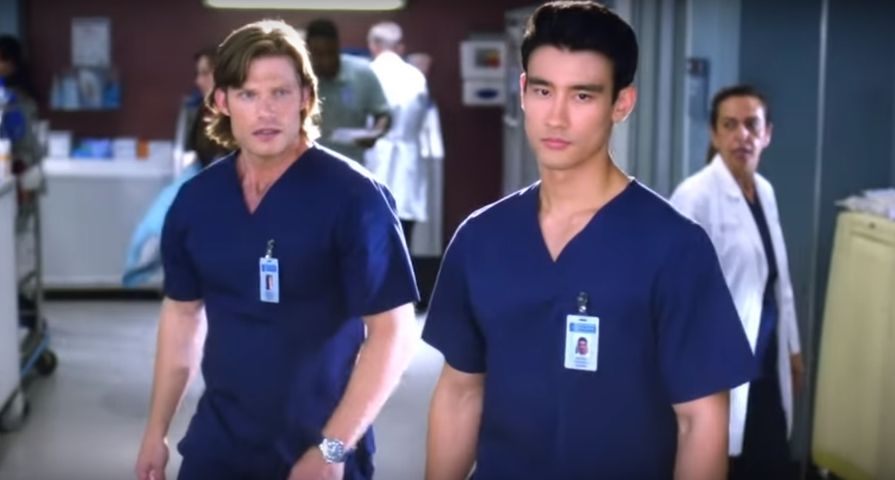 Grey’s Anatomy is ready for season 15, but it isn’t clear if fans are after the show’s first teaser trailer for the upcoming season was released!

The trailer starts off by revealing something shocking happening in the operation room, and is followed by the first look at Grey Sloan Memorial’s two handsome new doctors played by Chris Carmack and Alex Landi.

As previously reported Carmack’s character has been described as an “ortho god” and as a female patient sees the two approaching her jaw drops as she says, “Oh…my…god,” and Carmack declares, “Did someone ask for an ortho god?” Meanwhile Alex Landi has been cast as the show’s first ever openly gay male surgeon, Dr. Nico Kim.

In only 35 seconds even more is revealed as Kim Raver’s Teddy Altman declares she is 11 weeks pregnant, and the most shocking moment of all is when Meredith is seen in be with none other than Andrew DeLuca!

“One jaw dropping twist,” the voiceover announcer says before footage of the two TV docs in bed is seen, but whether the hookup is just a dream, fantasy, or real remains to be seen.

Season 15’s two hour premiere will feature the episodes “With a Wonder and a Wild Desire” and “Broken Together” and ” will see the doctors vie for a new position and Mer is struggling to stay focused. Meanwhile, Maggie is the keeper of Teddy’s secret as Amelia and Owen figure out their relationship. Jo and Alex’s honeymoon? Yeah, it doesn’t go as planned. The second hour features Meredith bonding with a patient while Jo forms an unexpected alliance.”