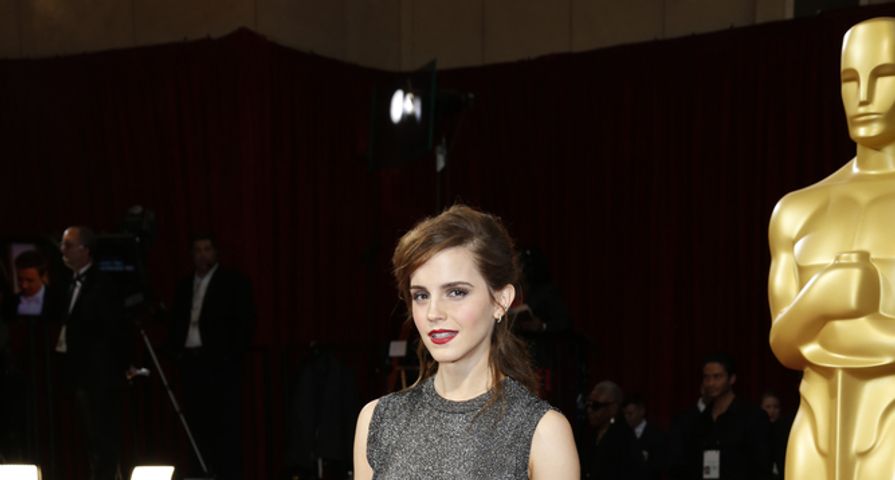 Emma Watson is one of the most stylish young stars in Hollywood. She goes from young and hip to sophisticated and elegant all in the blink of an eye. It doesn’t matter what she wears on the red carpet – she always looks great. Back when she was first starting out, she certainly wasn’t as fashionable as she is now. She made a number of mistakes, but she quickly learned from them. There are very few young celebrities out there who are even close to being as stylish as our favorite “Harry Potter” actress. Since Watson has become such a style icon, let’s take a look at her amazing fashion evolution!

Premiere of Harry Potter and the Chamber of Secrets – 2002

This little pantsuit that Emma Watson wore to the premiere of “Harry Potter & the Chamber of Secrets” is so unfashionable but, at the same time, ridiculously cute. She really didn’t know much about fashion at this point and why would she? She was only twelve-years-old! Despite her age, Watson was well on her way to becoming a huge star. The “Harry Potter” series turned her into a household name. Critics loved her as Hermione.

Premiere of Harry Potter and the Prisoner of Azkaban – 2005

The up and coming actress tried a very different look at the premiere of “Harry Potter and the Prison of Azakan.” She wore this white and pink floral dress with a matching headband and glittering flats – clearly a step in the right direction! While critics panned Daniel Radcliffe’s performance in the film, they were deeply impressed with Emma Watson. She earned two Otto Awards and the Child Performance of the Year award from Total Film.

Premiere Harry Potter and the Order of the Phoenix – 2007

Emma Watson’s sense fashion looked much more mature at the premiere of “Harry Potter and the Order of the Phoenix.” She looked lovely in this white bejeweled Chanel dress and a pair of metallic flats – a clear sign that her sense of style was evolving. Watson was already becoming a darling in the fashion industry. She was set to sign a two-year contract with Chanel to replace Keira Knightley as the face of Coco Mademoiselle.

Premiere of The Tale of Despereaux – 2008

The “Harry Potter” star looked sophisticated in this navy blue William Tempest corset mini dress that she wore to the premiere of “The Tale of Despereaux.” Emma Watson is growing up right before our very eyes! She has come such a long way from the decorated pantsuits she used to wear. She is making all the right decisions when it comes to fashion. She keeps it classy, but shows enough skin so we know that she has a killer figure. Good job!

Emma Watson wore this white, one-shouldered Burberry dress with a central slit to the MET Gala in 2010. The dress was custom-made and looked amazing on our favorite young actress. We really can’t get enough of her fashion. With each event, she continues to show us just how fashionable she can be. Watson can wear dresses that would make other celebrities look really sexy but, on her, they look sophisticated and elegant.

The “Perks of Being a Wallflower” star attended the premiere of “Harry Potter and the Deathly Hallows Part 2” in this Oscar de la Renta tulle gown with an embroidered bodice and full skirt. We love this dress on her – she looked all kinds of awesome. While the gown is a bit dressier than the other outfits she has sported on the red carpet, we think it deserves a special place in everyone’s heart. It kind of reminds us of something Carrie Bradshaw would wear on “Sex and the City.”

Emma Watson looked every bit the little style icon at the 2012 MTV Movie Awards in this edgy surf-inspired Brood Fall 2012 dress with Tabitha Simmons heels. The prints on this dress are fantastic – so fresh and so young. For this look, Watson landed on every best dressed list. We feel bad for all of the other young celebrities. In terms of style, how can many of them even compete with the likes of Emma Watson?

Premiere of The Perks of Being a Wallflower – 2012

The “My Week with Marilyn” actress was impossible to miss at the premiere of “The Perks of Being a Wallflower.” She looked ravishing in this nude Giorgio Armani gown, which featured long layers and scattered beading. As lovely as she looked, Emma Watson ended up experiencing a slight wardrobe malfunction. Her dress shifted a little too much, exposing a flesh-colored pastie and a bit of her nipple. Sigh – it happens! We still love the dress.

Emma Watson rocked another fantastic dress at the People’s Choice Awards. She wore this printed mini dress by Peter Pilotto, which featured edgy cutouts, with crystal encrusted strappy “Bailey” sandals by Tabitha Simmons. While this dress is reminiscent of a couple of other dresses that she has worn to other red carpet events, we don’t really care. This dress is fun and funky and it looks fantastic on Watson’s petite frame.

The “Noah” star looked stunning at the premiere of “The Bling Ring” in this Chanel Fall 2013 tweed dress with a high collar and tiered skirt. She accessorized with Giuseppe Zanotti heels, a black Swarovski-crystal Kiosque clutch and Graziela white wave ear cuffs, which totally completed her youthful yet sophisticated look. We can’t say this enough – we love Emma Watson’s red carpet fashion. She never disappoints!

At the 86th Academy Awards, Emma Watson proved yet again that she has impeccable fashion sense. She looked exquisite in this sleeveless, metallic and black Vera Wang gown with Jimmy Choo heels and a silver clutch. She wasn’t nominated for any awards that night; however, she did land on any and all of the best dressed lists, which is a skill in and of itself. We can’t wait to see more of her on the red carpet – she is just so incredibly stylish!