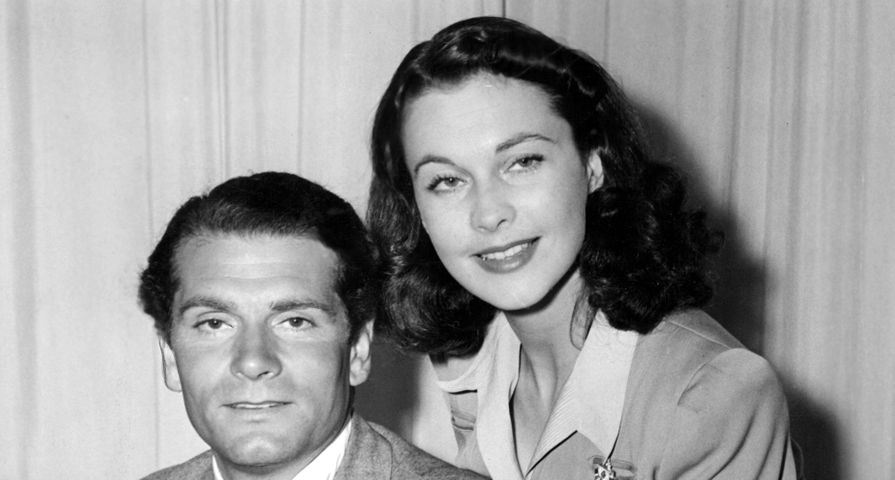 Spencer Tracy and Katharine Hepburn had a 27-year relationship despite the fact that he was married to another woman. Their relationship was definitely unusual as they were never seen in public together and never lived together because, as a devout Catholic, he refused to divorce his wife, Louise Treadwell. In total, Tracy and Hepburn made nine films together and, when he died in 1967 after suffering a heart attack, she didn’t attend his funeral out of respect for his family. When Hepburn called Treadwell to see if they could make peace, Treadwell reportedly told her, “I thought you were a rumor.” It wasn’t until after Treadwell’s death in 1983 that Hepburn finally acknowledged her relationship with Tracy.

Jean Harlow and Paul Bern had only been married for a couple of months when he was found dead in their home from a gunshot to the head in 1932. Harlow had been staying with her mother at the time. Although it was rumored that he was murdered by his common law wife who had been living in a Connecticut sanatorium but had traveled to Los Angeles on the night he died, his death was ruled a suicide. Five years after his death, Harlow met her untimely end. She was just 26 when she died of kidney failure.

Mike Todd was Elizabeth Taylor’s third husband and their marriage ended in the most tragic way – when he was killed in a plane crash while flying from Burbank to Tulsa. The couple had been married just over 13 months and had one child together. Although the union was tempestuous, she later said that she was the happiest when she was married to Todd.

Ava Gardner and Frank Sinatra’s relationship began as an affair as he was still married to Nancy Sinatra. When Nancy divorced him in 1951, he and Ava were able to marry, but their marriage wasn’t particularly stable or happy. Ava reportedly cheated on Frank continuously and the passion that the two had often boiled over into jealousy and led to numerous fights. They separated and reconciled several times throughout their short marriage before they finally divorced in 1957 even though the two still really loved each other. For the rest of their lives, the two remained close friends and when her health was on the decline later in life he arranged for her to see a specialist in the United States and even paid for a medically staffed private plane. When she died in 1990 of pneumonia, Sinatra was devastated and reportedly never got over it.

Lauren Bacall and Humphrey Bogart had one of Hollywood’s greatest love stories. They met on the set of To Have and Have Not while he was still married to his third wife, actress Mayo Methot, and began an affair. Even though the director of the film, Howard Hawks, and Bacall’s mother both disapproved of the relationship, there was nothing that anyone could say to change the actress’ mind – she was in love with Bogart. After he divorced Methot, he and Bacall were married in 1947 and they remained married until he died of esophageal cancer in 1957. Even though she was briefly engaged to Bogart’s friend Frank Sinatra following his death and was married to Jason Robards for eight years in the ‘60s, none of those relationships could ever compare to her relationship with Bogart.

Eddie Fisher and Debbie Reynolds were one of Hollywood’s golden couples when they were married from 1955 to 1959. However, their marriage ended abruptly following Elizabeth Taylor’s third husband Mike Todd’s sudden death in a plane crash in 1958. While in deep mourning, Taylor and Fisher began an affair, which took Reynolds by complete surprise. According to her, she was the last person to find out. Initially, she didn’t want a divorce because she didn’t believe in it, but after  Taylor and Fisher pressured her, she finally agreed. While Reynolds was able to eventually forgive Taylor, understanding that her friend was deep in mourning at the time of the affair, she wasn’t as forgiving with Fisher.

Marilyn Monroe and Joe DiMaggio’s marriage was passionate but so volatile that they divorced just 274 days after they were married in 1954. When they met, he was the bigger celebrity. He was arguably the New York Yankees’ greatest player of all time while she was just a rising Hollywood star. One of the big issues in their marriage was the fact that DiMaggio was uncomfortable with his wife’s “sex goddess” persona. After their divorce, Monroe married playwright Arthur Miller and, when they divorced, DiMaggio came back into her life. He reportedly asked her to marry him again, but she declined and they remained good friends until her sudden death in 1962. The New York Yankees star is the one that arranged her funeral and sent roses to her grave every week until his death in 1999. On his deathbed, he allegedly said, “I’ll finally get to see Marilyn.”

When Elizabeth Taylor and Richard Burton met on the set of Cleopatra in 1962, they were instantly attracted to each other even though they were both married to other people. While the two were able to divorce their respective spouses and marry each other, their marriage was notoriously tempestuous. They divorced for the first time in 1974 after 10 years of marriage and a string of affairs on Burton’s part, but they couldn’t stay away from each other for long. In 1975, they remarried but their second marriage lasted less than a year. The two remained close friends for the rest of his life and, even before his untimely death in 1984, he still wanted to give their relationship another shot.

Natalie Wood grew up having a huge crush on Robert Wagner. When she was 10 and saw him walking down a hallway at 20th Century Fox, she told her mother she was going to marry him – and marry him she did! In 1957, the two wed for the first time, but the marriage ended in 1962. Then, in 1972, they remarried and stayed married until her untimely death in 1981. Wood reportedly drowned when she, Wagner and Christopher Walken were spending Thanksgiving aboard her and Wagner’s yacht, and her death has since been shrouded in mystery with reports that she died as a result of a fight with Wagner, who became jealous upon seeing her flirting with Walken. Wagner has denied that anything of that sort happened and insists that everything with Wood was good prior to her passing.

Mary Pickford and Douglas Fairbanks were considered Hollywood royalty during their sixteen-year marriage and their Hollywood mansion, Pickfair, was one of the most celebrated homes in the world. Unfortunately, the public nature of their marriage and the duties they had as unofficial ambassadors for the U.S. ended up straining their relationship to a breaking point. The marriage officially came to an end in the early ‘30s when he began having an affair with Sylvia Ashley, but the couple didn’t end up divorcing until 1936. Even though Fairbanks left Pickford for another woman, the two always regretted that they could never reconcile.

For Clark Gable, Carole Lombard was his one true love. The two were married in 1939 and stayed married until she suddenly died in a plane crash in 1942. Following her death, Gable never recovered. He left her bedroom unchanged and, despite remarrying twice, told his friends that he didn’t care whether he lived or died. When he died in 1960 at the age of 59, he was buried beside her at Forest Lawn Cemetery in Glendale, California, despite the fact that he was married to his fifth wife, Kay Williams, at the time.

When Vivien Leigh and Laurence Olivier first met, they were both married to other people, but that didn’t stop them from beginning an affair in 1936. The two left their respective spouses and were married in 1940. While their relationship was passionate and full of love, it was also turbulent because of Leigh’s struggles with bipolar disorder. In 1960, their relationship completely came apart when Leigh began an affair with Jack Merivale and Olivier moved on to actress Joan Plowright. Even after the marriage was over, Leigh never really got over Olivier and she once told an interviewer that she would rather have “lived a short life with Larry than a long life without him.”