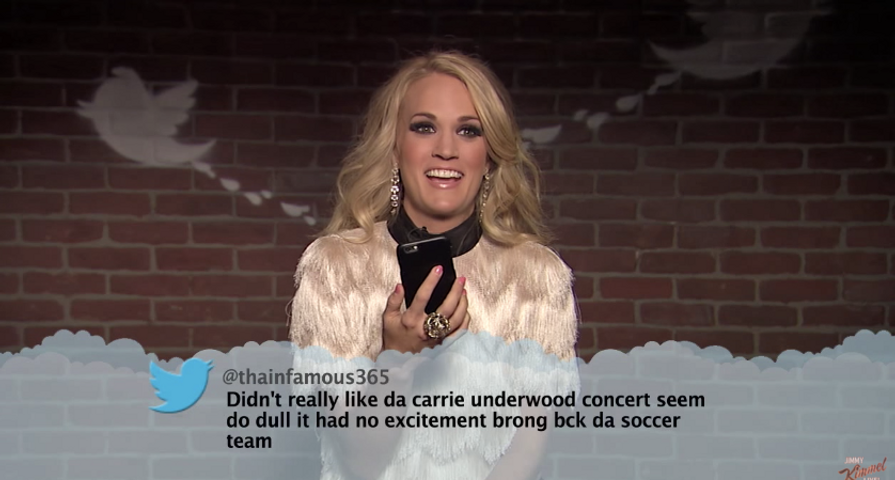 Late night talk show host, Jimmy Kimmel introduced a segment called “Celebrities Read Mean Tweets” a while back on his show, Jimmy Kimmel Live! It started out just as just a one time funny sketch where he would have his guests read mean things people have tweeted about them on the Internet, but it turned out to be such a huge hit with his audience, he’s now gone on to create many more with special editions for celebrities across the board — athletes, actors, singers and more. It’s hilarious to see the reaction of these celebs when they read the mean things people have tweeted about them and to hear what these people have said about them! Here our list of the 8 best celebrities read mean tweets:

The Twitter world can be a battle field, and A-list celebrities are constantly coming under fire. Jimmy Kimmel released his ninth edition of celebrities reading mean tweets and it had some big names like Liv Tyler, Elizabeth Banks, Daniel Radcliffe, Michael B. Jordan, Julianna Margulies and Colin Farrel. This one is so good it’s hard to pick a favorite, but Kurt Russell’s is definitely up there as one of the best. He seemed to take it like a champ and found it pretty funny too!

This particular segment was inspired by the magical night otherwise known as the Oscars. It featured many of the Oscar nominees like Eddie Redmayne and Cate Blanchett, but the best one just might have to be George Clooney who got called a gross ratty old man! Now that’s a first… Check out these A-list movie stars attempting to read their meanest tweets with a straight face.

This particular edition was inspired by this year’s Grammy event and featured some of the hottest musicians on the radio like Drake, Demi Lovato, One Direction, Blake Shelton, Kelly Clarkson, Meghan Trainor, Ed Sheeran and more! We’re actually quite surprised some of these artists got off easy, hint…hint One Direction. Our favorite one to watch was definitely Mumford & Sons, Lionel Richie and Blake Shelton!

Celebrities read “Mean Tweets Live” was part of an entire week of shows where Jimmy Kimmel invited celebrities onto his show to read their mean tweets infront of a live audience. It was pretty hilarious! Each celebrity stepped out from behind a curtain to read off their cell phone some of the funniest things people had tweeted about them and we must say some of these stars had some pretty good comebacks…we’re looking at your Benedict Cumberbatch! Some of the best guests were Jack Black, Kristen Bell, Toby Maguire, Bette Midler and Andrew Garfield.

This was definitely a unique one! We’re pretty sure they filtered through these ones more so than they do for some of the celebrities, regardless they are still pretty hilarious and he’s always got something to say back! We must admit it’s pretty funny to see the President of the United States sitting on Jimmy Fallon sifting through silly tweets from Americans like the price of beer and that his hair is getting grey.

This segment was one of the first celebrities read mean tweets, and while it isn’t necessarily a special edition, we just had to include it because it’s way too funny. This clip is stacked with A-list celebrities reading some of the most hilarious things people have said about them on the Internet. For example that David Blaine’s voice looks like it’s putting his face to sleep and that Don Rickles looks like Yoda! Okay…that one is kind of true. Some of the big names on in this sketch are Julia Roberts, Ashton Kutcher, Courteney Cox, Mindy Kaling, Ethan Hawke, Matthew McConaughey and more! Some of these celebs find these peoples comments pretty funny too! And the award for best comeback in this one goes to Sofia Vergara!

This edition had some of the biggest pop, rap, rock and country stars reading some of the meanest things people have tweeted about them featuring big names like Zac Brown Band, Demi Lovato, Selena Gomez, Jared Leto, Adam Levine, Pharrell Williams, Backstreet Boys, John Mayer, Katy Perry and more! And we agree with Lil Wayne…we’re not quite sure what a crabapple is.