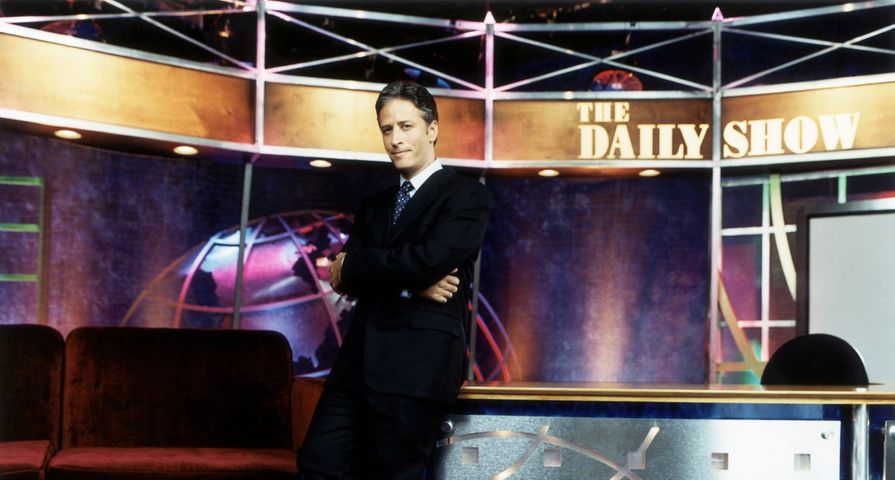 The Daily Show will stick around, but Jon Stewart has stepped out for a drink. Yeah. He’ll be back on the show sometime as a guest, and it’ll be awkward like the first time seeing an ex when you’re out with a new love. It’s not to say fans of the show won’t warmly welcome Trevor Noah, and hopefully offer a grace period as he warms into his role, but… we were all hoping Jon would take this run to the grave. In saying farewell, here are seven iconic moments that stemmed from Jon on The Daily Show.

It only just happened — relatively speaking — but Jon Stewart went out with The Daily Show, just as he came in. Relatively quiet. With his departure, he refused to say goodbye. Instead, he decided he’d “go out for a drink.” The final show was heavy. Not sorrowful, but the weight of finality was evident in the studio audience, every member of it hanging on Stewart’s last word. Of course, Jon remained true to form, and offered plenty of commentary about all things warranting comment. Never has he held the nation’s attention the way he did on August 6, 2015, and he was kind with it. No unnecessary patting of his own back, no self-gratifying tears — just that delightful self-deprecation suggesting he is still working to figure it out. There’s a gracious confidence in this guy that is worth noting.

Back in 2005, Jon hosted a week of scientific discussion, and it was at this time that The Daily Show was really firing on all cylinders. “Evolution Schmevolution” wasn’t an attempt at mockery, or finger pointing or name-calling… OK, there were elements of all these things. Ultimately, it opened a new forum and focus in the realm of late night talk shows that were geared toward comedy, and not by inviting people who put wild animals on display, which everyone also loves. Normally, this was the kind of discussion you might see on Larry King Live from time to time, but Jon offered a paneled discussion of leading experts and authors in the field of various scientific studies. Sure, the schtick was was evident in the segment title, but the segment itself was full of fascinating discussion.

5. The Daily Show vs. Crossfire

Remember that show on CNN called Crossfire? It debuted in 1992, and in 2004, Jon Stewart was invited to be a guest. Things did not go as planned. This wasn’t technically a moment on The Daily Show, but it was all about the format of The Daily Show, and how Jon Stewart approached the news, politics and his spectrum of covered topics. Jon turned the tables, and addressed both sides of the political spectrum. On this particular evening, he was rapping with Paul Begala and Tucker Carlson, and he took them to task. He hammered them to such a degree that CNN cancelled the show in 2005. And when they cancelled the show in 2005, they cited Jon Stewart’s voice as one of the reasons why. For those who have never seen it, find it. Watch Tucker Carlson run backwards faster than anyone in the history of running backwards.

Malala Yousafzai first appeared on The Daily Show in 2013, at the age of 16, and shared a bit of her story. She has become a worldwide phenomenon regarding the spirit of freedom, justice, fair treatment and the rights to education, particularly for women. She is Pakistani, and as an outspoken young woman, she lived with a target on her back when Taliban forces took over her town, and the surrounding Swat Valley region. She was eventually hunted, captured and shot by Taliban, but she survived and went on to speak louder and more boldly for what she believes. She became the youngest individual to ever be awarded the Nobel Peace Prize, and she left Jon Stewart and The Daily Show studio audience with their jaws on the floor.

3. Rally to Restore Sanity And/Or Fear

Fans of The Daily Show will remember back to the days of Stephen Colbert, Steve Carell and Nancy Wall as the greatest news correspondents any show has ever assembled, but after Stephen Colbert left to devise and fly The Colbert Report, he maintained an incredible rapport with Jon Stewart. In response to Glenn Beck’s Restore Honor In America rally, Jon Stewart, The Daily Show, Stephen Colbert and The Colbert Report, put together an epic Washington, D.C., rally. It was attended by more than 200,000 — they were hoping for 25,000 — and it became the subject of incredible political chatter. Talk about having the last laugh. Jon Stewart and Stephen Colbert have done more for opening the political eyes of Americans through satire than most politician has offered through their “truths.”

Regarding the two gentlemen named Stephen/Steven on the early days of The Daily Show, who would have guessed that they’d both become two of the brightest shining stars in global mass media? Stephen Colbert is in his niche, and Steve Carell is strutting his skill set as an actor. Colbert has scored The Late Show, and Carell has scored Oscar nominations. They’re both doing exactly what they wanna do, and their explosive talent was first recognized on The Daily Show, particularly during the recurring point-counterpoint segment known as Even Stevphen. When you stop to think about these three bright, shining stars on the same 30 minute program… it is crazy. Fortunately, these mini-debates are easy to find all over the Internet.

The Daily Show premiered in 1999, and it was met with moderate success. Jon Stewart was well known in the realm of comedy, and he was quite well informed as a comedian, so it made sense. The show clunked at times, coughed during start up, backfired and employed a host of other automotive analogies that refer to fine tuning a vehicle. Then, the 2000 election rolled around, and gave birth to the American era of stupid. This was like handing candy to a child, and saying, “Eat as much as you want!” Jon Stewart feasted on the election recount, and was as flabbergasted as the rest of America when George Bush was announced the winner, thanks to the United States Supreme Court. Indecision 2000 offered The Daily Show its direction for the next 15 years, ironically, playing off the history that was made during those two months.