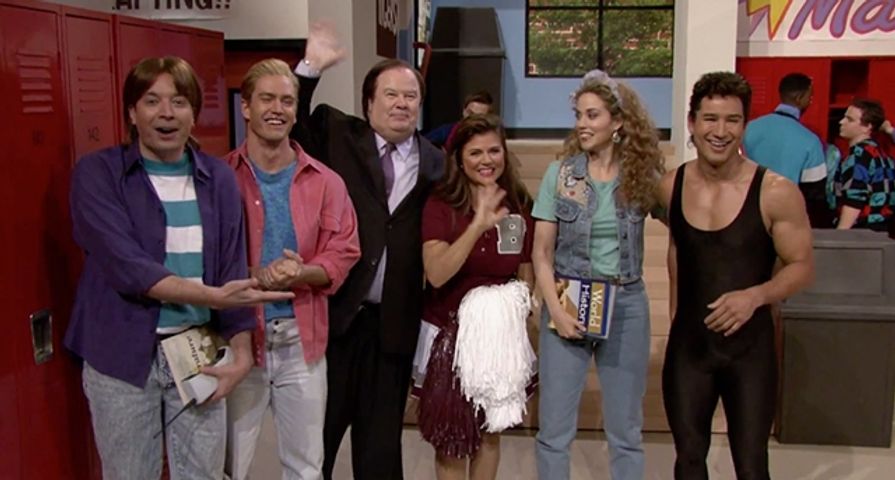 Jay Leno was a staple in late night television and, upon his retirement, many wondered who could possibly be up to the task of carrying on his legacy, and not only did his replacement respond, he’s carving out a legacy all his own. Jimmy Fallon took over as the host of The Tonight Show on February 24, 2014 and, a year and a half later, no one can remember a time without him as a host. After almost every episode, a viral video seems to come out from the night’s show thanks to Fallon’s own incredible comedic ability, but of course thanks to the huge stars he gets to come on the show to not only interview, but to play ridiculous games or participate in hilarious sketches. There have been a lot of highlights from The Tonight Show Starring Jimmy Fallon, but here are 10 of the absolute best.

Probably one of the most underrated celebrity interviews on Fallon’s show, in April 2015, comedienne Kristen Wiig showed up dressed as the very popular Game of Thrones character Khaleesi/Daenerys Targaryen, and the exchange between the two was hilarious. Fallon’s laugh is infectious so it didn’t help he could barely pull it together because of her outfit complete with a dragon on her shoulder, and her responses to his questions are side-splitting funny. Needless to say, the “Rapid Fire Questions” did not go so rapidly as both could not contain their laughter. If this is one Fallon interview you have missed, it is most definitely a must-see.

The best part about Jimmy Fallon’s show is that it is in no way a typical interview format. Although he does talk to his celebrity guests about their latest projects, he also gets them to open up and have fun in a way that fans rarely get to see. One of the best games Fallon has played is “Musical Beers,” and not only did he get to play the game, which seemed amazing, he played it with both Chris Hemsworth and Hugh Jackman, as well as a few of Saturday Night Live comedians. We all only wish we could play drinking games with our favorite stars, let alone two sexy superheroes, not to mention the whole thing was made that much better by the fact they were wearing mullet wigs. To watch the video click here.

8. Box of Lies with Channing Tatum

Back in November, 2014, Channing Tatum was in the midst of conducting serious interviews for his serious role in Foxcatcher, so leave it to Jimmy Fallon to get Tatum joking around again. The thing about Tatum is he seems like he would be everybody’s buddy and watching him and Fallon try to lie to each other and not burst out laughing the whole time was hilarious. “Box of Lies” is one of Fallon’s best segments and watching them try to talk about a Chewbacca toy stuck in Jell-O and E.T. tucked into a sleeping bag is exactly why the videos go viral.

Fallon’s lip sync battles have become so popular that it spawned an entirely new TV show based solely on celebrities battling it out by lip syncing to songs. Of course, the one thing the show doesn’t have is Jimmy Fallon competing against every celebrity, meaning The Tonight Show still has some of the best matchups. That much was obvious when Ellen DeGeneres battled it out with Fallon in one of the best editions of the segment ever. While Justin Timberlake declared DeGeneres the winner thanks to her renditions of “Do You Know Where You’re Going To?” and “B-tch Better Have My Money,” it’s Fallon’s dancing that made this one of the best ever. While lip syncing to “Watch Me (Whip/Nae Nae),” Fallon not only “Whips” and “Nae Naes,” but even does the “stanky leg.”

Brad Pitt likes to joke around, but no one knew he liked to dance around as well, that is until he had a “Breakdance Conversation” with Jimmy Fallon. In promotion of his film at the time, Fury, Pitt opted out of a regular interview and instead joined Fallon in an underground carpark where they showed off some amazing talent, breakdancing on cardboard boxes. While there were most definitely body doubles used, it didn’t stop audiences from absolutely loving the sketch and it quickly became a fan favorite of Fallon’s many unique and hilarious ways of interacting with his superstar guests.

Jimmy Fallon’s “Ew!” sketch is guaranteed to get laughs every time, not only because he is dressed up in drag as a teen girl, but because he gets other actors to do it as well and one of the best was with Neighbors co-stars Zac Efron and Seth Rogen. Obviously the concept alone is enough to make audiences love it, but seeing Rogen in a dress and wig but with a beard is fantastic, not to mention his struggle of imitating a teenage girl voice. The dedication Fallon and his guests put into the sketch is what makes them great, especially when they’re dressed up as girls.

Daniel Radcliffe will forever be known as Harry Potter no matter how much he puts into his acting work and how hard he tries to vary it. What may have helped people see him in a different light, however, is the incredible and surprising showcase of rapping talents he displayed while on The Tonight Show back in October 2014. The segment immediately went viral and has over 76 million views on YouTube, standing as one of Fallon’s most notable episodes. Although Fallon wasn’t as involved while Radcliffe performed Blackalicious’ “Alphabet Aerobics,” Fallon did hold up each letter of the alphabet as Radcliffe rapped through and the look on his face as it speeds up is priceless.

Who knows, maybe the lip sync battle segment would not have been so popular if Jimmy Fallon’s first opponent hadn’t been the hilarious and talented Paul Rudd. On Fallon’s second day on the job as host, he introduced the competition sketch and it still goes down as one of the best Jimmy Fallon Tonight Show moments ever. Rudd’s rendition of Tina Turner’s “You Better Be Good To Me” was funny, but it was his performance of “Don’t Stop Me Now” by Queen that really stole the show. Although Fallon had a good showing of his own, he knew he had been beat, literally bowing down to Rudd and beginning the audiences love affair with “Lip Sync Battle.”

Of course the only lip sync battle that could beat Fallon’s very first against Paul Rudd is his battle against actress Emma Stone from April 2014. The sketch was so popular that it has become the most highly-watched online video out of every Tonight Show Starring Jimmy Fallon episode. While the competition started off slow, it picked up very quickly when Stone busted out a rendition of “All I Do Is Win” by DJ Khaled and Ludacris. Her facial expressions and exact lip syncing brought down the house even causing Fallon to declare, “That was the best one that’s ever been done on the show!”

1. Saved By the Bell Reunion

The internet all but exploded back in February, 2015 when Fallon put together arguably his best sketch of all, making all ’90s kids dreams come true by staging a Saved By the Bell reunion. As per usual, the sketch was done to perfection as Fallon almost completely recreated the Saved By the Bell set and brought back almost all of the Bayside favorites (Screech and Lisa weren’t there) and implanted himself right into the group. The fact that they all almost look exactly as they did when the show was on air (with even Mr. Belding showing up) was enough to solidify this as the best thing Jimmy Fallon has ever done in his time as host.