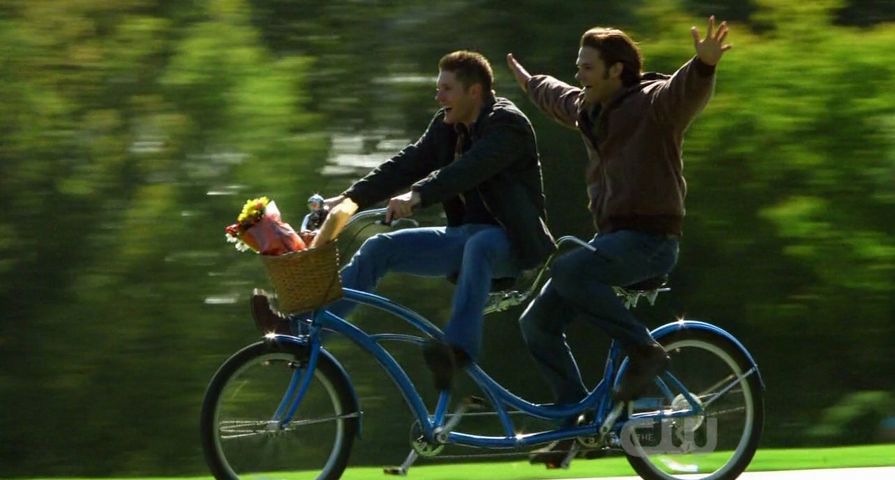 As far as CW series go, Supernatural is one of its darkest, but at the same time, one of its most successful. Despite its dark, sometimes twisted and sometimes gory episodes, it is also extremely funny and the humor has been one of the show’s strongest qualities for all 12 seasons. The natural chemistry between Jared Padalecki and Jensen Ackles has made a lot of the jokes turn out incredibly well, not to mention Ackles’ penchant for being a jokester. Take a look back at 10 of Supernatural’s funniest episodes yet:

Season three’s “Mystery Spot” hit a nostalgic spot with a lot of fans thanks to its “Groundhog Day” inspired premise. The running joke of Sam repeating the same Tuesday again and again and waking up to Asia’s “Heat of the Night” is hilarious. Granted it wasn’t fun or funny to watch Dean die over and over in different ways, but the majority of the episode is definitely one of the most memorable when it comes to humorous Supernatural moments.

It seems quite a few of the funniest episodes were in the earlier seasons but not season nine’s “Dog Dean Afternoon.” Fans are well aware that Jensen Ackles has a talent for comedy and it was on display in this episode where Dean takes a special potion in order to be able to understand and speak to canines. Of course Dean also starts to take on some of the characteristics of his four legged friends which makes for an even more entertaining episode, not to mention heart warming when he sets the animals free.

With an episode title like “Criss Angel is a Douche Bag,” it is unsurprising that this episode from season four has been one of the funniest. Although Criss Angel never made an appearance, there were quite a few jokes at his and his profession’s expense, but one of the funniest moments is when Dean is sent to an S&M dungeon with “Chief” who tells him, “Oh, you ain’t been had till you been had by the Chief… Oh, and before we get started, what’s your safeword?”

Sure, the beginning of the season six episode “Two and a Half Men” isn’t funny as a family has their baby stolen, but the rest of the episode makes up for it. Naturally, Sam and Dean are the ones that end up with the baby and absolutely no idea what to do with it, and fans couldn’t get enough of the Winchesters trying to figure out how to care for a baby. Audiences have seen the pair tackle a lot of obstacles and do a lot of things, but the way in which they struggle with baby-sitting is truly comical.

Like many of Supernatural’s funniest episodes, season five’s “The Real Ghostbusters” is so good because it plays on Supernatural fandom in the real world. If one pair of Sam and Dean isn’t good enough for audiences than the episode is the best as two sets of the Winchester brothers help fight the ghost, making for some extremely funny lines and moments, not to mention the real Sam and Dean have a ton of fun hiding who they are as Chuck holds a Supernatural comic-con.

It seems that sometimes fans like to bask in the unfortunate circumstances that seem to befall the Winchester brothers, as long as it isn’t tragic. Season three’s “Bad Day at Black Rock” is the epitome of unfortunate circumstances for Sam as he finds himself plagued with some serious bad luck which naturally leads to the most hilarious lines and moments. One of the best parts of this episode is that it provided fans with some of the best Supernatural lines to quote, especially Dean’s “I’m Batman.”

The Ghostfacers are a part of Supernatural history which positions them as a spin-off within the series, and season three’s “Ghostfacers” episodes saw the return of the paranormal investigators resulting in a laugh-out-loud episode. The episode was unique because it was shot from the perspective of the crew, and was extremely funny because it has never been more clear that the team had never come even close to anything supernatural before teaming up with Sam and Dean.

Supernatural fans are well aware that the show is unlike any other in the way it goes ahead and pokes fun of its stars, itself and TV series in general. This was never more obvious than in the season five episode “Changing Channels” where Sam and Dean spoofed all kinds of TV hits from CSI to Grey’s Anatomy and even Japanese game shows. While some episodes get heavy both psychologically and emotionally, the light-hearted tone of “Changing Channels” was a bit of a jump, but it worked flawlessly and is without a doubt one of the show’s funniest episodes of all.

“Tall Tales” is often overlooked by fans now because it was way back in season two, but looking back on the episode, it was not only a very good one, but one of the funniest. The brothers descend upon Springfield, Ohio, where something strange is definitely going on and they need Bobby’s help. The best part, however, is each of their descriptions about exactly what is going on, which include some very exaggerated stories leading to some hilarious moments. Best of all, it was the first episode which introduces The Trickster who would become an integral part in the Supernatural story.

Source: Music In The Dark

If fans thought Supernatural couldn’t go any further with breaking the fourth wall or poking fun at themselves, they hadn’t seen anything until season six’s “The French Mistake.” Sam and Dean were transported to an alternate universe where they were none other than actors Jared Padalecki and Jensen Ackles who star on a TV show called Supernatural, and of course it was absolutely hilarious. From making fun of the name Jensen to Dean’s Jensen not getting along with Jared to neither one being particularly skilled at acting, the entire episode may seem frivolous, but in fact was an expertly crafted episode.