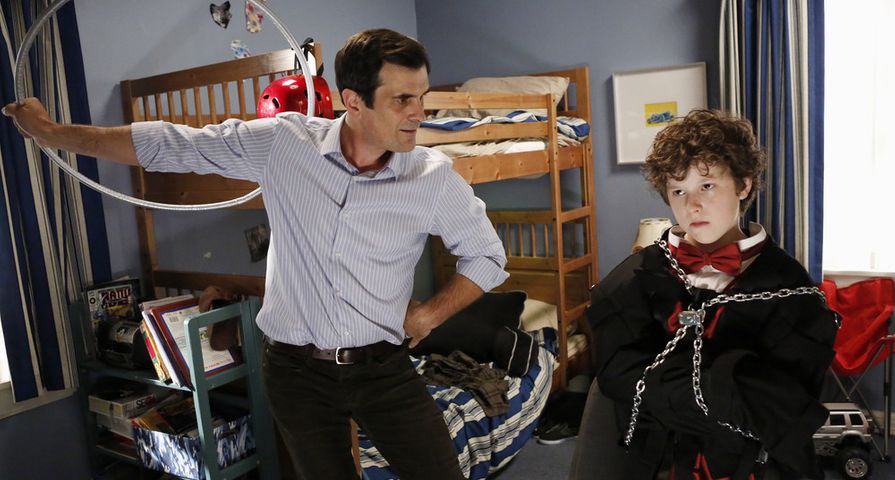 Modern Family is one of the best sitcoms on television right now. The show takes on the hilarious concept of a very blended family navigating their way through their relationships with one another, whether it be between sisters, brothers, sister-in-laws, or learning how best to parent their children — especially the father-son duos! We love to see our favorite character Phil interact with his son Luke. Most of the time Phil is more of a friend to Luke than a parent. It’s such a great relationship. The two of them have more in common than just a family name — their personalities on the show feed off one another so well it sets the stage for a lot of laughs. We definitely see where Luke gets a lot of his quirky ways and it’s adorable how Phil cheers him on. Here are 8 of the best father-son moments between Phil and Luke:

Luke is sent home from school because he’s sick. After a heart to heart with his dad, Luke confesses that he got sick because he ate so much candy. Phil decides Luke has learned his lesson and he doesn’t need to punish him. Instead, the two take on the task of attempting to walk across a tightrope. Phil is unable to get across the wire that is six feet off the ground without falling, so Luke offers his advice. He thinks Phil keeps falling because the wire is too low and he knows he can fall from that height. Phil is so gullible he listens to his son’s advice and decides to raise the stakes. When Claire gets home she doesn’t find Luke being punished, but rather him filming his father as he walks across an extremely high tightrope. In this episode, some roles are reversed as Luke helps his father conquer his dream, and as Claire would say, Phil “walked the walk” in terms of his unique parenting skills. He taught his son the lesson that if you work hard enough at something, you can accomplish anything. He’s also incredibly happy because he now has “two ways to get across his yard.”

Phil doesn’t want to accept the fact that “The Great Lukini” has lost interest in magic. He’s upset he’s about to lose a common interest with his son and afraid that it means he’s slipping away from him as he gets older. Phil eventually tells Luke that he can decide to do whatever he wants and that his father will support him no matter what, but before he gives magic up entirely, he must accomplish the infamous trick, ‘the butler’s escape.’ This way Phil will know it’s not because Luke isn’t good at magic, but rather he truly doesn’t enjoy it. It turns out Luke is actually very good at doing magic tricks, and to Phil’s dismay, he’s better than him! He eventually finds out that Luke doesn’t want to partake in the hobby anymore because he gets bullied at school for practicing his dark arts.

Phil tricks Luke into going to a dance class with him by calling it “Autopsy Camp.” He drags him here because he wants Luke to follow in his father’s footsteps (literally) and take an interest in dance. When Luke realizes where he is, he’s not happy, especially since he’s the only boy in the class. His hair even gets stuck in another girls braces. The episode takes a turn when Phil ends up getting a taste of karma as he’s arrested for a bunch of unpaid parking tickets that have accumulated thanks to his daughter Haley. Luke stands by happily and even decides to snap some incriminating photos of his father being hauled away by the cops.

Phil and Luke go looking under the house (or should we say, ‘Casa de Dunphy’) for buried treasure, but Phil backs out because he’s too scared to crawl into the dark spaces. This episode is about parents helping their children face their fears as each of the kids suffers from their own: Haley is afraid of failing her driver’s test for the third time; Manny doesn’t want to join the party at an amusement park because he’s scared of heights; and Alex refuses to go to the school dance in fear of being alone. In each of these instances, their parents encourage them to overcome their fears, but when it comes to Luke and Phil, Phil is the one that needs to be rescued by Luke. Phil attaches a video camera to Luke’s remote-controlled truck and sends it into battle to see what lies ahead in the dark crawl space. Phil tells Luke, “This is how NASA does it,” but we are pretty sure their missions are a little more complex than this father and son duo. It all goes wrong when Luke’s truck gets stuck in the crawlspace and Luke must go retrieve it, but things go wrong when Luke’s belt gets stuck on a pipe and Phil must push aside his fear to rescue his son. Does this make Phil a hero? According to Phil, yes it does.

Phil decides he wants to use spring break to spend more quality time with his son, Luke. However, Phil becomes increasingly competitive with his son as Luke starts to outperform him in every activity they do together, like playing the banjo or trampolining. Claire is excited that Luke is learning these new things so quickly, which makes Phil feel even worse that he’s not succeeding at all the things he used to be good at and it reminds him that he’s getting older. He’s faced with the fact that his relationship with Luke is changing as Luke gets older — the teacher is becoming the student! Later in the episode, he finds a bra under Luke’s pillow and immediately thinks the worst. He takes his frustration out on Luke by yelling at him for not following the ‘house rules’ of no girls in the bedroom. He grabs the banjo from his hands, but as he does this a string snaps and hits Luke in the eye. While on the way to the hospital, Phil apologizes for his behavior and Luke confesses that he stole the bra to practice how to undo it. In this episode, Phil is forced to learn how to deal with the two of them getting older and how their father-son dynamic will change over the years.

Luke and Haley both have big school projects due the next day, so Claire decides to divide and conquer. She tells Phil to look after Luke for the evening and make sure that he stays focused on his project, but Phil doesn’t want to micromanage Luke. Unlike Claire, Phil always has faith in his son. Alex is researching ADHD and begins to recognize some of the symptoms in her family members, mainly Phil and Luke. Throughout the entire episode, Phil and Luke continue to get distracted by the simplest things. To begin the project, Phil hands Luke a pencil which leads to the two of them to question how the pencil is made…how does the lead get inside the pencil? It doesn’t take too long for the two of them to get sidetracked and begin researching how pencils are made on the internet. Phil finally catches himself, realizing what he’s doing and decides they need to get back on track. Like father like son. He leaves Luke alone to finish the project. When Claire and Phil check up on him later, they find him dismembering a Mr. Potato Head and Phil thinks he should have listened to Claire and been more strict with Luke. But just as Phil is about to apologize to Claire for not underestimating him like she did, Luke walks downstairs with an entirely finished van Gogh project. The Mr. Potato Head was to represent how Gogh cut off his ear — Ah ha! Phil learns to never underestimate his son — he should always have faith in him.

After Luke shoots Alex with his plastic BB gun, Phil is forced to follow through on his promise to Claire: if Luke shoots someone, he has to shoot Luke. Phil doesn’t want to hurt his son, so he tries to reprimand him with a simple comment, “uncool Luke!” But Claire wants more from him, so the family schedules in a time on the calendar between all of their busy schedules for Phil to shoot Luke. When the time comes, Luke is afraid. He comes downstairs with layers upon layers of clothing, six pairs of underwear, goggles, a hat, gloves and even a winter jacket. After telling him to shed some of his protection, Phil can’t bring himself to shoot Luke. Seeing his son so terrified is justice enough for Phil, but when he goes to put the gun down he accidentally shoots Luke, then turns around to talk to Haley and her boyfriend and accidentally shoots the boyfriend in the neck and then himself. It’s the perfect comic routine.

Phil wants to buy Luke his own bike, but Claire thinks Luke isn’t responsible enough to take care of it. Phil in his typical fashion always sees the best in Luke and wants to prove Claire’s doubts wrong, so he goes out and buys Luke his very own bike. Later that day Phil is walking along the street and sees Luke’s bike unlocked outside a store. He decides to teach Luke a lesson, so he steals the bike and rides it home. On his way home he gets distracted helping a neighbor and leaves the bike on the front lawn. When he comes back out the bike is gone — for real this time! Phil doesn’t want to confess anything to Claire, so he decides to go back to the shop and buy another bike to replace it. After buying another bike, Phil sees Luke with the original bike…so who’s bike did Phil take earlier that day? He goes back to the store to return the one he just bought and some kids chase him off for stealing their bike. When Phil finally gets home and thinks he’s in the clear with everything, the neighbor comes over to return the original bike that Phil had stolen. It seems her neighbor picked it up off the lawn and put it in his garage to keep it from getting stolen. Claire overhears all of this, sees Luke on his own bike and Phil with a second exact same bike…instead of Phil having to fess up about Luke being irresponsible, turns out Phil is the irresponsible one!