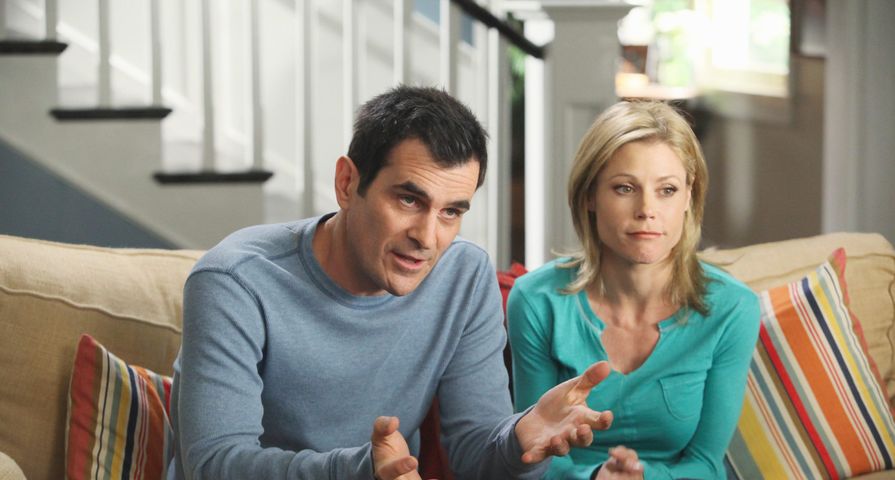 Modern Family has easily become one of the most popular shows on air right now. The show premiered back in 2009 as a mockumentary American sitcom about a blended family living in Los Angeles. The cast is stacked with great actors like Julie Bowen, Sofia Vergara and Ed O’Neill and the humorous storylines are a constant hit. Modern Family has won numerous awards throughout all 9 seasons and received rave reviews from critics as a successful comedy series. We always want to know more about our favorite Dunphy-Pritchett family, so here’s a look at some fun behind-the-scenes secrets from our favorite family sitcom:

10. The Storylines are Real

Many of the storylines that appear on the show have actually happened in real life! These are the true tales lived by the creators of the show. “What will happen is we’ll be at the kitchen table…I try to very quietly take out my phone and start to type what people are saying,” said co-creator Christopher Lloyd. “My kids will notice it and they’ll say. ‘Put that away. That better not be in the show.’ That happens a lot.” A lot of Cam’s backstory comes from his actual childhood. Eric Stonestreet, who plays Cam who grew up in Kansas, changed that part of his backstory to Missouri so that he wouldn’t be poking fun at his actual home state. On the show, Cam comes from Tonganoxie which is the rival school of Stonestreet’s high school. He also used the name Don Jolly in an episode which is a man who lives across the street from Stonestreet’s parents. In addition, Jesse Tyler Ferguson told producers the story about how in real life he had to come out to his father three times before he actually accepted it, and the writers made that part of Mitchell’s story.

When working on a television set, there’s limited space. So sometimes one space operates as several different locations. On Modern Family, the bedroom shared by Alex and Haley doubles as Phil and Claire’s bedroom! On the days when the producers need to shoot a scene in the girls’ bedroom, all the furniture that makes it Claire and Phil’s bedroom is taken out and stowed away. There tends to be more scenes featuring the Dunphy girls’ room rather than the parent’s bedroom.

8. Lily was Played By Twins

When Mitchell and Cam’s daughter Lily was still a baby and small toddler on the show, her character was actually played by a set of twins named Ella and Jaden Hiller. Sarah Hyland, who plays the character of Haley Dunphy, said it was fun having the two little girls on set, but they were distracting because everyone wanted to hold them! She also said it was incredibly hard telling them apart (which is a good thing because viewers never even noticed it was two separate people), “It’s still hard to tell them apart. The only difference is the freckle one has by her left ear.” By the third season, the toddlers were burned out from acting and their parents pulled them out of the show, despite being offered more money to stay. Four-year-old Aubrey Anderson-Emmons was then brought in and given a shot at playing Lily, and she’s been with the cast ever since!

Eric Stonestreet plays the lovable character of Cam on Modern Family. One of the many quirks of his character is that he loves to dress up as a clown named Fizbo, who happens to also be a kind of alter-ego for him. The Kansas native actor actually did want to be a clown back when he was a child and Fizbo is a real childhood invention of his! “The truth is the Ringling Brothers came to Kansas City every year around my birthday and my parents took me. And it’s a line, literally, in the first Fizbo episode where Cam says: ‘I knew I wanted to be a clown when I realized clowns were just normal, regular people with makeup,'” said Stonestreet at Paleyfest 2015. When the writers of the show caught wind of this they wrote it into the script.

There is no doubt that Ty Burrel’s character, Phil Dunphy, is one of the best parts of the show. He’s definitely a fan favorite. What makes it even better is that his cast members have credited Burrell as being a lot like his character on the show. “There’s a certain amount of me in Phil that, hilariously, I can’t ignore. I’m prone to putting my foot in my mouth and being oblivious and delusional,” said Burrell during an interview with the Salt Lake Tribune in 2009.

In 2014, Sophia Vergara started dating True Blood star Joe Manganiello and soon after they became engaged! The cast of Modern Family is said to be extremely close; they are basically a “work family” since they spend so much time together and they’ve all done a lot of growing together. According to an interview with Rico Rodriguez with Bustle, Sofia was very concerned with the opinions of her cast mates on her new hubby, especially when it came to Rico who plays her son, Manny, on the show. He said, “I met him before all of that [the engagement] went down. She wanted to make sure I met him, and he is such a cool guy, so I was like, ‘Yeah, he’s good. I approve!”

4. The Cast Fought for Their Pay

In 2012 after the show had peaked in success and it was pretty clear they were doing quite well for themselves, the adult cast members banded together in order to negotiate a significant pay bump in their salaries. During this time, Ed ONeill was making the most money earning roughly $200,000 per episode! Meanwhile, the other cast members who worked just as hard were only earning around $30,000 to $90,000 per episode — that’s a significant gap. The rest of the cast demanded they get the same pay, and the producers held out for a while, forcing production delays for season 4, but in the end, O’Neill agreed to lower his salary to $150,000 per episode in order to match the other cast members. As of 2015, all the stars of the show make up to $10 million each year!

Jay’s dog (that Gloria hates), Stella, is actually a French bulldog named Brigitte. The dog first makes her appearance in season 2 and 3, but she had to be replaced unexpectedly after the animal acting agency in charge of subleasing Brigitte dropped her as a client. The reasons for this are unknown, but Stella is now played by another French bulldog named Beatrice — close enough! Of course, fans never noticed the difference!

There are many rumors and secrets that swirl about involving any show, especially regarding the network executives who oversee all of the production. One of the most interesting things that have surfaced about Modern Family is that ABC wasn’t exactly thrilled about the producers’ casting decisions. It has been widely reported that they wanted Craig T. Nelson instead of Ed O’Neill and ABC passed on having Ty Burrell play the character of Phil. Instead, they wanted Matt LeBlanc, and Kristen Johnston and Lisa Kudrow were in the running for Claire because Julie Bowen was pregnant at the time.

Rob Huebel was first considered to play the part of Phil Dunphy on Modern Family, but he really, really didn’t like the script. He told Splitsider during an interview, “When I read the script for it, I just hated it. That’s what an idiot I am. It’s the most popular show in the country, and I love that show now…I’m just a f-ckin’ idiot because I read the script for it, and I didn’t even go into the audition because I just hated it so much. I told my agent I didn’t just wanna pass on it. I wanted him to call them and aggressively pass, which is not even a real thing.” Those are some harsh words! There are no hard feelings now, and Huebel got his wish to be on the show because he went on to appear in the episode, “The One That Got Away,” in the character of Phil’s nemesis, Glen Whipple.