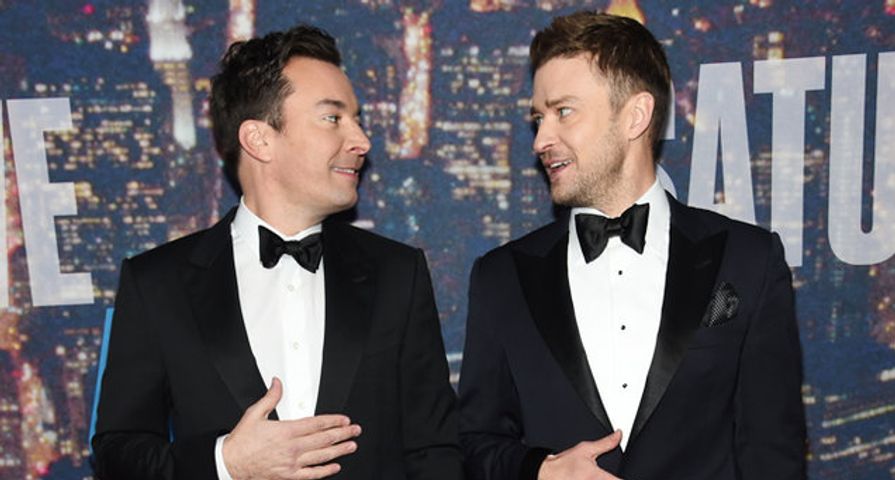 There are many bromances in Hollywood between actors, musicians, TV personalities and stand-up comedians, but one of the most beloved friendships is that of pop singer, Justin Timberlake and comedian, Jimmy Fallon. These two are definitely an unexpected duo, but we are so happy they found each other because together they are absolutely hilarious! They share the same sense of humor, care-free attitude and let’s face it — they come up with some of the best comedy skits we’ve ever seen! Fans can watch their loveable friendship play out on Fallon’s The Tonight Show as Justin is often a guest on the show either promoting his latest music or doing another improv comedy skit. Just because we love them so much, here’s a look at 7 things you might not have known about this dynamic duo’s friendship:

They first met one another at the MTV Video Awards back in 2002. At the time, Jimmy Fallon was a Saturday Night Live cast member and Justin was starting his solo career after being in the band ‘NSYNC. Fallon reminisced about when they first met and he said they kind of bonded over the shared pressure of that night as Fallon was hosting the awards for the first time that night and Justin was performing by himself without the backup of his band. “I remember talking backstage during those VMAs. I was totally nervous and you were nervous and we both ended up having a good night. We’re good luck to each other – like each other’s rabbit foots,” Fallon said. How adorable! Things came full circle in 2013 when Jimmy Fallon presented Justin Timberlake with the Michael Jackson Video Vanguard Award and gave a heartfelt introduction to his best buddy.

In a tribute for Jimmy Fallon in Time magazine, Justin revealed that his best buddy did something a little out of left field at his wedding — he interrupted his speech! This is a definite no-no for wedding etiquette, and Justin admitted if it was anyone else it he wouldn’t have been forgiving, but because it was Jimmy he thought it was worth the laughs. It was in the middle of an intimate speech to his new wife, actress Jessica Biel, at their Italian wedding back in 2012. Justin wrote, “Picture this: I’m in the heart of an impromptu speech at my wedding reception in front of 150 guests, pouring it out to my lovely new bride. You could hear a pin drop. I paused for just a moment in between thoughts. And then there was Jimmy, shouting a joke from his seat, sparking an improv between the two of us that went on for a good five or 10 minutes and had all our guests roaring with laughter.” He continued on with, “Interrupting the groom’s speech at the wedding reception? Cracking jokes when your buddy is looking desperately for the words to say that he hopes his wife will remember forever? It turned into a moment that everyone there will remember forever. Anyone else would have bombed on that stage. And then I would have kicked their a–.”

Today, Justin Timberlake and Jimmy Fallon are well known for their comedy skits and improv routines. Their first skits date back to the early 2000s before Fallon had The Tonight Show and was a cast member on SNL. The two appeared in a skit called The Barry Gibb Talk Show wearing three-piece ’70s suits while impersonating the Bee Gees brothers, Barry and Robin Gibb. This skit marked the beginning of their friendship and paved the way for many more skits to come. They’ve also reinvented the skit many, many times. Some of their best collaborations since then have been their “Evolution of End Zone Dancing,” “Celebrity Family Feud,” and when they pretended to be campers at Camp Winnipesaukee and sang Hootie and the Blowfish! They are both constantly trying to get the other to break character (Fallon is always the one who caves) during a skit which makes it even more fun to watch. There was also that one time they attended the U.S. Open and spontaneously broke out in an improv dance of Beyonce’s “Single Ladies!” Now that’s true friendship!

This is arguably one of their most popular skits — and they have a lot! The two discussed how they came up with the idea of doing the “history of rap” which quickly became one of the most viral videos in late night history. Fallon said they came up with the idea one night in the dressing room backstage at SNL. The two were just “shooting the sh-t” as Justin recalled and they asked each other what they wanted to do when Justin went on Fallon’s show later that week. Fallon said, “You were coming on my show later that week, and I asked, ‘What do you want to do?’ We both thought, well we could sing something. I wanted to do Toto’s ‘Africa.’ We could sing that song really well together.” Justin then said, “We were sitting there, and I said, ‘Do you remember that guy who did the history of dance?’ He did every song that had a dance or was named after a dance. It was a viral sensation. Then we just started kicking around medley ideas. Jimmy was like, ‘What if we did the history of all hip-hop and fit in as many songs as we can?'”

Justin Timberlake and Jimmy Fallon were fresh off hosting Fallon’s Tonight Show together when they took on the famed Saturday Night Live gig. It’s undeniable these two have great chemistry on stage with their musical performances, comedy skits and improv routines, so it seemed fitting that when Jimmy Fallon was asked to host Saturday Night Live back in 2013, he called upon his best friend Justin Timberlake to not do a musical performance, but also help him co-host the show. The episode was absolutely hilarious and featured some of the year’s funniest skits like the Celebrity Family Feud skit, Barry Gibb Talk Show and new skits with Fallon and Timberlake dressed up as Beatles members and as Christmas gifts who rapped about wrapping gifts….pun intended? The show went off without a hitch and we’re all counting down the days till these two host another show together.

Fans of JT will know that he’s from Memphis, so it’s no surprise that last year he was inducted into the Memphis Hall of Fame. Of course, who better to introduce this pop star than his best buddy, Jimmy Fallon. Justin and Jimmy are known for being one of the cutest bromances of all time, but this speech definitely takes the cake! Fallon’s speech went like this: “This is Justin Timberlake we’re talking about! Who better to induct him than me, Mrs. Timberlake. Jessica, I’m sorry. The heart wants what it wants…But as his friend I can tell you that this is such a big honor for Justin and it couldn’t happen to a more deserving guy…Justin has come along way in his career from a kid in the Mickey Mouse, club to a ’90s hit teen heartthrob who would go to a barber, point to a brick of ramen noodles and say “do this!” Now he’s one of the biggest stars in the world — he can sing, he can dance, he can act, he’s funny, he’s good looking, and if you don’t believe me ask Justin himself he wrote this speech. On top of all that, he’s a great friend and he’s a really hard worker. I mean, in all seriousness Justin works so hard at every single thing he does whether he’s recording an album, or going on tour, or just coming on The Tonight Show and doing a dumb comedy bit. He always gives it his all…He’s passionate about his hometown, he’s passionate about who he is and what he does. He’s always evolving, always looking to try something new, but still staying true to his roots. That is why he’s the success he is today. Justin, Memphis is proud of you, and I’m proud of you.” That is the sweetest best friend speech ever!

Imitation is the greatest form of flattery, right? Well in this case, maybe not, but at least we know that JT is coming from a place of friendship when he perfectly impersonates his good friend Jimmy Fallon. We’ve seen him do it while he was a guest on Fallon’s Tonight Show and again when they did their “Celebrity Family Feud” skit on Saturday Night Live. When he did his famous impersonation on the late night talk show he teased Fallon about how he always twitches his arms when he’s frustrated, but our favorite by far is the Family Feud routine where Justin went as far as putting on a wig and a suit and used some over the top excited dialogue to imitate Fallon. It was spot on!