Home » Entertainment » Celebrities » Cast Of Bridesmaids: How Much Are They Worth Now?

Cast Of Bridesmaids: How Much Are They Worth Now? 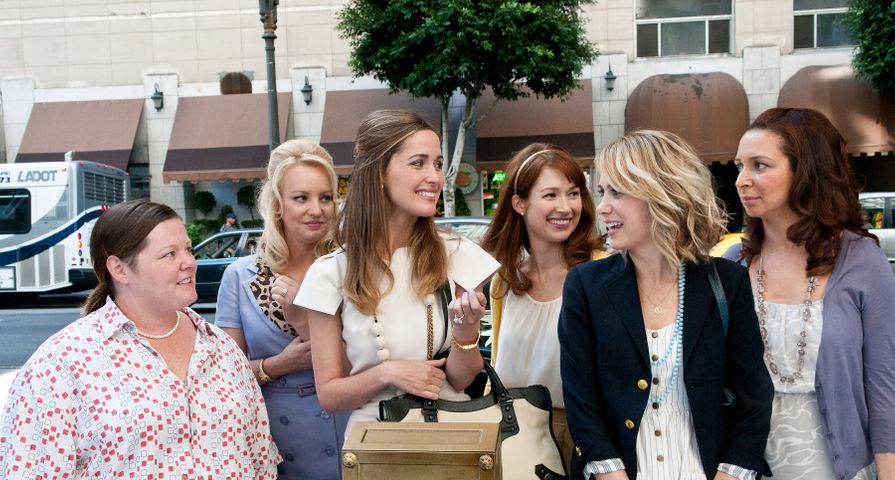 In 2011, the movie Bridesmaids blew the door wide open for not only female led comedies, but female led films as a whole. Director Paul Feig brought together the best of the best in comediennes with Kristen Wiig, Maya Rudolph, Rose Byrne, Melissa McCarthy, Ellie Kemper, Wendi McLendon-Covey and Rebel Wilson to star in the film which was an instant hit. It has now been five years since the movie premiered and as to be expected the talented cast as continued expanding their career. Check out how much the cast of Bridesmaids is worth now!

Estimated Net Worth: $10 Million. Matt Lucas is a talented comedian, writer and actor who appeared as Annie’s roommate Gil in Bridesmaids. He began acting 1995 and appeared in series such as The Smell of Reeves and Mortimer and Mash and Peas. He continued both acting and writing and is also best known for his work in numerous television series as well as appearances in Little Britain, Shaun of the Dead, and Alice in Wonderland. Overall his career has been very successful and he now has an estimated net worth of $10 million.

Estimated Net Worth: $1 Million. Chris O’Dowd played the adorable Officer Rhodes in Bridesmaids and has enjoyed a very successful career since he first began acting in 2003. He has been on multiple series including The Clinic, Roman’s Empire and FM, as well as movies like Gulliver’s Travels, Friends with Kids, This is 40, Thor: The Dark World, Calvary and St. Vincent. O’Dowd has also appeared on Girls and most recently in the series Moone Boy. All in all he is doing pretty well with a net worth of $1 million.

Estimated Net Worth: $16 Million. Rebel Wilson’s career has been in hyper drive since her appearance in Bridesmaids as Brynn. Wilson has become a comedic powerhouse in the industry and everyone wants to work with her. Before Bridesmaids she appeared in different lesser known shows and films, but has now gone on to appear or star in Bachelorette, What to Expect When You’re Expecting, Pitch Perfect, Pain & Gain, Pitch Perfect 2 and How to be Single. She shows no signs of slowing down either, ever adding to her already impressive estimated net worth of $16 million.

Estimated Net Worth: $16 Million. Rose Byrne began her career on Australian television series such as Heartbreak High and Echo Point, and got her first major film role as Dorme in Star Wars: Episode II- Attack of the Clones. Then in 2004, she starred opposite Brad Pitt in the historical blockbuster Troy and never looked back as her career sky-rocketed. She is also known for roles in Marie Antoinette, 28 Weeks Later, Get Him to the Greek, X-Men: First Class, The Internship, Bad Neighbors and of course as Helen in Bridesmaids. Her constant work has really paid off with an estimated net worth of $16 million.

Estimated Net Worth: $4 Million. Ellie Kemper spent years as doing her award-winning comedy shows before making the leap on-screen which has proven to be just as successful for the comedienne. One of her first major film roles was as Becca in Bridesmaids and in 2011 she appeared in 21 Jump Street as Ms. Griggs. She is also well known for her character Erin on The Office from 2009-2013, and for the acclaimed series Unbreakable Kimmy Schmidt which she stars in as Kimmy Schmidt. Overall Kemper is doing great since her breakout role and already has a net worth of $4 million.

Estimated Net Worth: $50 Million. It hasn’t taken long for Melissa McCarthy to be one of the biggest names in comedy in Hollywood. She has performed her own stand-up comedy and has been in various series and films including Gilmore Girls from 2000-2007. She also appeared in Charlie’s Angels, White Oleander, The Back-Up Plan and Life as We Know It before her role as Megan in Bridesmaids. She is also very well known for one half of the starring duo of the hit show Mike & Molly. In recent years she has starred in many films including Identity Thief, The Hear, St. Vincent and Spy while she is also slated to star in the new all-female Ghostbusters. With so much success on-screen and her own clothing line it isn’t surprising she is worth a very impressive $50 million.

Estimated Net Worth: $5 Million. Wendi McLendon-Covey did very well as part of the famous improv group The Groundlings where she was considered the Queen of Improv. From there she made her on-screen acting debut in the comedy series Reno 911! followed by small roles in films and shows like Bewitched, Over Her Dead Body and The Office before starring as Rita in Bridesmaids. She has gone on to star in many more projects such as The Single Moms Club, Blended and The Goldbergs. All in all McLendon-Covey has an estimated net worth of $5 million.

Estimated Net Worth: $4 Million. Maya Rudolph is best know from her days on Saturday Night Live from 2000-2007. She has been acting in movies and TV since the late ’90s starring in things such as 50 First Dates, Idiocracy, Away We Go, Grown Ups and MacGruber before starring as Lillian in Bridesmaids. Since, she has been in many other major films including offering her voice for Big Hero 6 and The Angry Birds Movie. Her hard work has paid off to the tune of $4 million.

Estimated Net Worth: $20 Million. Kristen Wiig is also best known for her time on Saturday Night Live from 2005-2012 in which she was one of the lead stars. She has appeared in several films and series over the years including Knocked Up, Walk Hard: The Dewey Cox Story, Adventureland, and Date Night before starring as Annie in Bridesmaids. She has since been in films such as The Martian and The Secret Life of Walter Mitty, as well as offering her voice to many major animated projects including How to Train Your Dragon and Despicable Me 2. She is also starring alongside Melissa McCarthy in the new Ghostbusters which will add quite a bit to her very respectable $20 million.