Ashton Kutcher And Mila Kunis’ Sweetest Quotes About Each Other 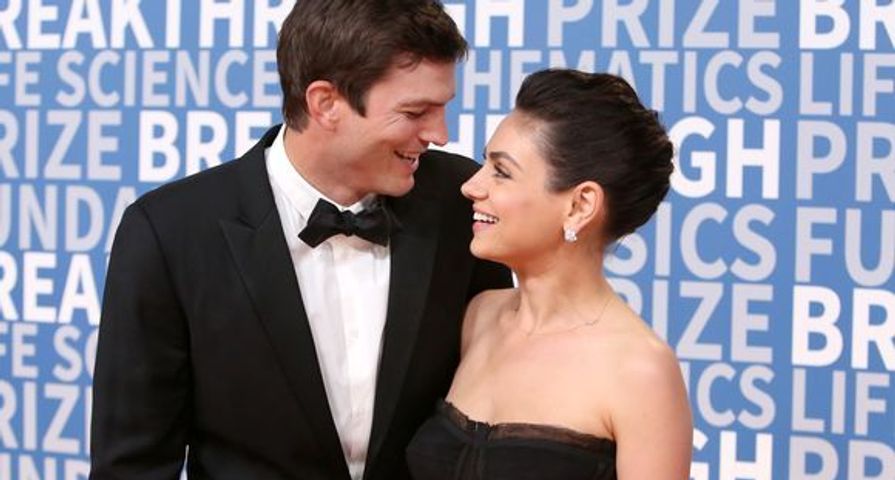 Mila Kunis and Ashton Kutcher are the perfect couple. We all watched them on That ‘70s Show when their characters, Jackie and Kelso, dated and when we found out that they were dating in 2013, we just couldn’t get enough. These two give us some serious relationship goals, which is why we have their 12 sweetest quotes for you!

When she was 14 starring on That ‘70s Show, she had a big crush on Kutcher, who played her on-screen boyfriend Kelso on the show. “I was like, ‘Oh, he’s so cute, it’s the Calvin Klein model!’ Then I was like, ‘I have to kiss him?’ I was so nervous and uncomfortable. I had the biggest crush on him,” she told People back in 2001.

11. On Seeing Him Shortly after His Split from Demi Moore

Shortly after the actor split from Demi Moore, the Bad Moms star saw him at an event – and she suddenly found him really attractive.  “I see this guy, and I see his back, and he’s really tall, and I’m like, ‘Who’s that tall guy?’” she told Howard Stern. “And I’m wearing this big poofy dress, and I look ridiculous … and then he just turns around and it was like, literally, if we were in a movie, the music would start playing and violins would go.” She continued, “I think that he, for the first time ever, just took my breath away.”

Thanks to their roles on That ‘70s Show, Mila and Ashton shared an insane amount of history. They did things that normal couples do together on the show, and Mila is very grateful for that. “My first real kiss ever was with him on the show,” she told W Magazine. “And when (‘That ’70s Show’) had a prom, my date for the prom turned out to be my fiancé. We can honestly say that we went to prom together.” She added, “Not only did (the show) introduce me to my fiancé, but I’m so grateful that all my mistakes are recorded for posterity … I went through everything embarrassing that a girl can go through in front of my fiancé. There’s no question that he’s seen the worst. I find that comforting.”

9. They Never Planned to Get Married

8. The Proposal Is the Best Day of Her Life

According to Kunis, the day that Kutcher proposed to her was by far the best day of her life and her relationship with him is different from all of her previous ones – in a good way. “The best day of my life so far was the proposal. I cried. I was a mess. Not to discredit any relationships in my past, but this relationship is different,” she told Marie Claire.

7. She Wasn’t the Marrying Kind – Before Ashton

Before the Black Swan actress started dating Ashton, she never had any intention of ever getting married, but dating him changed that for her. “I never wanted to get married. From the age of 12, I prepared my parents for no marriage. Then things changed – I found the love of my life. Now my theory on weddings is: Don’t invite anyone. Do it privately and secretly. My parents are okay with that. They’re just excited that I said yes,” she told W Magazine. As if that wasn’t sweet enough, she revealed that he was her big movie star crush! “We all get movie star crushes. I’m marrying mine.”

6. He Thinks Mila Is the Greatest Mom

The former Two and a Half Men star thinks the world of his wife and, according to him, the best thing about having their daughter Wyatt was Mila. “The most amazing thing about having a baby is my partner, Mila,” he told Ellen DeGeneres. “She’s the greatest mom… I can’t even. I go to work every day and I come home and she’s like perfect. And it just seems like everything went amazing. And I know that something probably didn’t go amazing, but she never tells… it’s unbelievable. She’s incredible.”

5. She Thinks He’s a Great Dad

The Friends with Benefits star thinks her husband is a great dad. When Wyatt was born, he was determined to bond with her by changing all of her diapers. “My husband is an incredibly hands-on dad. When my child was born, I was breastfeeding, and he said, ‘That’s your connection. I want to change every diaper.’ When we’re in public, if it’s a pee-pee diaper, you can change her at the table, but if it’s a poo-poo diaper, you don’t want to affect the people eating. So he’s like, ‘Err, I guess I’m going to the ladies’ room to do it,’” she told The Telegraph.

4. They Are Still in the Honeymoon Phase

The former co-stars are still in the honeymoon phase of their relationship, so they don’t ever get annoyed with each other. “I can give you an honest answer, and this is going to be the opposite of what you will want to hear, but my husband does not annoy me,” Kunis told E! News. “He doesn’t. He really doesn’t. I don’t know if this happens later, we’ve only been married a handful of years, you know, it’s very much in the honeymoon phase. We still really love and like each other daily.”

3. He makes Her Laugh Every Day

The Forgetting Sarah Marshall actress has said that the actor makes her laugh every day. “I will say he makes me laugh every day. Sixty years from now, when we’re in our rocking chairs and I’m wearing a muu-muu, I hope he’s still around and I’m still giggling, because the greatest gift you can give is making each other laugh,” she told The Daily Telegraph.

Mila plans to one day sit her kids and show them That ‘70s Show so that they can see how their parents met. She told The Telegraph, “Mommy and daddy worked together for eight years. This is how they met each other. Let’s look at it, honey. We were even each other’s prom dates on the show.”

According to Kunis, she can’t lie to Kutcher. “We can’t bullsh-t each other. I literally can’t lie to him. He can call me out on everything, and I can do the same, because there’s nothing about the other person’s face that we don’t know. We know when they’re acting, thus we know when they’re lying. Sometimes he’ll look at me, be like, ‘Really?’ And I’m like, ‘F—k,’” she told Glamour.