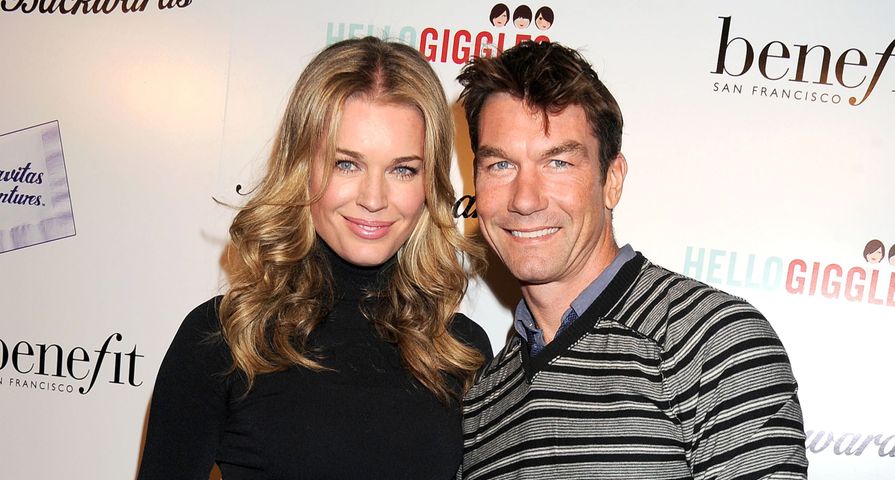 Jerry O’Connell and Rebecca Romijn have been together for over a decade now and, although their relationship reportedly began when he was still dating Giuliana Rancic, these two seem like they were made for each other. Since the beginning of their relationship, they have been totally smitten with each other and, even though they might not get as much press as other couples, these two probably have one of the strongest relationships in Hollywood. Because they are such a great couple, check out these 9 things you didn’t know about their relationship:

Jerry and Rebecca first met at a Maxim Hot 100 party in Las Vegas back in 2004 while she was still married to John Stamos and Jerry was dating Guiliana Rancic. According to Jerry, they had an immediate connection. “I met my wife and her ex John Stamos at a party when they were married. I remember thinking, ‘Wow. This girl is really beautiful and funny.’ I talked to her the whole party. My wife remembers that party and remembers us clicking. We clicked. My wife and I clicked. We clicked the first time we met,” he said on The Jess Cagle Interview.

The pair, according to O’Connell, reconnected at another Maxim party when she was separated from John Stamos, which is when they had their first date. “I hung out with her pretty much all day and her friend. We went out to dinner that night, a group of us. It wasn’t any kind of date. Then her friend, a guy said to me, ‘Take her phone number. I think she wants to call you.’ I was working it. I got her phone number, and I called her, and then we met up after that Vegas trip back in Los Angeles. We went out,” O’Connell said during The Jess Cagle Interview. “My wife was right. We had a sleepover, and I never left. It was great.”

The model-turned-actress and the actor started dating in 2004 while she was still married to John Stamos and became engaged in September 2005. O’Connell popped the question when they were in New York. “We couldn’t be happier and are looking forward to the next chapter of our lives,” the couple said in a joint statement.

The gorgeous couple tied the knot in a secret ceremony on July 14, 2007 at their home in Calabasas, California. They had invited a small group of family and friends over to their place for a barbeque and then surprised everyone with their wedding. Romijn wore a Ralph Lauren gown with jewelry by Neil Lane and the couple’s dogs, Taco and Better, who also participated in the ceremony, wore black bows. “Having the wedding at home makes it personal,” O’Connell said. “It becomes more about you as a couple.”

In April 2008, tabloids began running stories that O’Connell and Romijn were trying to get pregnant and then in July of that same year the couple’s spokesperson announced that they were expecting twins. They had been using the fertility drug Clomid, but only got pregnant several months after they had stopped using it. On December 28, 2009, they welcomed twin girls, Dolly Rebecca-Rose and Charlie Tamara-Tulip. Their daughter Dolly was named after the country singer Dolly Parton and Charlie was named after O’Connell’s brother.

After giving birth, Rebecca went to work on the movie The Love Child of Andy Warhol and Yoko Ono and Jerry took a hiatus from his career to stay home with their daughters. “I watch the kids while she’s at work. It’s good – they like coming to another place! She had a kissing scene today, and it must have been weird for the other actor to know that she has kids and a husband nearby!”

The couple does not employ a full-time nanny. “We’re each other’s assistants. We pick up each other’s slack. Whoever is less busy helps the busier one: ‘Can you go pick up this for me?’ or ‘Can you book my flight?’” Romijn told Redbook. “That’s what real life is. Once you start paying somebody else to do the grunt work, who are you?”

They have a pretty full house! In addition to their twin daughters, they also have three dogs and two cats and all of the pets sleep in their bed with them! “I’m pretty low on the food chain as a lot of the cats and dogs sleep on our bed and I get the least amount of room to all of them. The cats get the most, my wife gets the second most, the dogs get the third and fourth most and I get the fifth most. I’m definitely lowest on the chain!” O’Connell told People.