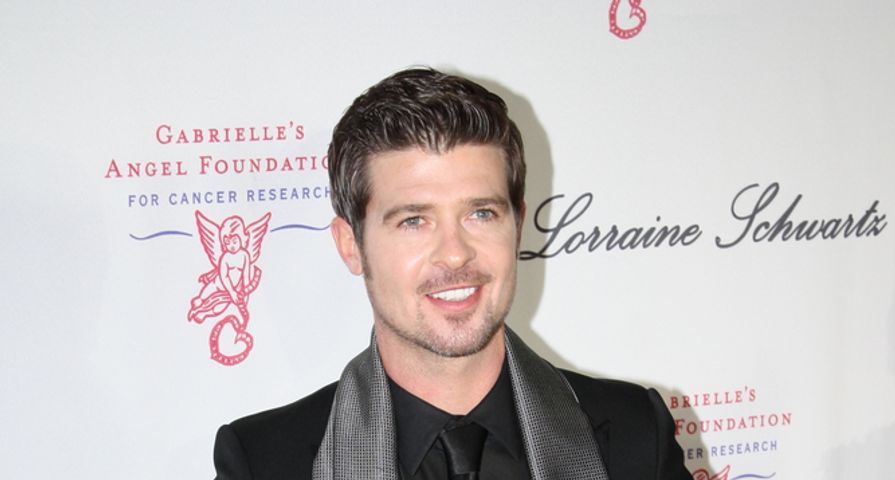 Before his hit single “Blurred Lines” climbed to the top of the charts, Robin Thicke wasn’t especially well known. Over the past year, however, everything he does seems to spark headlines. From his raunchy 2013 VMA performance with Miley Cyrus to his controversial video for “Blurred Lines,” controversy follows Robin everywhere . Here are 9 big scandals involving Robin Thicke!

Robin Thicke’s hit song “Blurred Lines” came under fire last summer when critics contended that the song contains rape overtones and degrades women. The video features T.I., Pharrell Williams and Thicke – who are all fully clothed – with three three scantily clad models in various stages of undress dancing around them. According to the Canadian singer, the song is intended to celebrate his 20-year relationship with Paula Patton.

When the family of deceased singer Marvin Gaye alleged that Robin Thicke’s single “Blurred Lines” had the same feel and sound as Gaye’s song “Got to Give It Up,” Thicke, along with Pharrell Williams and T.I., filed a pre-emptive lawsuit asking a federal judge to declare that their song was not a copyright infringement on Gaye’s work. The Gaye family countersued; however, they were accused of making an invalid copyright claim since only expressions, not individualistic ideas, can be protected.

Robin Thicke and Paula Patton’s relationship was allegedly rocky before his raunchy performance with the “Hannah Montana” star at the 2013 VMAs, although no one has specified why. When the “Precious” actress saw how sexual the performance was, she was supposedly quite upset; however, Thicke reportedly begged her to defend him and the controversial performance, so she agreed to put on a united front during award season, which would explain the timing of the separation announcement.

6. Getting Grabby with a Blonde at a VMA After-Party

At a 2013 VMAs after-party, Robin Thicke was caught on camera grabbing socialite Lana Scolaro’s butt. According to the British jet setter, the “Blurred Lines” singer spent the night groping her in front of his wife, going so far as making out with her on a couch with Patton nearby. Thicke never denied cheating on his wife; however, he did address the rumors. “My only comment about the so-called scandalous photo would be that my wife and I are perfectly in love and very happily married. So, no complaints there.”

Paula Patton once revealed that she hid in the bushes outside Robin Thicke’s house to catch him when she suspected that he was cheating in 2005. “We weren’t married yet. We were boyfriend and girlfriend and I heard something on the phone and I was like, ‘Hmph, I don’t trust it.’ So I went down to his house and I was crawling through the bushes trying to look through the window…Totally got caught, he was with his boys playing poker. He was like, ‘Hey babe, wanna come in? Look around, no, make yourself at home!’ I was mortified. I’m also happy I was wrong, I’m not gonna lie. But he was like, ‘You’re a little crazy,’” Paula Patton said.

4. Hot Night in a Parisian Club

Robin Thicke further fuelled rumors that he and Paula Patton had an open marriage when he was performing at Club 79 in Paris. After finishing his show, he was spotted on the dance floor getting touchy-feely with a curly haired fan. The “Blurred Lines” singer was caught on camera enjoying a sexy dance with her and they were also spotted embracing each other. It wasn’t too long after this that Patton pulled the plug on their marriage.

Robin Thicke and his wife Paula Patton allegedly kept things spicy in the bedroom with a consensual three-way relationship with a massage therapist who goes by the name of “Jasmine.” The arrangement – which is said to have been going on since 2012 – reportedly fell apart last summer when the “Blurred Lines” singer was caught carrying on a separate affair with Jasmine behind Patton’s back. Thicke’s reps have denied the assertions about Jasmine, but his marriage to his actress wife always seemed pretty open.

While Robin Thicke’s supposed infidelities have been all over the news for several months now, after Paula Patton announced her separation from her husband of eight years, rumors began to fly that she was involved with her co-star from “Déjà Vu” and “2 Guns,” Denzel Washington. The Oscar-winning actor has been married for more than thirty years; however, sources say that he began messing around with Patton in 2006 when they were filming “2 Guns.”

After his wife announced that they had split, Robin Thicke publically tried to woo her back and, for a while, it looked like Paula Patton was ready to give him another chance; however, in May 2014, the “Blurred Lines” singer made headlines for allegedly inviting 10 women back to his home after a night out. Sources say that Thicke declared it a “no pants party” and then stripped down to his boxer briefs, encouraging the women to follow suit. While most of them women left, half stayed and reportedly some of them hooked up with him.