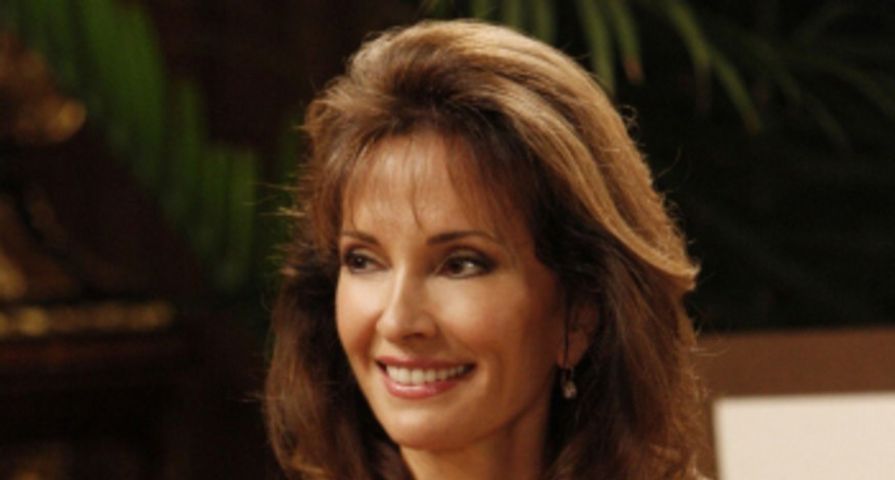 Everything from the 1980s seems so dramatic, especially when it comes to soap operas! There were over-the-top storylines, crazy romances, and then there’s the big hair from female soap stars! There were also some great times in daytime drama back then and a lot of it had to do with the incredible (and unforgettable) female soap opera stars of the ‘80s. Below is a list of eight unforgettable female characters from 1980s soap operas.

Dr. Marlena Evans has evolved into a secondary character on the soap today, making way for younger Salemites to spread their wings and fly within storylines for the soap opera. She strolled into town in 1976, and spent nine years on the show during her first stint. It was in the 1980s that Evans shared an incredible romance with Roman Brady and built a solid foundation in the town she has grown to call home. Interestingly enough, the actress who plays Evans, Deidre Hall, decided to pursue primetime opportunities in 1987 and left the Days of Our Lives (DOOL) before the decade wound to a close. She would come back in 1991 and Days would experience a 10 percent increase in the ratings. It was clear, the fans missed their ‘Doc.’

While there were many actresses who had played Rachel Cory during the show’s tenure, Another World (AW) fans will always remember Victoria Wyndham’s portrayal of the character. She entered the role in 1972 and Rachel dominated storylines all the way up until 1999 when the soap was cancelled. As the matriarch of the Cory family, she will forever be remembered for her love affairs with both Mac Cory and Carl Hutchins.

Leanna popped onto the Genoa City scene later in the ‘80s, but still had some pretty outrageous storylines. She did it all on The Young and the Restless (Y&R) during her tenure with the show: gossip reporter, book author, advice columnist, and talk show host. Randolf even married the infamous Victor Newman at one point in time. While she did have an interesting Y&R stint, she was a tad mentally unstable. After all, stalking Ashley Abbott was what brought her into town in the first place.

Who could forget the incredible love story that Robert Scorpio and Holly Sutton had on General Hospital (GH) in the 1980s? Holly entered GH storylines in 1982 and originally had a fling with Robert’s BFF, Luke Spencer. Beautiful, smart, with a whole lot of passion, GH fans fell in love with Holly instantly and many miss her appearance on the show to this day. Despite that she fell for men who had a streak of justice to them, interestingly enough Holly strolled into Port Charles as a con artist.

Calliope entered the land of Salem in the mid-80s and was one of those outrageous soap opera characters that fans simply cannot forget. She did it all: from wedding planner to talk show host to fashion designer and more. Calliope had a huge personality with an even bigger fashion sense, and easily could’ve been a model for a Betsey Johnson runaway show at a drop of a hat, thanks to her over-the-top outfits. What was even more unforgettable than Calliope was the eccentric, yet loving, romance she shared with fellow Salemite, Eugene Bradford.

Felicia strolled into GH looking for a family heirloom and also looking like a boy! Alas, once that hat came off, a stunning woman would be behind it and it wasn’t long before she caught the eye of Frisco Jones. The two would become a super couple in the 1980s, going on spy adventures and eventually building a family together. Felicia can still be seen in Port Charles today, but nothing beats some of the 1980’s storylines she was involved in.

The evolution of Christine Blair has been incredible over the years and has made her a sustainable character on the Y&R. She entered the Genoa City scene as a model and along with Phillip Chancellor and Nina Webber, she was part of the show’s teen scene in the early 1980s. Alas, Christine would eventually drop her modelling gig and pursue a career as a lawyer, a far cry from her days in the 1980s when she was known as cute little Cricket Blair.

Who else misses All My Children (AMC)? One cannot simply think of the iconic soap opera without having Erica Kane pop into their heads. She entered the show in the 1970s, but dominated daytime drama in the ’80s, and it is fair to say that Erica just may be one of the most popular female characters in soap opera history. Whether you loved her or hated her, or loved to hate her, Erica kept things interesting in Pine Valley and she (along with Susan Lucci) is quite missed by daytime drama fans everywhere.