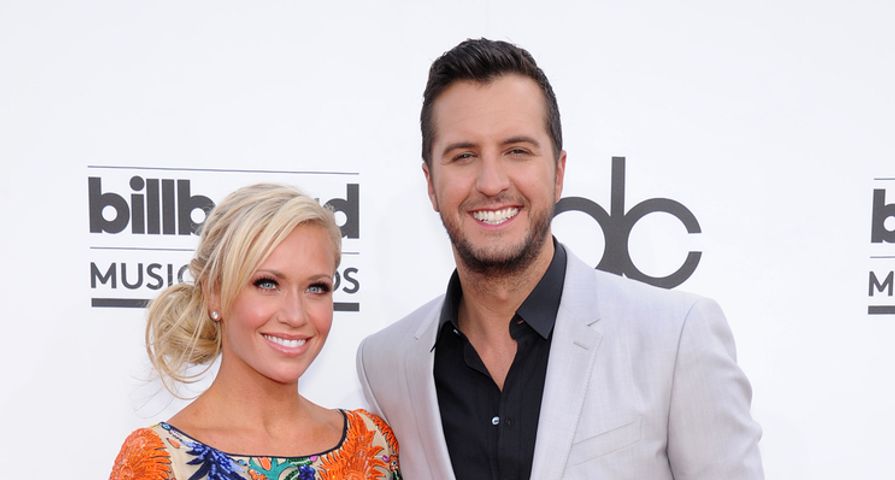 Luke Bryan and Caroline Boyer are one of the hottest couples in country music! These adorable college sweethearts got married over a decade ago on December 8, 2006 which means 11 years of wedded bliss! Despite being constantly on tour and in the limelight, Luke and Caroline have managed to juggle it all while raising a big family with two kids and an adopted nephew. Aside from Luke’s celebrity status and international fame, they live a relatively normal life out of the public eye. To top it all off, not only are they still married after 10 years, they also have one of the cutest relationships! Here’s a list of 8 things you didn’t know about Luke Bryan and Caroline Boyer’s relationship:

Luke and Caroline are college sweethearts. They met when they were both students at Georgia Southern University in Statesboro, GA. They were at a local bar called Dingus Magee’s in the fall of 1998 when he was a senior and she was a freshman. In an interview with Good Housekeeping, Bryan said he knew the second he saw her that he wanted to be with her. “It was love at first sight with Caroline — those blue eyes of hers. I knew that, no matter what, I was going to make my way over to her.” In a separate interview with The Boot, he said he had to knock back a few drinks before he could work up the courage to talk to her. “I had to drink a lot before I could talk to her, but I did. Somehow I managed to ease over there and somewhat be charming. It was one of those situations for me, it was like, ‘Who is that, and how do I go talk to her? And, yep, I’m going to marry that girl,'” he said.

7. She Made the First Move

You’d think someone like Luke Bryan who gets up on stage in front of a bunch of screaming fans would have the courage to ask a girl out — but he didn’t! Luke was so smitten with Caroline and stuck in his southern gentleman ways, she was the one who had to make the first move on him. He was confident that she was the one for him, he just didn’t have the confidence or moves to pick her up. In an interview with People magazine, Caroline said: “He was always a gentleman. We hung out as friends first and he never made a move on me. I kissed him first! He was always so scared of making a girl feel uncomfortable, he wouldn’t cross a line,” she said. At least this proves chivalry isn’t dead! 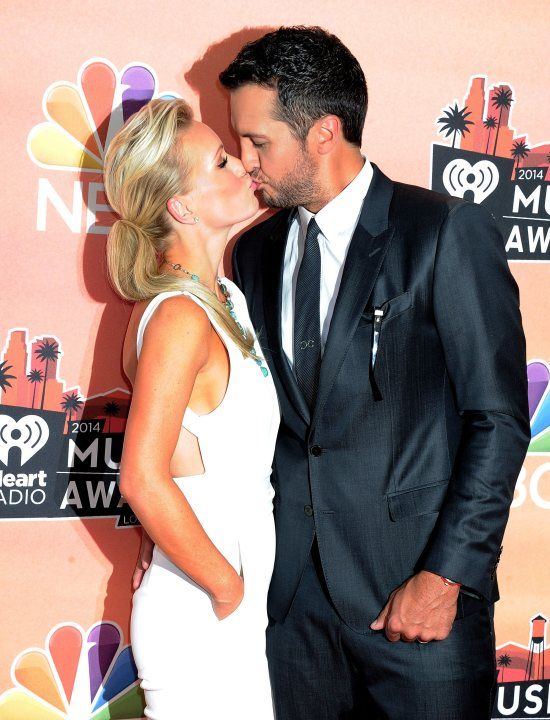 Since Luke Bryan was older than Caroline and they were so young when they met, their relationship didn’t last long before they eventually parted ways. “She was three years younger than me in college. I was about done with school when we met. So I kinda went off and did my thing in Nashville and she finished up her college experience and it kinda allowed us to both go get our feet a little firmer on the ground,” he said. They were broken up for about five and a half years before they got back together again. In an interview with Huffington Post, Bryan told the story of how they reconnected: “I was playing a little bar in Statesboro and she just happened to kinda be in town. We kinda saw each other and talked a little bit and then started emailing back and forth a little bit. And she was like, ‘Hey, you want to come to my family’s Christmas party?’ I went to the party and the rest is history.” 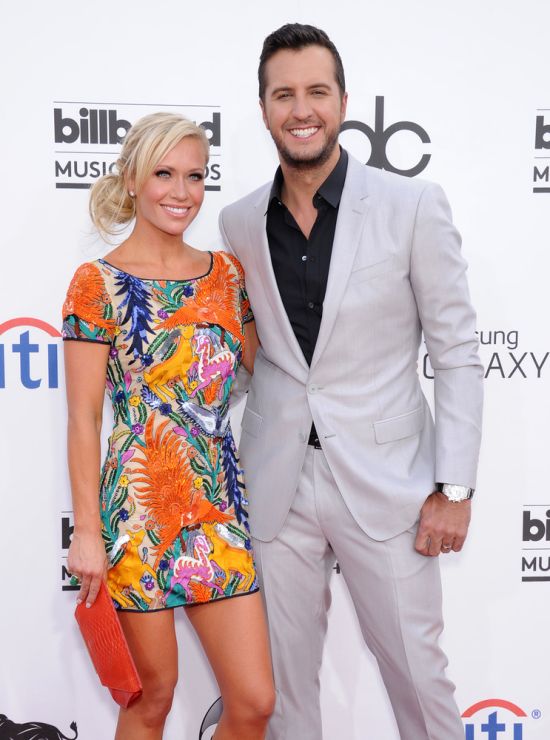 Arguably one of the cutest things about Luke and Caroline is that they have matching tattoos! Luke Bryan’s butt gets a lot of attention on its own, especially when he’s shaking it up on stage, but what many fans might not know that is where he has his wife’s initials “CB” tattooed! She has his first initial tattooed on a not so risky place — her ring finger. They went and got the tattoos on Valentine’s Day. Luke’s little secret of where his tattoo is was revealed when Jason Aldean accidentally let it slip during an interview. “He was on tour with me when he got it. He was complaining about it [itching], and I was like, ‘What is wrong with you?'” He then said that Bryan showed him his rear end and revealed the hidden tattoo!

4. In Tune with Each Other

During an interview with Entertainment Tonight, Bryan said one of the reasons he and Caroline have managed to stay together for so long is because they are totally in tune with one another. These two apparently have some great communication! “We both have our things that we love to do. We can tell when we need a night off or [to] grab a hotel room somewhere, go on a fun date night or something. We stay pretty in-tune with all that and try to make sure we’re always on the same page,” he said. He also said that each morning they have a coffee together, just the two of them. “It’s my favorite time of the day; anytime we can have 30 minutes to talk, it’s just great.” 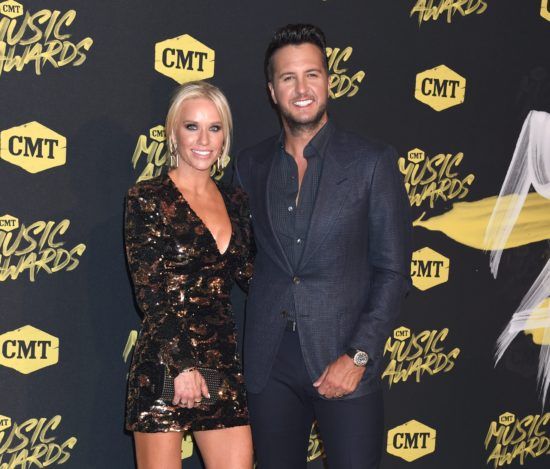 Luke Bryan hasn’t written many love songs in his long career, but his most recent and touching song was inspired by his wife, Caroline. “This was my attempt at, through song, telling her how much she means to me. I never kinda landed on a wedding song, and this thing may be that.” The song is called “To the Moon and Back” which is something they always say to one another when the other person is leaving or when they are saying their ‘I love yous’ and, in an interview with Entertainment Tonight, Bryan said he was totally nervous the first time he played the country ballad for her. “I played it for my wife and I had butterflies, her hearing it for the first time. It was my attempt through song telling her how much she means to me.” The song was recorded for his Kill the Lights album.

Luke Bryan’s family has suffered through a great deal of tragedy. His brother, Chris died in a car accident when Luke was only 19-years-old and in 2007 when his career was just starting to take off, his sister Kelly also died unexpectedly. Then in 2014 her husband, Luke’s brother-in-law Ben Lee Cheshire died from a possible heart attack leaving their three teenage children orphaned. Luke and Caroline adopted their youngest child, Luke’s nephew Tilden, 14. In addition to Tilden, Bryan and Boyer have their own two sons together, Thomas Boyer Bryan, 8, and Tatum Christopher Bryan who is 6-years-old.

1. They Support Each Other

Luke has said that Caroline is his biggest cheerleader because she sacrifices so much of her time to make sure he has the career that he wants and can get up on stage each and every night. He refers to her as the “perfect wife.” In an interview with Rolling Stone Luke talked about how he juggled life on the road with such a large family. “Every day when I’m home, me and Caroline get in bed around 10 p.m. and it looks like we have done a triathlon. It truly is…And Caroline is in the midst of it every day and, she’s jockeying, and her sister helps and our nanny. It’s kind of a village. But it challenges every day and you learn and learn. You try to get through it every day.” 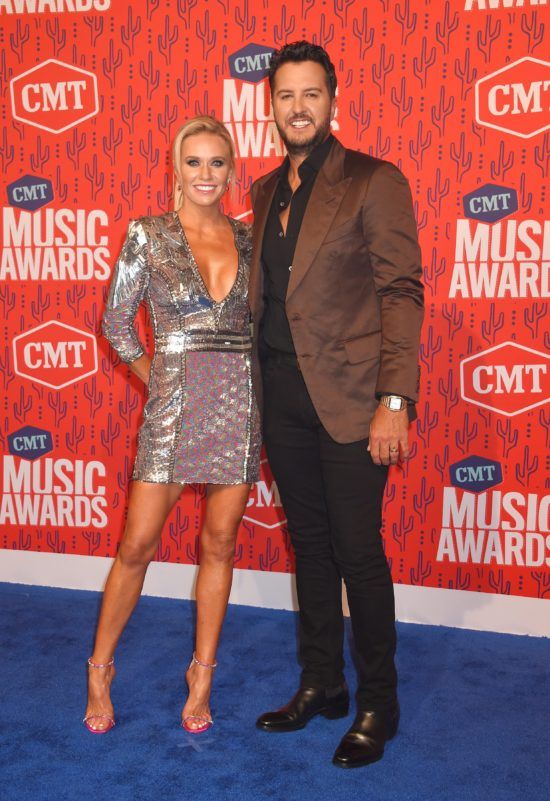