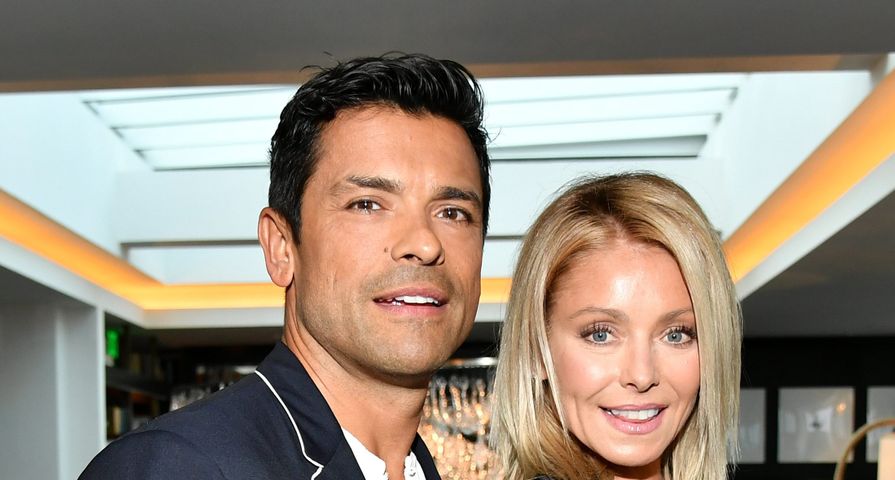 Kelly Ripa and Mark Consuelos have become an iconic couple in Hollywood. These two have one of the most adorable and well-respected marriages in showbiz and now that they are celebrating their 25th wedding anniversary, it’s clear they are more in love than ever! Kelly and Mark are one of the most beloved celebrity couples. We love them because they are not afraid to show a little PDA while strolling through New York City or partake in a friendly, flirtatious banter while co-hosting Live. It’s safe to say we all envy their seemingly perfect relationship. In honor of their 25th wedding anniversary, here’s a look at 10 things you probably didn’t know about this sweet couple!

At one point in their careers, both Mark and Kelly were soap stars! The two met while acting on the popular soap series, All My Children, back in the ’90s. Kelly was in the role of Hayley Vaughn while Mark was cast as her love interest, Mateo Santos, in 1995. They dated in secret for about a year before going public with the relationship. According to Kelly, it was love at first sight! “When I met Mark, I was just sort of thunderstruck. The next day I went up to him and, although I didn’t even know his name, I said, ‘I had a dream about you last night. We were married and had a little girl and were on a plane to Rome.'” It took Mark a while to make a move on Kelly because he said she played hard to get after that and he didn’t think he had a chance with the blonde beauty! “I thought she was adorable, hot and sexy and all that stuff. But I was very focused — I didn’t really think I had a chance with her, so I wasn’t really focused on that. We became friends really quickly after that,” he said.

After Mark and Kelly met in 1995 they dated for about a year in secret. They went public with their relationship when they eloped in Las Vegas on May 1, 1996. Kelly has talked about how she sometimes receives scrutiny over eloping instead of having a big lavish ceremony, but she brushes it off because unlike most people in Hollywood, her marriage has not only lasted, but thrived for the past 25 years! “People assume that when you get married in Vegas, you go in willy-nilly. We wanted to get married and start our lives together, and we didn’t take it any less seriously than anybody who has a huge wedding, It’s the marriage that’s important, not the wedding,” she said. When asked about their decision to elope Mark said, “It just happened. The next thing you know, we’re married, and then four months later we were pregnant.” The newlyweds welcomed their first child, Michael, in June 1997.

Courtesy Live with Kelly and Michael

Ripa and Consuelos share three children together, Michael Joseph, Lola Grace, and Joaquin Antonio. Early on in their marriage and children’s lives, the couple decided they wanted to have strong family values and be extremely “present” in their children’s lives. This is a hard feat to accomplish for celebrities or people working in the entertainment industry, but they are adamant they make it work. In an interview with ABC News, Ripa said, “My husband had dinner as a family every night growing up and he was like, ‘We are having family dinner every night, no matter what, and we do that. It means so much to the kids, it means so much to me. Does it always go as planned? Of course not.”

Fans of Live with Kelly are quite familiar with Kelly’s husband, Mark Consuelos. He is no stranger to the stage! He had made guest appearances on the show, is frequently talked about by Kelly and even sat as her co-host on numerous occasions. When Regis Philbin left the show and more recently Michael Strahan, Mark’s name was thrown into the hat of potential candidates to fill their shoes. Unfortunately, Kelly said in the past that Mark will never step in as a permanent host on the show. In an interview back in 2012, Kelly Ripa revealed that Mark was the one who drew the line in the sand about working together. “No one would make me happier than Mark, but he values our marriage and he says that he doesn’t see how we could stay married and both do that show.”

Even though Mark and Kelly no longer work together full time, they are still in business together. The couple started their own production company, Milojo, in 2007. The name of the company was derived from the names of their three children, Michael, Lola and Joaquin. Milojo has been quite successful right from the get-go. Their first project was an Emmy-nominated feature documentary called The Streak. It premiered at the Tribeca Film Festival in 2008 and since then they’ve launched a development deal with Discovery Channel and TLC and several in-studio election specials on LOGO. The production company has produced several projects of critical acclaim and worked with big stars like Wanda Sykes and Will Ferrell. Just recently, Kelly and Mark announced they will be creating a new reality television show called Fire Island. The show will be “a docuseries following a group of young, New York City professionals and their adventures and relationships of friends and lovers.”

When Kelly appeared on Watch What Happens Live with Andy Cohen in 2015, she answered the burning question about how she keeps the romance alive in her marriage to Mark. “There’s no secret! We just like each other a lot. I really — I love my husband! I think he’s awesome. We’ve been together a long time and we try to do spicy things together all the time.” Sounds like Kelly and Mark still cannot keep their hands off one another! After further prodding, she added, “I fundamentally believe that the more you do it, the more you do it and the less you do it the less you do it.”

Dealing with a long distance relationship is nothing new for two actors in Hollywood, and the same goes for Mark and Kelly. As Mark is off working on various acting projects, these two often have to cope with living apart for long periods of time, but year after year they make it work. When asked about how she deals with the distance, Kelly said they just do because that’s what their life is. “We’re actors. We’ve done it for years. It’s not hard. It’s actually something we’re quite good at,” she said. When Mark dished on what it’s like being away from the family he said, “It’s easy. The kids are older now, no more changing diapers, there’s no midnight feeding, so it’s easy. In the past, maybe I wouldn’t take a job so far away, but it’s good. It’s really, really good.” Just this past summer Mark has been living in Los Angeles while Kelly holds down the fort in New York City. Mark took his two eldest children to L.A. for the summer to live with him, while Ripa is in NYC filming for Live with their youngest son, Joaquin.

Another way they keep this marriage alive and well is with a date night once a week. “We carve out time for ourselves. I think that we’re better parents because date night gives us something to look forward to, a night where we’re not saying, ‘Put that down, stop touching her, don’t spill that.’ Sometimes we’ll put the kids to bed early and watch Jersey Shore on DVR. It can be that simple, just the two of us, alone, one day a week, for dinner and hijinks…a little bump and tickle. Woo-hoo! I’m 40. I can say that now,” she said.