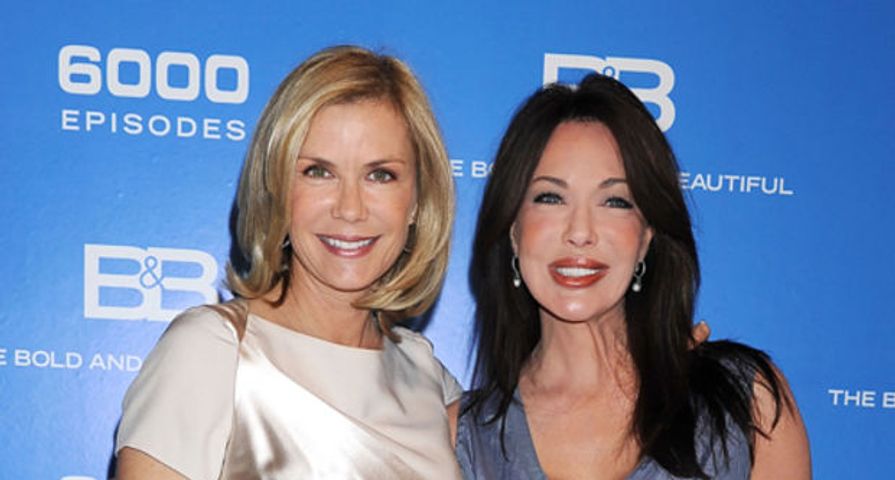 The land of soaps has created some pretty intense rivalries over the years. The Young and the Restless’ (Y&R) Victor Newman and Jack Abbott is one that still continues today. Then there was the DiMera and Brady family feud over on Days of Our Lives (DOOL) that rocked Salem since the early ‘80s. Who could forget the legendary cat fights between Bobbie Spencer and Lucy Coe on General Hospital (GH)? Alas, all these onscreen rivalries have been a great watch for fans … but what about those fights that have occurred off the daytime drama sets? Below are the seven biggest soap opera feuds that have taken place off-screen.

Victor and Jack have shared some pretty incredible on-screen fights over the years, but apparently the best one to date was one that took place while the cameras weren’t rolling. While Braeden stepped into his role in 1980 and Bergman started at the Y&R in 1989, the two reportedly did not get along so well in the early days. So much, that an incident in 1991 apparently ended with some punches exchanged. Y&R creator William Bell threatened that if any situation would escalate to this degree again, the two would be canned on the spot and dear old Victor and Jack would instantly be recast. Seems like it worked because the two have been able to maintain a professional relationship since.

Speaking of the Moustache, it seems that Bergman isn’t the only actor that Eric had issues with on the Y&R set. It has been reported that he also did not get along with onscreen son Adam Newman, played by actor Michael Muhney. So much so, it has been rumored that the reason Muhney was fired in 2013 was because of his issues with Braeden. There has been a tremendous amount of speculation about what happened, especially since Muhney departed the show three years ago, following allegations of sexual assault, so, it’s hard to decipher fact from rumor.

In a November 2010 interview, Y&R’s Eileen Davidson was asked about her thoughts when it came to former colleague Victoria Rowell’s claims around racism on the show. Eileen cleared up some of the accusations that Victoria had made regarding the Y&R’s behind the scenes environment. Fast-forward about five years and the two actresses had a little spat on Twitter. Davidson tweeted about the terrible shootings in Charleston, South Carolina, and Rowell responded to one of Eileen’s followers and then questioned her former Y&R co-star by saying, “did you fight against racism on the Y&R.” Rowell also posted a tweet saying that a follower shouldn’t be “distracted by willfully blind shameless rating seekers.” Next thing Eileen knew, she was blocked by Rowell on Twitter. Davidson did post a tweet telling fans this and seemed confused since, according to Davidson, the two never had an issue in the past. Rowell would then send out an ominous tweet later on stating that she had blocked “the interloper.”

It has been reported in the past that these two ladies shared a tremendous amount of tension while on the set of All My Children (AMC). In fact, it seemed to start from the moment Gellar stepped into Pine Valley in 1993. Reasons around their off-screen feud? Well, it’s been reported that Lucci fell victim to the jealousy bug when it came to Gellar’s quick rise in soap opera fame and Gellar’s mom seemed to get involved with the show a little too much. Mix that all in with the Daytime Emmy that Gellar won in 1995 (Lucci had been nominated 15 times at that point with no award) and it makes it no wonder why there was bad blood between the two. Alas, Gellar only lasted two years on the soap and would move on to primetime success and a movie career as well. As for Lucci, she finally snagged that Daytime Emmy in 1999. All’s well that ends well!

These two Bold and the Beautiful (B&B) actresses were quite chummy at one point in time. When Kimberlin’s Sheila Charter character moved to the B&B from the Y&R, the duo had some interesting storylines together. When did it all fall apart? It has been reported that things got sticky between the actresses around the same time Hunter’s marriage fell by the wayside. During the divorce hearings, Kimberlin and hubby were asked to act as character witnesses and they ended up siding with Tylo’s ex. Things got ugly between the two after that.

Drucilla Winters and Phyllis Summers never had a soft and cuddle BFF relationship when living in Genoa City, and apparently the same rings true in real life for actresses Victoria Rowell and Michelle Stafford. It’s been reported that Rowell did a few interviews after she left the show in 2007, claiming that during one argument scene between the two characters, Stafford took it to an entirely different level and actually spat on Rowell while rehearsing. Stafford has never publicly responded to the spittle allegation, but the good news is, both women have left the show, so there are no worries of any spit or spat between them in the near future.

The B&B’s Dr. Taylor Hayes and Brook Logan have had quite the rivalry over the years when it came to fighting over the handsome Ridge Forrester. Alas it seems that Hunter Tylo and Katherine Kelly Lang may have had a feud between them as well! Shortly after the original Ridge, Ronn Moss, left the show in 2012, the two ladies engaged in a not-so-pleasant war of words on Twitter. A fan posted something for Lang, stating that Tylo had supposedly failed to stop her fans when it came to rumors and gossip about the beautiful blonde B&B star. Lang responded by calling Tylo out, saying “why don’t you talk to me?” Hunter tweeted, denying the allegations around the fan’s post and told her former B&B co-star to refrain from getting “caught up in the chaos.” Twitter can be such a dangerous place for enemies or frenemies!