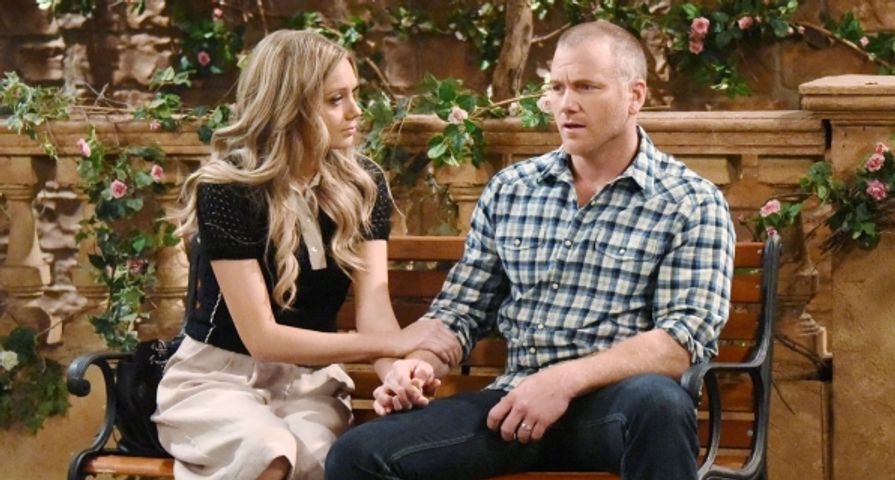 What would the land of soap operas be without a few crazy plot twists and unrealistic storylines now and again? While there are times where fans can do a double take during a story or perhaps roll their eyes, in many ways, when a crazy storyline works well, it is something that the audience can smirk at and wonder about. When it comes to this year, there was no lack of insane plots in the daytime drama shows that we love, and below is an outline of the top 9 craziest storylines in 2016.

What is it about this family? Every time you think one of them may be gone for good, they come back and others just keep popping up. GH fans were given a hint of Valentin way back in 2009 when Helena claimed he was the illegitimate son of Mikkos (man, that guy was busy in his younger years with all the kids he has produced over the years). Alas, seven years ago, it was established that Valentin was dead. Fast forward to 2016 and Valentin is very much alive and on Cassadine Island. Posing as Theo Hart, it wasn’t long before he exposed himself as the lost prodigal Cassadine son. The havoc Valentin has wreaked since his return is almost as crazy as him coming back! He’s killed Nikolas, tried to steal Spencer, and it turns out he had a baby with Lulu Spencer. Will the Cassadine insanity ever end?

8. Marlena’s Doppelganger – Days of Our Lives

Hattie Adams returned to Days this year and became somewhat of a friend to Hope in prison. It seems for one reason or another, Days‘ writers are obsessed when it comes to twins and look-likes, especially as it relates to Marlena Evans. Longtime fans of the soap may recall that Hattie first arrived in Salem in 2000 — a woman who looked like Marlena, but was her complete opposite. While Deidra Hall currently plays Hattie, back then she was played by her real-life twin sister Andrea, who incidentally played Marlena’s twin, Amanda, years ago as well. The idea that Marlena had a look alike was crazy 16 years ago, and Hattie’s return this year was no different.

No matter how much time goes by, one thing is for sure: Victor loves Nikki, and Nikki loves Victor. This was more than evident this year when Victor risked it all to save the love of his life, despite the fact that she had turned on him earlier in the year. The entire situation around his heroic act was completely out there. While his nemesis Ian Ward had Nikki and Phyllis held hostage at the Abbott cabin, Victor was able to escape custody, haul his butt out to the woods, and save the day for both ladies. Did we mention his health wasn’t 100% at the time? Is there anything Victor can’t do? Regardless, Phyllis still despised Victor, but Nikki’s heart was won that day.

It’s crazy enough to think that Ava would want to mess with anyone from the Corinthos family and chance getting caught, but Ava switching Morgan’s medication this past year was a crazy storyline. It was a sensitive one too considering the strides Morgan had made with his mental health. Think of the logistics around finding similar-looking pills that looked like his meds but were not? Would he not have noticed when he looked at the pills? Don’t all prescription pills look very different? Where does one simply find different pills to even make a switch like the one Ava did and how does one make them look believable? This made Morgan’s death later on in the year that much more heartbreaking.

5. Deimos Kiriakis Strolls Into Town – Days of Our Lives

This year, Days‘ fans found out that the manipulative Victor Kiriakis has a brother! Who knew there was another Kiriakis out there ready to wreak havoc in Salem … but there is! After all these years, Deimos appears out of thin air and believe it or not, he is far more vicious than his older brother. What’s even stranger is the fact that Deimos was linked to other Days‘ characters before he came to the little town, including Philip and Chloe – despite the fact that he had been in prison for thirty years before showing up at his older brother’s door.

When Max first arrived in Genoa City, his antics raised some eyebrows. The youngster was obviously going through a hard time with losing his mom and having to deal with the new family dynamics of having a step mom. However, when he orchestrated a trip wire at the Athletic Club during Abby’s baby show, it blew the mind of Y&R audiences everywhere. Not only was it hard to watch a child be so conniving, but the logistics of it all? How the heck did someone else not get hurt in the process? Regardless, it turned out Max was not only having a hard time dealing with his life, he also had a tumor that was causing mental health issues. Thankfully, he was able to get the help he needed.

3. Jill Steals Brass and Sassy – Young and the Restless

You know how it is when it comes to the lives of the rich and richer in Genoa City. Moms and dads purchase their kids brand new cars, horses, homes, trips to exotic places, and high-profile companies now and again. Jill buying Brass and Sassy from under her son Billy’s nose was a bit ridiculous. Then organizing that he and Victoria work together in an effort to reunite them was even more over the top. An overbearing mom, who loves to control the lives of her children, but is also business savvy enough to oversee the running of a small corporation, buys a cosmetic company everyone wanted to bring together her son and ex-daughter-in-law. Makes sense (not really).

More recently, GH fans have been shocked at a crazy storyline that has developed between Franco and Liz Webber’s rapist, Tom Baker. It’s clear that prison may not have reformed Tom, and Franco seemed to sniff this from a mile away. Trying to protect his girlfriend, and essentially all the females in Port Charles, Franco baited Tom, trapped him, and locked him a dog cage? Don’t think things can get any crazier than that … but they do. During Tom’s kidnapping Franco has an epiphany and let’s Baker go. Plot twist number two? It turned out that Tom had gone missing shortly after and then is found dead. Seems like this is a crazy storyline that will continue to roll out in 2017.

1. Hope Kills The Wrong Man – Days of Our Lives

It was crazy enough that Hope killed Stefano early on the year, covered it up, and let Andre take the fall. But as 2016 progressed, a whole whack of craziness ensued. As we all know, Hope killed Stefano to get back at him for what he did to Bo. Turns out that John’s bio-dad, Yo Ling had been pulling the strings the entire time. As 2016 wound to a close and Hope found herself in prison, it turned out that Stefano was quite ill around the time of the shooting and had in fact provoked her to kill him and end his suffering. Crazy, but makes sense. Stefano having the last laugh around his own death seems fitting for this iconic villain.