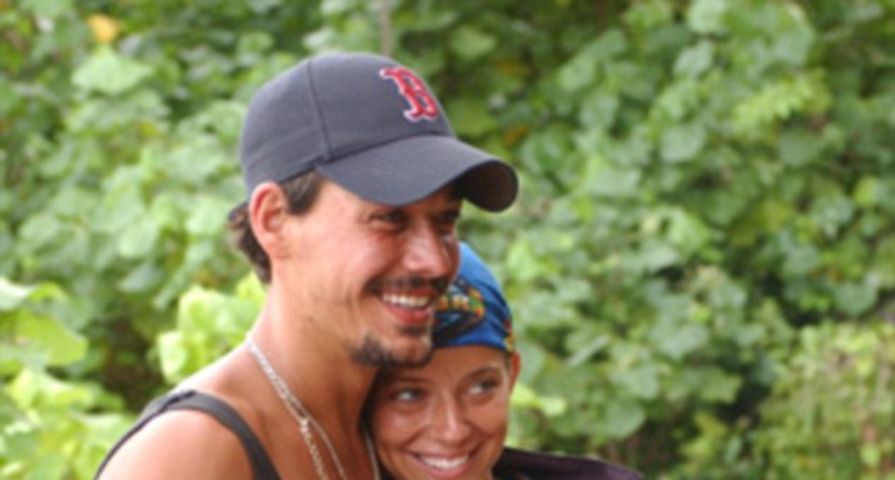 Forget The Bachelor and The Bachelorette — Survivor has churned out more couples over the years than both shows combined. Pretty much everyone knows penultimate Survivor couple Boston Rob and Amber, but how many of you knew that Russell Hantz and Mikayla Wingle once dated? That’s right, THE Russell Hantz and the girl Russell Hantz’s nephew Brandon was obsessed with. In honor of the upcoming season of Survivor, we’ve put together the ultimate list of real-life Survivor couples, some of whom have since broken up and others whose torches continue to burn to this day.

Not many fans are likely to remember these two mid-list players from different seasons, but Alex (Survivor: Amazon) and Kim (Survivor: Africa) were the second Survivor couple to get hitched, back in 2006 (preceded only by Rob and Amber). There is something to be said for the virtually non-existent media attention their nuptials attracted. Maybe the more you stay out of the public eye and away from reality TV, the better your chances are of making it as a couple in real life.

Of all the odd couples…notorious Survivor villain, Russell Hantz from Survivor: Samoa and Survivor: Heroes vs. Villains reportedly dated lingerie football player, Mikayla Wingle, from Survivor: South Pacific for a time after her season. There are so many reasons this is stranger than strange — not the least being that Russell was, by all accounts, married at the time and still is — but apparently he called Mikayla his girlfriend on Twitter and was photographed at various events with her. Mikayla is best remembered as the girl that Russell Hantz’s nephew, Brandon, couldn’t stop creepily staring at while they were both contestants on Survivor: South Pacific. In fact, Brandon campaigned hard to get her voted off because he was afraid if she stuck around, he might be tempted to cheat on his wife. It was hard not to roll your eyes as poor, conflicted Brandon struggled with his marriage vows (even though it never seemed plausible that Mikayla would want anything to do with him), but imagine what it must’ve been like for him to find out later on that his Survivor crush was dating his married uncle! No wonder the kid is so confused with role models like Russell Hantz in the family.

Todd, the winner of Survivor: China, and Spencer from Survivor: Tocantins were the first gay couple to come out of Survivor. They met in 2009, a month before Spencer’s season began airing on TV. While Todd was openly gay on his season, Spencer kept his sexual orientation a secret from his fellow contestants. But Todd announced their relationship publicly on social media while the season was playing out, so fans knew. Sadly, the couple split up after four years together, and Todd found himself at death’s door with a severe alcohol addiction. His family reached out to Dr. Phil, who staged an intervention and helped Todd turn his life around.

Another couple who met outside their respective seasons, Courtney (Survivor: China) and Stephen (Survivor: Tocantins), dated for a while after meeting in 2009. Courtney went on to compete in Survivor: Heroes vs. Villains the following year, with Stephen cheering her on from home. In a nod to Stephen, she wore the hat that he had worn throughout his season. Although the quirky couple eventually broke up, they remain good friends with Todd and Spencer, who started dating around the same time they did. Courtney, in particular, was a big source of support for Todd as he battled his addiction to alcohol.

Survivor: Redemption Island contestant, David Murphy, surprised a lot of people on the season’s reunion episode, when he proposed to his girlfriend, Carolina Eastwood (Survivor: Tocantins) who was sitting in the live audience. Carolina seemed most surprised of all, uttering the words, “Shut the flipping front door,” with a look of utter disbelief on her face, before she said yes. Sadly, their engagement didn’t last as David reportedly cheated on Carolina with Survivor: One World contestant, Alicia. Boo!

One of the few Survivor couples to have survived the test of time (pun totally intended), Erik and Jaime met on Survivor: China and bonded quickly. When Erik confessed to Jaime that he was still a virgin because he hadn’t met the right girl, he won Jaime’s trust and she shared information regarding the hidden immunity idol with him, cementing their on-screen partnership. Although they were both voted off after the merge, their showmance turned into a real-life romance when Erik proposed to Jaime the following year, in 2008. They remain happily married parents to this day.

Über popular Survivor contestant Ozzy (Survivor: Cook Islands) and sweet, beautiful girl-next-door Amanda (Survivor: China) looked as if they could easily be the next Rob and Amber as they steamed up the screen on Survivor Micronesia: Fans vs. Favorites. With both of them playing for the Favorites team, the two quickly hooked up after Amanda admitted she’d had a crush on Ozzy since seeing him on Cook Islands, and they soon formed a four-person “couples alliance” with Parvati and James. While Ozzy was blindsided and sent home, Amanda made it to the finale and viewers were treated to one of the most romantic Tribal Council speeches ever when Ozzy said to Amanda, “I honestly feel like I started to fall in love with you. I’m glad I didn’t win Cook Islands so that I could be here and meet you.” Amanda ultimately lost to Parvati, but she and Ozzy began dating after the show ended. Unfortunately, Rob and Amber they are not, as they eventually broke up. Both later went on to compete for a second time, but on different seasons: Amanda for Survivor: Heroes vs. Villains, and Ozzy for Survivor: South Pacific, where he won $100,000 for being voted “Sprint Player of the Season” by fans at home. So he didn’t get the girl in the end, but he got a nice chunk of change.

Whitney and Keith met in Samoa while filming Survivor: South Pacific, in 2011. They got engaged in February 2013 and were supposed to be married in June of the following year — but a call from the producers of The Amazing Race led to the couple putting off their wedding plans for a second chance at winning a million dollars. Although they didn’t win the race, they won at love, getting hitched soon after they returned to the States.

One of the most surprising hook-ups to come out of Survivor was that of host Jeff Probst and Survivor: Vanuatu knee-socks-wearing contestant, Julie Berry. Jeff reportedly fell hard for Julie in Vanuatu, but they didn’t start dating until after filming had wrapped and he e-mailed her to say hi. Jeff confirmed all the rumors that were circling around them, by proudly taking Julie’s hand as soon as the credits rolled at the Vanuatu season finale in 2004. Alas, their relationship ended after four years, and Jeff went on to wed actress Lisa Ann Russell in 2011.

One of the most memorable couples to have come out of the show, Survivor: Africa winner, Ethan, and Survivor: Amazon winner, Jenna, were Survivor’s power couple for a number of years while they were dating and remain entrenched in the hearts of many Survivor fans to this day. While the two had started dating before they began filming Survivor: All-Stars together, they kept their relationship on the down-low, and Jenna ended up leaving the show early to go home and be with her mother, who was terminally ill with breast cancer at the time. When Jenna’s mom passed away, Ethan — whose own father died when he was 14 — was there for Jenna, and the tragedy appeared to bring the couple even closer together. Sadly, after five years of dating, Ethan was diagnosed with a rare form of Hodgkins Lymphoma and began a difficult battle against cancer. Following a stem cell transplant, Ethan went into remission for 20 months, during which time Ethan and Jenna competed on The Amazing Race, but were eliminated after the second episode. In September of 2011, Ethan was told the cancer had returned to his chest and he underwent further chemotherapy, with Jenna always there by his side. It came as a big surprise to everyone who had followed their courtship that Ethan and Jenna broke up after ten years of dating in 2013. In July of this year, Ethan proposed to interior decorator, Lisa Heywood. “This is the reason I survived cancer twice…to meet Lisa and start a beautiful and healthy new life together,” Ethan was quoted as saying. We’ll be looking forward to wedding pics in the tabloids.

Our favorite Survivor couple ever, Greg and Colleen, had an on-screen chemistry back in the day when Survivor contestants would still eat rats to stave off hunger, vote alphabetically and sing campfire songs — that is back on season one, when no one but Richard had figured out the game. It was a time of innocence, and the relationship between self-described “journeyman,” Greg, and pixie-ish Colleen had a precocious quality to it, a sweetness that hasn’t been replicated since. Not that it was all innocent — the question, “Did they or didn’t they have sex off-screen?” became the focus of many on-line chatrooms at the time. Although their romance didn’t last beyond the show, with Greg moving on from Survivor to focus on his environmental career and Colleen doing a Rob Schneider movie and then competing on Survivor: All-Stars, they live on in our hearts as the sweetest Survivor couple to come out of the series.

Survivor’s most famous couple, Boston Rob and “Am-buh” (sometimes also known as “Romber”), met on Survivor: All Stars in 2003, and although they didn’t think much of each other before the game, they were assigned to the same team and formed a strategic alliance, which quickly grew into something more, with cocky, loudmouth Rob showing a decidedly gentler, sweeter side when it came to Amber. They dominated the season and were seemingly unstoppable right up until the very end when Amber was declared the Sole Survivor over Rob in a 4-3 jury vote. It obviously didn’t matter to Rob who won, because his intentions were clear — on the season finale, before Jeff Probst announced the million dollar winner, Rob got down on his knee and proposed to Amber, who said yes. In the spirit of reality TV, the pair went on to get married in a televised wedding special in 2005. They were also the first Survivor couple to go on The Amazing Race, coming in second place. They competed again on Amazing Race: All- Stars, where they didn’t perform as well. But Rob brought the glory back home in 2011, when he was declared the winner of Survivor: Redemption Island, as well as the “Sprint Player of the Season,” for which he won an additional $100,000. Before you start hating, Rob and Amber do seem to be genuinely in love and have four young daughters they will need to put through college one day. We wish these two love birds all the best.