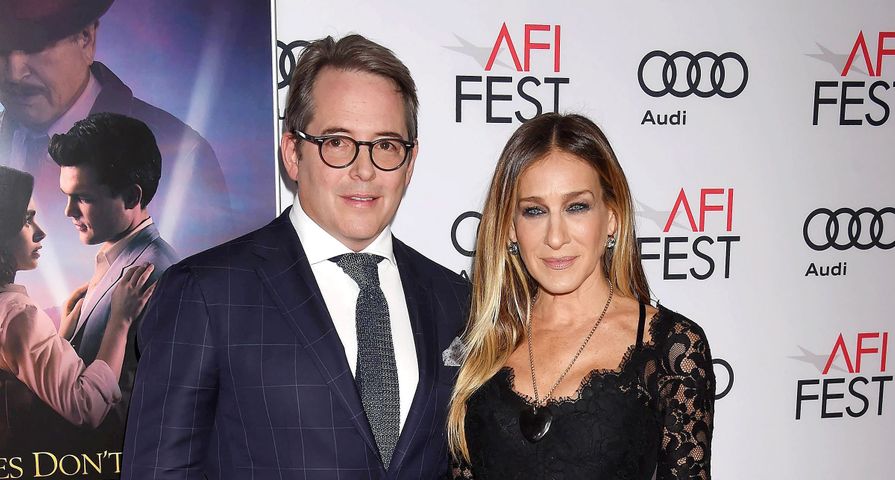 The Hollywood dating pool is very small and there are many celebrity couples constantly in the spotlight, but not all. Despite the individual popularity and fame of both Sarah Jessica Parker and Matthew Broderick, together the pair live a very low-key life and are rarely in the headlines. Twenty years together is an amazing feat for any couple but it is almost unheard of in Hollywood which only sets the couple even further apart from the rest. She may have been the man-crazy Carrie Bradshaw on Sex and the City, but in real life she is a one-man type of woman, so get to know the adorable duo better with these 10 things you never knew about Sarah Jessica Parker and Matthew Broderick and their relationship!

In the mid-90s to the early ’90s, Sarah Jessica Parker dated known party animal Robert Downey Jr. but after that relationship ended, those close to her knew she wanted something much more stable. Shortly after her split, Parker’s brother introduced her to Matthew Broderick in 1992 when he was directing Broderick in a play at the time. Three months after the introduction, Broderick finally phoned Parker and asked her out on a date. They then went to a small Manhattan cafe where he said she “talked a mile a minute,” and she said, “He just stared at me. It was like I was on a talk show. I started telling goofy stories.” The pair began dating immediately after and things got serious fast.

It isn’t uncommon for actors to fall for each other, but Matthew Broderick and Sarah Jessica Parker’s connection goes beyond the big or small screen. After meeting while Broderick was starring in a play directed by Parker’s brother, Parker has starred in five Broadway shows while Broderick has been in 13. In 2015 Broderick even starred in the Broadway production of Sylvia which Parker originally starred in back in 1995 when it first opened.

After more than 20 years together, the pair are one of the beacons for what a successful, famous couple looks like and when Parker began starring in HBO’s series Divorce in 2016 she couldn’t help but realize how unlike her own life it was. In an interview years before she said, “I love Matthew Broderick. Call me crazy, but I love him. We can only be in the marriage we are. We’re very devoted to our family and our lives. I love our life. I love that he’s the father of my children, and it’s because of that there’s this whole other world that I love.” Broderick even opened up about their secret to happiness at the premiere of Divorce. “Listen to her. You know, that helps. Give her a little present every now and then. Just be kind to her.” He added that “communicating” was also very important and never go to bed angry.

Over the course of their many years together, the pair have been praised as one of Hollywood’s best couples, but also the victim of many rumors about splits and an unhappy marriage and that is because they keep everything private, the good and the bad. When asked about how the two stars keep their personal lives so private, Parker said, “The secret is, we don’t discuss it. To reporters or anybody else. That’s it! We don’t hold it up as an example and we don’t air our dirty laundry.”

While they may work hard to keep everything private, the two were thrust into the spotlight for some time at least in 2008 when it seemed as if their marriage was on the rocks. At the time multiple outlets reported that Broderick had been carrying on an affair with a 25-year-old youth worker he had met in a Manhattan bar. While the scandal ran around the rumor mill and even sparked additional rumors that the two were divorcing, nothing ever came from the dramatics. Two years later cheating rumors again began when Parker took to her Twitter to attack a woman who had previously revealed Gordon Ramsay’s affair, making many believe she had dirt on Broderick and Park. Through it all Broderick and Parker never commented on the claims, and most certainly never divorced.

Those who are familiar with Sarah Jessica Parker’s trajectory in Hollywood know that as much as she is praised and loved by fans, she has many critics as well. Often attacked about her looks, in 2007 it came to a head when Maxim Magazine named the actress the Unsexiest Woman Alive. After receiving the distinction, Parker revealed she wasn’t the only one to take it personally. “It upset [Matthew], because it has to do with his judgment, too,” she explained. She added that she would like to confront the critics that made the decision. “My impression is that why they find sexy doesn’t make them very interesting or unusual or special. That makes them common.”

On May 19, 1997 after five years of dating the pair tied the knot in a civil ceremony at a historic synagogue on the Lower East Side in Manhattan. Like many celebrity couples, they kept the wedding a secret by not even telling their guests what was happening. They invited about 140 guests for a “party” only to then reveal it was actually their wedding. In an even more nontraditional move, Parker opted to wear an all black Morgane le Fay dress for her wedding. Parker revealed she chose a black dress because “our logic was we didn’t want to call attention to ourselves that day […] Matthew bought a suit off the rack and I bought the first dress I looked at.” Now the actress has admitted she regrets her choice and if she were to do it again or have a vow renewal, she said, “I’d wear a beautiful, proper wedding dress, like I should have worn that day.”

In 1992, just as their relationship started, Parker made it clear to Broderick that she wanted to have kids and he eagerly agreed. After five years of marriage, their dreams of a family began to come true as the pair revealed in April 2002 that they were expecting their first child. After a pregnancy that required producers to shorten season five of Sex and the City, the pair welcomed their son James Wilkie Broderick in late October 2002. After several years being a family of three, the famous duo surprised everyone when they revealed in April 2009 that they were expecting twins via a surrogate mother. In June 2009, the couple welcomed Marion and Tabitha Broderick, and later revealed that, while they had tried to have their own children after the birth of their son, Parker wasn’t able to have another successful pregnancy.

When you’re rich and famous, it is hard to stay low key, but these two have done it despite their incredible net worth. Together the two have an estimated net worth of $135 million. Of that astounding amount, Sarah Jessica Parker brings in an estimated $90 million which is thanks in large part to her iconic role as Carrie Bradshaw in the Sex and the City series and films. Matthew Broderick brings in his own $45 million which comes from his own successful career that includes his own iconic role in Ferris Bueller’s Day Off, as well as voicing Simba in The Lion King, and many other starring roles in the years since.

It is clear that Sarah Jessica Parker and Matthew Broderick are unlike most other celebrity couples for many reasons, but she says one of the biggest things that sets them apart is how they started out. They met before a lot of the fame and money, for her anyway, and when Hollywood itself was a little different. “Matthew and I come from a different time and place. When we were young people, all we ever wanted was to be good working actors. We didn’t think of the fame or money because, honestly, money was never part of the dream.” She added,” I never saw the trappings; nobody talked about being a celebrity.”