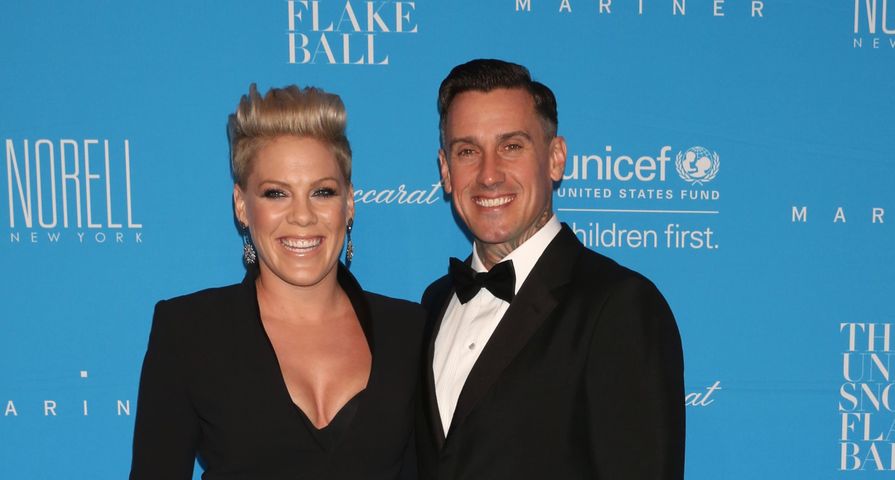 Pink and her professional motocross racer husband Carey Hart have had quite the rocky relationship. The pair has gone in and out of the media with the highs and lows of the relationship, and have remained somewhat elusive as a couple when at events and public outings. Unlike a lot of other high profile couples, however, the two speak openly about the good and bad times in their relationship which is a breath of fresh air in the entertainment industry. Here are 10 things you never knew about Pink and Carey Hart’s relationship.

All couples fight, but it seems that with two hot-headed personalities in one relationship, fights get very intense between the singer and her motocross husband. “We take breaks,” Pink admitted when asked how often she and Hart fight. “We’ve had two breaks… the first one was about a year, and the second was 11 months.” She added in the 2016 interview that the pair were probably “due” for another break soon.

Over the years, the loving couple has made it very clear that they are extremely supportive of each other’s careers, and as Alecia Moore (Pink) has attended Hart’s races, he has made his presence known in her career endeavors. Hart has now appeared in six of Pink’s music videos, starting with the one for her hit 2002 single “Just Like A Pill.” He has also been seen in the videos for “So What,” “Raise Your Glass,” “Just Give Me a Reason,” “True Love,” and “Just Like Fire.”

All romances have to start somewhere and it seems it all started the couple when they both attended the 2001 X Games in Philadelphia. It didn’t take long for the pair to start dating, and of their relationship, Pink has called herself a “reformed sl-t” and added, “Are things ever good? I don’t believe that exists. Long-term relationships are an everyday choice. It’s harder to be in a marriage than it is to bounce from one relationship to the next. We’re good because we communicate and we’ve grown up together, not because we don’t fight.”

Carey Hart and Pink have never been a traditional or conventional couple, so it shouldn’t be surprising that their engagement story isn’t either. After four years of dating, Pink proposed to Hart in June 2005. The singer was “assisting” in Hart’s Mammoth Lakes race that day, so she wrote “Will You Marry Me? I’m serious!” on a giant sign. It took a few laps for Hart to finally realize and veered off the track to accept her proposal, but she made him finish the race, telling him that she wouldn’t marry a loser.

Within a year after their unique engagement, the two were wed on January 7, 2006, at the Four Seasons resort in Costa Rica. They had around 140 guests at their beachside extravaganza which included 10,000 roses, the first dance to a song by Natural Born Killers, and handwritten vows. The wedding-goers partied for three days as the whole thing kicked off on January 5 with a luau, followed by a rehearsal dinner the next night and, of course, the wedding on the last night. Pink admitted that planning a wedding “transformed” her “into a girl.” “I became traditional and annoying and emotional—it was really strange and interesting for both of us.” She also revealed that for the first time in her whole life she experienced “stage-fright” the morning of her wedding.

Despite being together for more than a decade, it hasn’t always been an easy road for the pair, and they have in fact broken up more than once for long periods of time. In 2008, two years after their wedding, they announced that they separated. In the time they were separated they stayed close, however, after Carey’s brother, Tony, died in August 2008 due to serious injuries he sustained in a motocross competition, Pink stayed by Carey’s side for support even though they had split. In March 2009, Hart said that the estranged couple was “dating” again. They then broke up again for 11 months shortly after but were able to once again patch things up.

After their reconciliation, Pink admitted that, although they separated, they never gave up on their relationship and credited marriage counseling with helping them get back together. In 2013, after two splits, Pink revealed her own secrets for how she and Hart got back together. “I had made him a photo album of all the cards he had ever given me, of all the photos of our entire relationship. I spent months on this album. On the last page, I pasted a photo of me from a really bad movie I made years ago with my neck slit and blood everywhere. Next to it I wrote, ‘This is me without you.’ On the next page, there was a picture of a baby. And I wrote: ‘The rest is unwritten.’ The divorce papers that we never signed were behind that page. I was like, ‘The rest is up to you.’ And I did all of this in his favorite bra and panties.”

In November 2010, Pink appeared on The Ellen DeGeneres Show where she revealed that she and Hart were expecting their first child together! On June 2, 2011, the couple welcomed their daughter Willow Sage Hart. When asked about her daughter’s name, Pink said, “I love the idea that a willow tree cannot be snapped or broken. And we burn sage all the time, it clears bad energy.” After Willow’s birth, the pair made the decision to sell her first pictures to People Magazine and proceeded to donate the money they received from them to the Ronald McDonald House and Autism Speaks. On December 26, 2016 the pair then welcomed their second child, a son named Jameson Moon Hart.

Catch my music video for #JustLikeFire on the big screen when you see Alice #ThroughTheLookingGlass this weekend at Regal Cinemas!

The interesting pair prefers to keep their home life quiet and simple but can do so quite comfortably. In June of 2016, they listed their Malibu home for $12.9 million! It boasts 6,800 square feet with five bedrooms, six bathrooms, as well as ocean views, floor-to-ceiling windows, and a gorgeous swimming pool.

Happy anniversary to my MUCH better half. 10 years is a pretty amazing milestone for 2 misfits like us. I’m proud of us baby!!! Thank you for being an amazing wife, mother, and friend. I love you.

When it comes to celebrity couples, it is always interesting to find out just how much money they bring into the relationship, and it is safe to say Pink and Carey Hart have no worries when it comes to finances. Together the singer and the motocross star have a combined net worth of $170 million. Of that, Pink brings in $150 million herself while Hart adds his $20 million!