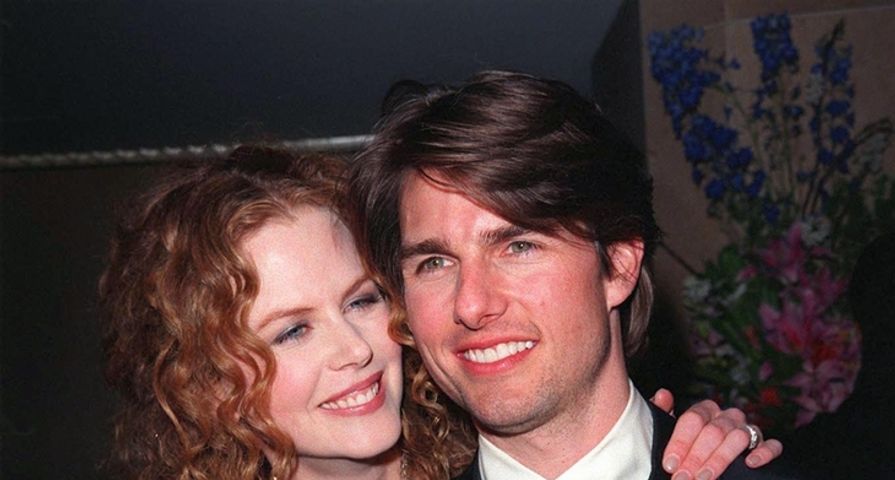 For 10 years, Nicole Kidman and Tom Cruise were one of Hollywood’s top couples. On the surface, both of them were successful actors, a happy couple, and devoted parents to their 2 children. But behind closed doors, the couple had their share of troubles that ultimately led to a divorce. We’ve rounded up a list of 10 things you may not know about Tom and Nicole’s relationship – from its happy beginning to its bitter end.

Nicole and Tom met around 1989 when they worked on the racing film Days of Thunder. Tom was 28 at the time, and Nicole was 23. Nicole was in the beginning stages of her acting career in the United States, and had been approached about a role in the Jerry Bruckheimer film. Speaking about her excitement, Nicole told Vanity Fair, “I thought, Wow! This is America! Tom Cruise wants to meet me. He made Top Gun and Cocktail—the films I grew up watching.” The two had an instant connection. “He basically swept me off my feet,” Nicole stated. “I fell madly, passionately in love. And as happens when you fall in love, my whole plan in terms of what I wanted for my life—I was like, ‘Forget it. This is it.’ I was consumed by it, willingly.”

Cruise proposed to Kidman in 1990 shortly after his divorce from Mimi Rogers was finalized. Just a year after they met, Nicole and Tom married on Christmas Eve in Telluride, Colorado in 1990. The wedding ceremony was reported to have been performed in candlelight.

During their 10 years together, Tom and Nicole adopted two children – a daughter, Isabella Jane born in 1992, and son Connor born in 1995. The children were raised as Scientologists, as Tom and Nicole were both members of the religion at the time. The couple struggled to have any biological children. In a 2007 interview with Marie Claire, Nicole revealed that she had an ectopic pregnancy early on in their marriage. The couple also had a miscarriage near the end of their relationship.

It’s common knowledge that Tom Cruise is a Scientologist, having joined the Church as a result of his first wife, Mimi Rogers. A lesser known fact is that Nicole is a Catholic, but converted to Scientology after getting together with Tom. Apparently the Church grew increasingly unhappy with Tom and Nicole’s relationship, and her lack of devotion to the organization. According to a testimony by Marty Rathbun, a former official of the Church, Kidman kept Cruise away from the church throughout their relationship, which prompted the organization to wage a forceful campaign to get the couple to divorce. Rathbun alleged that Kidman’s phone was wiretapped, as per Cruise’s advice, and that the tapes were sent to the head of Scientology, David Miscavige for monitoring.

Nicole said she never felt entirely at ease during her relationship with Tom. Although she was in love with him, things didn’t quite click in the way she hoped. “In those early years, it was like, ‘I’m here and I’m clutching onto your arm, and it all feels a little overwhelming and really strange,’” the actress recalled in a Harper’s Bazaar interview in 2012. At the time, Nicole was still trying to establish her career and felt overshadowed by Tom’s fame. “I was shy. Deeply shy. I didn’t feel comfortable at all. But I felt very comfortable at home.” The marriage also struggled after their 1999 film Eyes Wide Shut, which did poorly at the box office.

Just 2 months after their 10th wedding anniversary, Cruise filed for divorce. The actor didn’t explicitly state the reason for the filing, only saying, “Ask Nicole. She knows why.” Cruise later released a statement that cited “difficulties inherent in divergent careers.” The divorce proceedings were messy because Cruise tried to avoid splitting the assets. According to California law, couples must split their assets equally after 10 years of marriage. Cruise alleged that they had only been married for 9 years and 11 months. The divorce was eventually settled out of court with Cruise winning custody of their 2 children. Reflecting on the split, Kidman told Oprah, “I think that divorce is hard for anyone. It’s a nightmare, it just is, and you can pretend you’re fine. And days you’re great [and] days you’re not great.” The divorce was finalized on August 8, 2001.

While Tom has stayed quiet about the divorce, Nicole is more open about the aftermath of their split. “It took me a very long time to heal,” Kidman told DuJour magazine in 2012. “It was a shock to my system.” Rather than deal with her difficult emotions, Nicole tried to avoid them. “To be completely honest, I was running away from my life at that time. I wasn’t able to handle the reality of my life,” she said at the 2015 “Women in the World Summit” at Cadogan Hall in London. She also called the split “the loneliest, loneliest existence.”

Since the split, Nicole has had limited contact with her children Connor and Isabella. “They live with Tom, which was their choice,” she told Hello! magazine in 2010. “I’d love them to live with us, but what can you do?” Several reports claim that the Church of Scientology worked to turn the children against their mother and “re-educated” them according to Church doctrine. “My kids don’t call me ‘mommy,’ they don’t even call me ‘mom.’ They call me ‘Nicole,’ which I hate and tell them off for it,” she once revealed to GMTV. Nicole was not invited to her daughter’s wedding on September 18, 2015. In fact, she didn’t even know the ceremony was taking place. Reports claim that it was a Scientology ceremony paid for by Tom.

After their divorce, Tom and Nicole both moved on to new relationships. In 2006, Tom married actress Katie Holmes after a whirlwind romance. The same year, Nicole tied the knot with Aussie country singer Keith Urban. Nicole said she felt more fulfilled in her life after her split with Tom. “Having your work be the basis of fame, that’s a far more stable feeling,” she said. Nicole and Keith are still happily married, whereas Tom and Katie split in 2012.

In January 2016, reports claimed that Nicole and Tom reunited after almost 15 years apart. The two met for dinner in London to discuss their daughter Isabella, who was rumored to be pregnant. The reports said Nicole was surprised to be contacted by Tom, but decided to meet him in the hopes of reconnecting with her children.