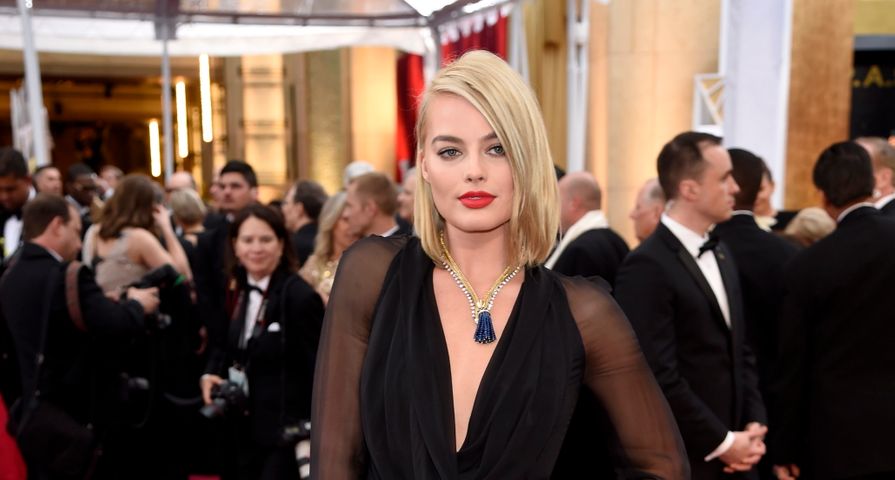 If you don’t know who Margot Robbie is, it’s only a matter of time before you do! The 25-year old Australian actress first really began capturing world-wide attention for her role as Naomi Lapaglia in Wolf Of Wall Street and now the role that’s getting everyone talking about her: Harley Quinn in Suicide Squad. Margot is fast becoming the latest “it” girl, not just for her gorgeous looks but also her talent, and of course, her social life. Here’s some things you may want to know about the rising starlet.

Late December 2015, Margot followed who she thought was Ed Sheeran into a photo booth for a group picture at a star-studded house warming party for Suki Waterhouse. She then found out that it was Prince Harry. Later in an interview with Jimmy Fallon she explained herself by saying “he wasn’t wearing a crown.” Soon after the photo hit Instagram, the tabloids instantly spun this as a new romance between Harry and Margot. Looks like those are just rumors. On the bright side, you know you’re becoming an A-lister, when you’re rumored to be dating the Prince!

9. She Once Hit Leo DiCaprio

When auditioning for the role of Naomi in Wolf Of Wall Street, she was in a room with Martin Scorsese and Leo. Given her lines to read, she began to seemingly panic when DiCaprio starts ad-libbing and doing improv, away from the script. Realizing she needs to make an impression, Margot acts out on her final audition scene where was was supposed to KISS Leo, and she hits him instead. In an interview she retells the moments afterwards saying, “I’m thinking, ‘You just hit Leonardo DiCaprio in the face. They’re going to arrest you because that’s assault. You’re definitely never going to work again, that’s for sure. They’ll probably sue you as well in case there’s a bruise on his face and he needs to film something else.’ And then all of a sudden Marty and Leo just burst out laughing. Marty says, ‘That was great!’ Leo’s like, ‘Hit me again!'” A week later, at age 22, she was offered the role, and it was the catalyst for her career today. Seriously though, who gives up a chance to kiss Leo and slaps him instead? This woman deserves to go places for that sacrifice.

Before acting, Margot was struggling financially and she hustled to make it all work. Not many teenagers are faced with such a heavy amount of responsibility, but she managed. She worked at Subway, a local surf shop and she cleaned houses. During that time she was asked to be a part of a low-budget movie filming close by, and after that she got an agent and began her acting career.

In Australia, Neighbours is a big deal. It has a cult following and over 30 years on the air. It’s seen Kylie Minogue, Jason Donovan, Russell Crowe, Guy Pearce as well as the Hemsworth brothers in their own humble acting beginnings. Margot Robbie had a guest role and impressed enough to land a regular role on the show. She stayed on the show for 3 years, filming for 17 hour days, 5 days a week.

Currently, Margot Robbie is 25. With fame, people like to dig. They will dig up whatever they can, and lately it’s been about her age. After what seemingly appears to be an error in a 2008 article stating she was “23” it’s now come to question whether or not the actress is 25 or 30. It’s not the first time her age has been speculated as falsified and in an interview with Elle last year she said, “People seem outraged that I’m 24. People think I’m a decade older.” Here’s hoping Margot can relish in her youth a while longer; it’s pretty much the worst thing ever to accuse a woman of being older than she is.

In an interview with Vogue, she describes first reading the script of the Suicide Squad character, Harley Quinn, who is a murderous psychopath and girlfriend to the Joker. Margot was hesitant to play her saying, “When I first read it, I thought, I have nothing in common with her. I hate her. It was a really tricky one to get my head around. But her motivation was ‘You guys are doing it—why shouldn’t I? It’s this man’s world, and I’m going to get mine.’ And I understand that.”

4. She Went to Circus School

At age 8, her mother sent her off to a trapeze program at a Circus School and she did indeed earn herself a “trapeze certificate.” That certificate came in handy, for stunt-heavy roles like Harley Quinn, as well as playing the iconic Jane of the jungle in Tarzan this year.

She’s still young with a good metabolism, but with that body, it’s hard to think of her with a BAD diet. Yet, in an interview with GQ, she was asked if she was “extremely healthy” (since that’s a common trait amongst many Australians), and she replied, “I don’t have a very good diet. I love beer, fries, burgers, but if I have to get in a bikini then I eat carrot sticks for three days. I’m one extreme or the other. I’m not good at doing moderation. I get miserable if I don’t eat. I can’t just have a salad every day and half a glass of wine every second day. Can’t do it.”

So, safe to assume good looks and talent run in the family? While his IMDb is still relatively blank, if Cameron Robbie is anything like his older sister, things will happen fast. He’s on the rise, and now with a sister in high places to help him along the way.

It’s a bit of a shock to take this tall blonde, leggy woman who just oozes sex appeal, and figure her a tomboy? Well, why not…she’s just more and more a man’s perfect fantasy, who just happens to be real. In 2008, in an interview on the Neighbours website, Margot said, “I’m happiest when I’m surfing or out on the farm hunting wild pigs, building cubbies out in the paddocks or riding around on motorbikes.” Since moving to North America, she’s also taken to ice hockey, both as a fan, and as a player! In an interview with film.com she said, “I play on a team but I’m definitely the worst on the team. I’m not so good at the ice skating part. The hockey is good, but the ice skating I need to work on.” She’s also been seen in the stands of New York Rangers games, and admits to being a hard core fangirl for the team.