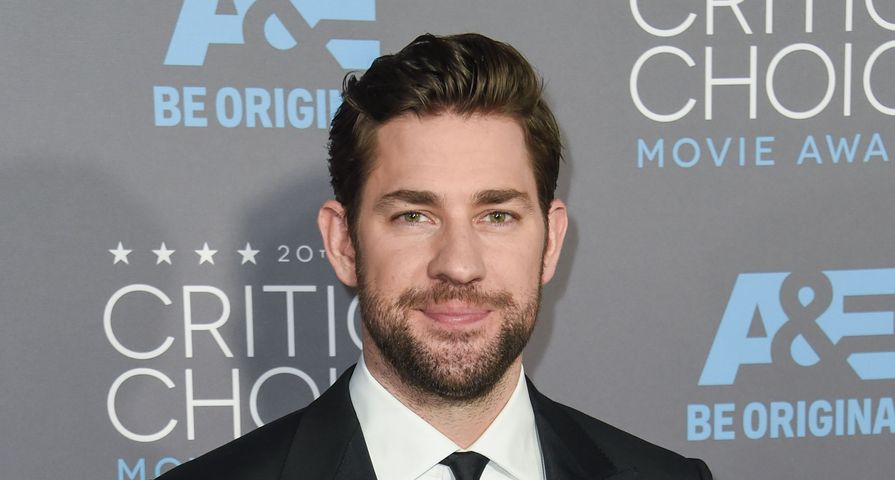 John Krasinski is best known for his long-time role on The Office as Jim Halpert, but lately he’s proving he’s more than just a small-screen comedian. His career has been on the rise ever since he joined the series back in 2005 and today he’s recognized as a major movie star and filmmaker. He recently landed roles starring in big box office films like 13 Hours: The Secret Soldiers of Benghazi and Aloha, while his latest project is a combination of starring, directing and producing for the upcoming film The Hollars. He’s on top of his game professionally and in his personal life. He’s married to fellow actress, Emily Blunt, and is a new father to their two daughters, Hazel and Violet. Referencing what he calls his life as his “lottery-ticket life,” Krasinski is definitely happier than ever! In celebration of this and his upcoming 37th birthday, we’ve complied a list of 10 things you might not have known about the adorable actor!

He made his stage debut in grade six as Daddy Warbucks in a school production of the play Annie and pursued acting all through high school by participating in school productions, and then studied theater at Brown University. After that he attended the National Theater Institute in Connecticut. Krasinski’s parents have been his biggest supporters: “I just said in the back of the car, I said, ‘I want to move to New York and be an actor.’ And without hesitation my mom said, ‘Great. Just promise me one thing: That in 2 1/2, three years, if you don’t have a bite, if there’s not that idea that maybe something’s coming, you have to pull yourself out of it, because the only thing you can’t ask me to do as your mom is to tell her son to give up on his dreams.'” Of course, when he made the move to New York he struggled for about 2 1/2 years. He was doing mainly commercials and off Broadway plays when he decided it was time to throw in the towel. It was his mother who encouraged him to finish out the year and sure enough, three weeks later he got a role on The Office.

It would seem from all his acting experience as a kid that he always wanted to be an actor, but in an Q&A on Twitter, Krasinski dished that he actually wanted to be an English teacher when he was younger, not an actor. “I actually never intended to be an actor. I went to college to be an English teacher, probably based on a movie because I had seen Dead Poets Society and thought, ‘I can get kids to stand on desks. Perfect.’ No, I love teaching and I loved English, so I thought that’s what I was going to do until I got bit by the bug, or so they say,” said Krasinski.

John Krasinski admits that he’s a huge comedy nerd. He’s been tuning into shows like Saturday Night Live since he was 6-years-old. “I will say, if you asked me what the most influential comedy thing is for me, 100 percent it’s Conan O’Brien…I was his intern, which is very surreal. Truly I could say the most surreal experience of my entire career was doing his show for the first time. I walked down a hallway where I knew everybody. I knew all the crew members, they all said how proud they were to have somebody come back full circle, and it was just so emotional that I promise you, I’m not exaggerating when I tell you when they pulled the curtain to let me out I blacked out. I don’t remember any of it…While everybody was clapping, I heard him say, ‘Don’t worry, it’s going to be ok.’ It was one of the best moments of my career,” said Krasinski.

John Krasinski played on the same little league team as his Office co-star, B.J. Novak. Then in high school he co-starred in a satirical play written by his future co-star, B.J. Novak. “John Krasinski and I have known each other our whole lives in the weirdest most coincidental way. We played little league together. There’s a picture in my house of a little league team that I was on in sixth grade and I was sick that day the photo was taken, so John is in this photo that’s been in my house my whole life and I’m not. That’s how bizarre the whole thing is. But, we’ve known each other forever and we showed up at the final audition, call back for The Office and there he is for Jim and I’m there for Ryan. It’s so bizarre that sometimes I think if I ever woke up and the whole Office had just been a dream, I’d be like ‘I should have known, like, you know who played Jim? John from high school.’ It’s that weird,” said Novak on the Ellen DeGeneres show back in 2014.

6. He Taught English is Costa Rica

In an interview with Women’s Health Magazine, Krasinski briefly mentioned that he had taught English in Costa Rica before he went to college and that it was one of the most gratifying thing he’s ever done. “I taught English in Costa Rica before I went to college. I’m not an especially outdoorsy guy, but sometimes I would spot wildlife while whitewater rafting or walking in the rainforest at 5 a.m. When you feel that kind of awe, I’d say that’s it,” he said.

5. How He Met Emily Blunt

There’s no denying that John Krasinski and Emily Blunt are one of the cutest couples in Hollywood. They are constantly gushing about one another in interviews and on when they walk the red carpet, they’ve only got eyes for each other. When Krasinski was on the Ellen DeGeneres show he talked about how he first met Blunt. “It was one of those things where I wasn’t really looking for a relationship and I was thinking I’m going to take my time in L.A. Then I met her and I was so nervous. I was like, ‘Oh god, I think I’m going to fall in love with her.’ As I shook her hand I went, ‘I like you.'”

4. He Cooks on a Weekly Basis

John admits that he’s not exactly the best cook but he cooks for his wife, Emily Blunt, on a weekly basis ever since he lost a bet to her. On Jimmy Kimmel Live, he said that it only took him 36 years to learn how to cook. He said it started out as a Mother’s day gift for Emily when he cooked a roast chicken for her and despite her forewarning that it would be a hard thing to cook, he said it turned out to be “one mean roast.” What started out as a one time thing has now turned into a weekly event since he lost a bet. Krasinski said: “We made a stupid bet, and I lost. The bet was, Emily said something about Leonardo DiCaprio being 41 and I said, ‘How dare you!’ And I said, ‘that cherub of a man–that cherub of a talent–can’t be more than 28.’ I said he’s not over 40, was my thing. And she said, ‘If I’m right, you have to cook for me every Sunday and if you’re right you get to play Call of Duty once a week.'”

John Krasinski has no problem gushing over the incredible talent of his wife, Emily Blunt, but what’s surprising is the fact that even before he was met the English actress, he was a huge fan of her film The Devil Wears Prada. He confessed on the Today show that he’d seen the movie more than 75 times. “Yeah, I might have been lying. It might be over 100. I think I saw a good 50 of them before I ever met Emily. So what you’re getting on camera is…you’re getting a confession that I was her stalker, and I somehow pulled off a wedding.” The first time he saw the movie was by fluke because the superhero film he wanted to see was sold out, so him and a friend went to see chick-flick that had gotten good reviews. “We said, ‘Oh, this movie, I’ve heard it’s pretty good. It’s got the word ‘devil’ in it — real masculine. Let’s get in there. And then we saw it, and I remember at the end, I thought it was one of the best movies I’d ever seen,” said Krasinski. She almost caught him watching it when they first started dating. “A week or two into dating, she popped by my house to say hi. I was watching it because it was on TV. She opened the door, and I flicked the channel so fast I think she thought I was watching something inappropriate,” he joked.

2. Audition for The Office

He showed up to the audition for The Office with about 50 to 60 other people who were all trying out for the same role. He ended up sitting across from a guy who asked him if he was nervous, and he replied: “Oh no, you either get these things, or you don’t. What I’m really nervous about is them screwing up a perfect show. The Americans always have the ability to screw up these amazing British shows and I’m afraid this is going to be another one of them.” The guy he was sitting across from ended up being Greg Daniels, the executive producer. “I genuinely almost threw up right on his shoes…He later said, ‘Honesty is the best policy. It’s the reason you got the role.’ I think he’s still just being nice. I wouldn’t dare try it again by going into auditions now and saying, ‘I think this movie’s going to be horrible,'” said Krasinski.

John Krasinski and Emily Blunt got married on July 10, 2010 in Como Italy. In fact, they actually got married at George Clooney’s house! Krasinski admitted that his hometown friends were a little disappointed that he didn’t get married in Boston and that he agreed to get married on Lake Como because he didn’t want to hurt Clooney’s feelings! If only we all had that problem! In an interview with Elle, Krasinski said: “I grew up with the Boston vibe and the Catholic vibe. I don’t want to put anybody out. George said, ‘I have this place and you should feel free to use it.’ Only on the fourth ask did I say yes. Because the first three times I thought, there’s no way he is serious. But I started to see his feelings get hurt. I actually hurt George Clooney’s feelings.”