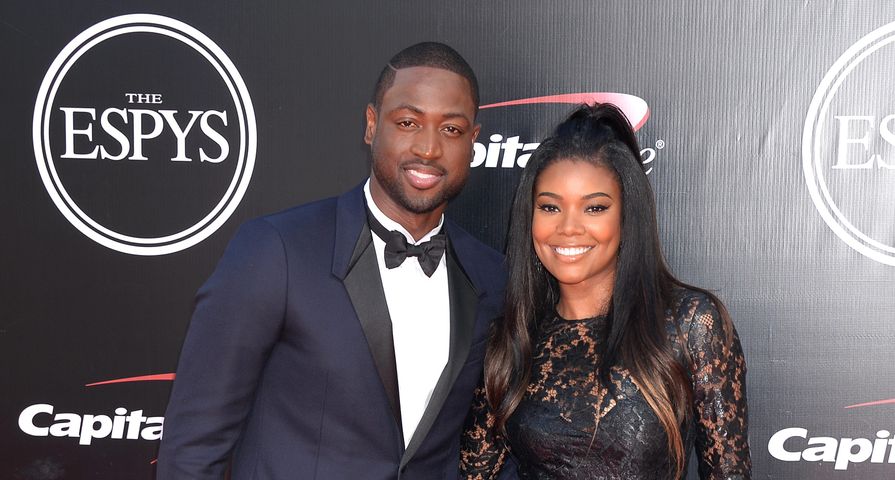 When it comes to celebrity-athlete relationships, Gabrielle Union and Dwyane Wade are one of the best couples out there. They are fun-loving, down-to-earth, completely in love and just happen to be two loved celebrities. A nine year age gap between the 43-year-old Union and 34-year-old Wade made Union hesitant about a relationship at first, but now they have been happily married for a couple of years, and have let fans into their life with cute photos and updates on social media. It hasn’t always been an easy road for the pair, but they have overcome a lot of obstacles together and are happier than ever! Check out 10 things you didn’t know about Gabrielle Union and Dwyane Wade’s relationship:

It would seem natural that two extremely good-looking and talented people would meet and fall in love, but it wasn’t that easy for Gabrielle Union and Dwyane Wade. They actually first met in 2007 while they were both slated to co-host a Super Bowl party. Naturally it was a sponsored event and they were both hired by promoters, so it wasn’t your average living room full of friends Super Bowl party. Despite Wade showing interest, sparks didn’t fly for Union right away. Years into their relationship, she opened up about what she intially thought after meeting Wade. “[Wade’s resume] looked like crap: Athlete, going through a divorce, nine years younger than me. Then, after I had a heart-crushing breakup with yet another immature jerk, I thought, it can’t be any worse if I date a fetus. Let’s just see what happens.” Luckily, she took a chance on “the fetus” which is her younger significant other, and the two officially began dating in 2009.

After a few years of dating, Union and Wade abruptly broke up in early 2013 which they said was because of “distance and scheduling,” but they obviously didn’t lose contact because they were back together before the end of the year. The breakup and makeup didn’t come without scandal ,however, because during the brief split Wade got a longtime friend, Aja Metoyer, pregnant. Metoyer gave birth to a baby boy, Xavier, in November 2013, one month before Union and Wade reconciled.

Although Union tried to talk herself out of falling for Dwyane Wade because of his age, it is quite clear she just has a weakness for athletes. While she was in high school, Union dated none other than Jason Kidd who went on to become an NBA star. In 1999 she then met NFL player Chris Howard and they married in 2001 before splitting in 2005. As for Wade, he married his high school sweetheart, Siohvaughn Funches in 2002, but they divorced in 2007 and finalized it in 2010 after a nasty court battle, with Wade getting full custody of his two sons, Zaire who is now 14 and Zion who is now 9. Union was his next fully committed relationship.

After a rough patch and a reconciliation, Dwyane Wade knew he couldn’t let Union get away again, and he planned an extremely sweet proposal. In an appearance on Good Morning America a month after the engagement, Union revealed what Wade had planned and how he involved his sons Zaire and Zion. “They wanted to catch me off guard. We were just spending what I thought to be a fun day with the kids, having a little quality time. We went to brunch, and we went to tour out house, which is being constructed. It’s a construction site…it’s nowhere close to being done. I should have known something was up when [Dwyane] was like, ‘Are you gonna do your hair? Are you gonna put on makeup?’ I’m like, ‘To go to a construction site? No.'” Then as Wade distracted Union upstairs, his sons waited by the pool and when Wade and Union came down, the boys said, “‘We wanna do a presentation for you.’ They like to do skits and songs and stuff, so we turn around, and they’re like, ‘Okay, we’re ready!’ and I turn back around and all the boys were holding up signs that said, ‘Will you marry us?'” At first, however, Union didn’t take it seriously. “They’ve been asking us to get married for two years and they talk about it all the time, so I’m thinking they’ve just made signs. I was like, ‘Well this is awkward.’ I turn to look at D like, ‘Ugh, they just made some signs,’ and he’s down on one knee with a ring and said, ‘Will you marry us?’ And I was like, ‘Oh, this is serious! This is a thing! Yes! Of course, yes!'” Her engagement ring is 8.5 carats and cost almost $1 million, while Wade picked out the stone and made the custom ring with Jason Arasheben.

On August 30, 2014, Union and Wade were finally married in Miami, Florida. The pair wed in what was described as a lavish event at the Chateau Artisan estate which has a private lake and looks like a castle, complete with a moat. The entire wedding cost around $5 million, and as it turns out, the day was more for Wade than Union. “He realized that I was trying to turn it into a frat party with K-cups and beer pong, and he took over. He really Kanye’d himself and really doubled down, and it’s his princess day, and I’m just along for the ride,” Union joked. There was a strict black and white dress code for the day and luxury buses transported the estimated 200 guests, which included the likes of LeBron James, Kevin Hart, Carmelo Anthony and John Legend.

With high profile relationships, there is often a lot of money brought into it from both sides, and that is definitely the case for Gabrielle Union and Dwyane Wade as a well known actress and NBA superstar. Combined the pair have an absolutely whopping net worth of $106 million. Union brought in her own $16 million while Wade has a net worth of $95 million and a yearly salary of $20 million.

She may have been a fantastic cheerleader in Bring It On, and it seems she took her talents to real life when it comes to cheering on Dwyane Wade as he plays for the Miami Heat. Unfortunately, Union explained that she maybe got a little too into it and has been banned from sitting courtside at Wade’s games. “That got killed when I became too vocal,” she explained in 2012. “He was like, ‘We’re going to need you to sit a few rows back because I can hear you.'”

For all of the years they have been together, it seems their affection only grows more and more, and both have explained it has to do with still lusting after each other while being completely in love. In an interview with Glamour, Union stated, “I think he’s so delicious. Watching him get out of the shower never gets old. Never.” Meanwhile at the Straight Outta Compton premiere in August 2015, Wade was seen being starstruck by his wife’s stunning looks as he took photos of her instead of with her on the red carpet.

As with almost all marriages which involve at least one celebrity, Wade and Union both thought it was important to have a prenuptial agreement before their August 2014 wedding. Union opened up about deciding to have the pre-nup after many media outlets made it seem like it was for Wade to protect himself, and she made it clear she was doing it for herself too. “For women in Hollywood when they’re coupling everything is about the brand. Everything is about latching on to a rising star, so you can kick your heels up. That’s never been my story, ever. I make sure to let people know all of the hard work that’s gone into my career. I want people to know the work that it took to get through UCLA, that I had student loans and worked. I was eating Top Ramen and lived well below my means. Now that it’s time to get married to a man who happens to play basketball and has done well for himself, I want to make it clear that I have in no way hitched my wagon to his star. I have my own wagon and star.”

Despite having millions of dollars combined, it seems Gabrielle Union and Dwyane Wade like the simple things in life. As well as a Miami home, they also have a Los Angeles home where it is much easier for Wade to go around unnoticed. “One of D’s favorite things to do as a family is go to Walmart. We really enjoy Walmart, Target, going to the grocery store. He loves to take the dogs to the car wash. He’s the guy with the Maltese at the car wash! But in Miami, it’s more challenging. He’d never make it through Walgreens. Although I have attempted to send him for tampons, he won’t do it! Can you imagine?”