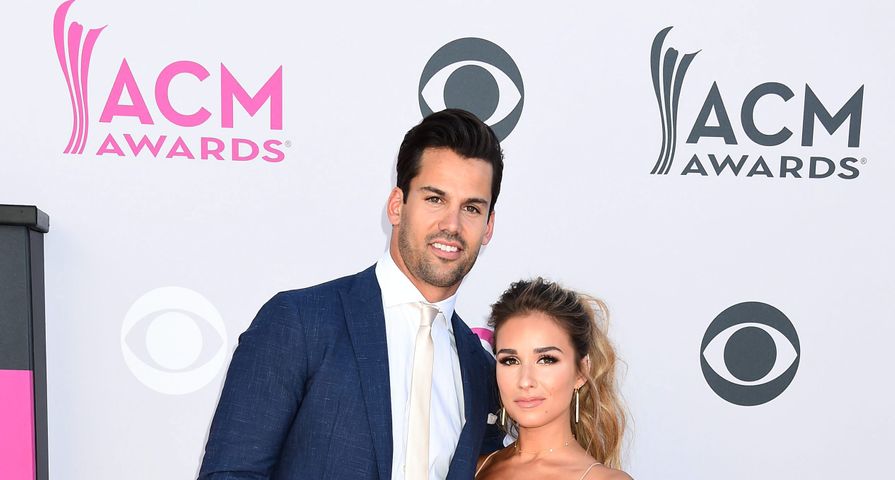 The world of entertainment and sports has collided more than once in terms of relationships between popular stars and big name athletes. When it comes to singer Jessie James and NFL player Eric Decker, it didn’t take long for fans to fall in love with the gorgeous couple which landed them their own reality show on top of their demanding schedules. Through all the highs and lows, these two are always there for each other and it is more than obvious that after five years of marriage, they are just as in love as the day they met. With a new season of Eric & Jessie: Game On, here are 10 things you didn’t know about the charming celebrity-athlete couple and their relationship:

While celebrity-athlete relationships are common, they don’t exactly have that many instances to meet, so it was all thanks to friends that Eric Decker and Jessie James were introduced in 2011. While Eric joked they met on Match.com, the actual story is that a mutual friend set them up. “He was in Arizona training, and I got a text from a girlfriend who said, ‘I’m having dinner with this guy I’m seeing, and this other guy just showed up, and he’s stunning,'” Jessie explained of her friend meeting Eric and immediately thinking Jessie would like him. So, her friend took a picture of Eric and sent it to her, and Jessie replied, “Show him a picture of me, and see if he’s into it.” Turns out Eric was “into it” and the friend helped the pair exchange numbers. 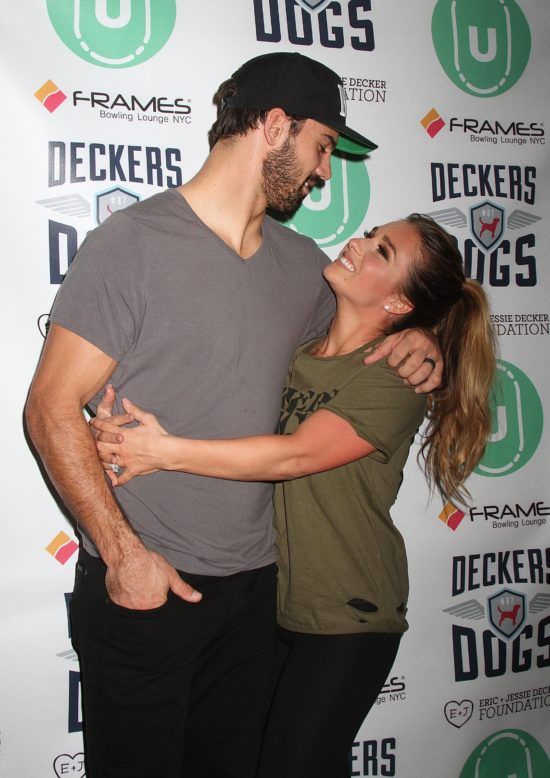 9. Getting Around to Dating

Unfortunately, with their different schedules and being in completely different states, it wasn’t easy for the pair to actually date. For about a month the two talked on the phone, texted and video-chatted until finally Eric “invited himself” to Nashville to meet her. Even though they had spent a few weeks getting to know each other, Jessie panicked and actually cancelled his flight the first time he tried to fly out and see her. Finally, when the pair did meet in person for the very first time they hit it off immediately and after spending the weekend together they became official. “On the way to me taking him to the airport he asked me to be his girlfriend, literally like an 8th grader, and we’ve been together for over six years now,” Jessie said in an interview about getting their relationship off the ground. 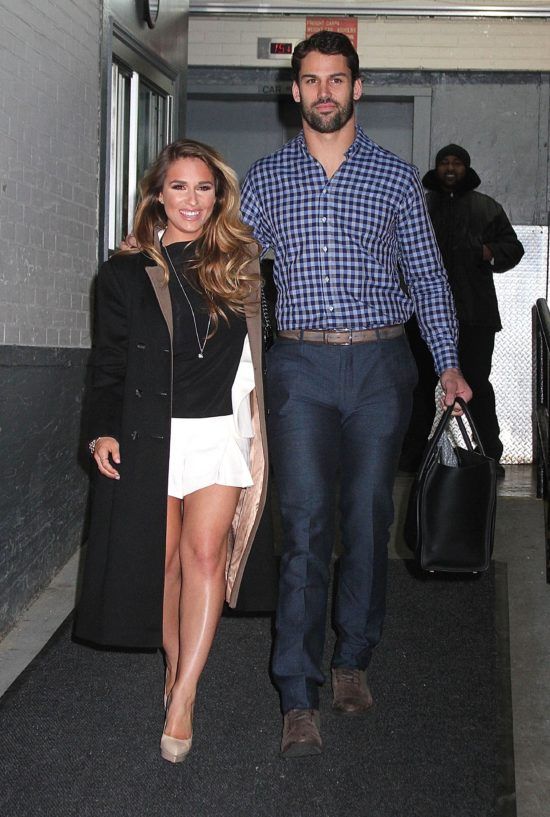 Although many would say being jealous in a relationship isn’t good for the couple, Jessie James has a different outlook on it. “I think it is healthy to have that jealousy! He and I both are the same person when it comes to a relationship! If we’re at a dance party and girl wants to dance with him and a guy wants to dance with me, we’re not into it! Even though it’s just friendly, we both get jealous! As long as he’s honest with me, which he is, we’re fine!” 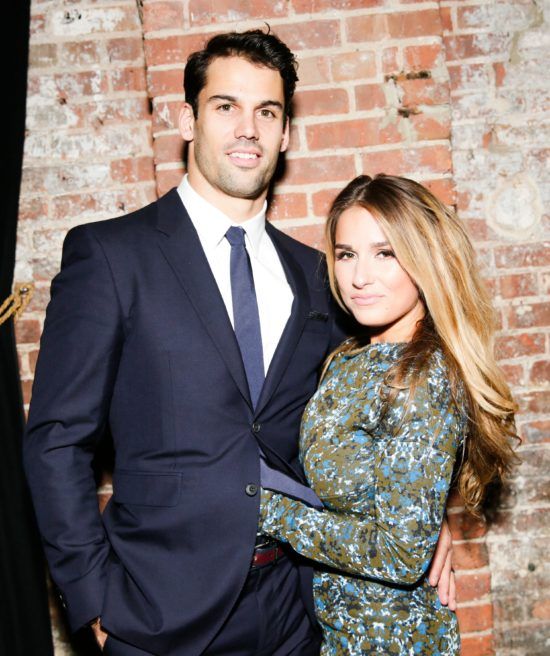 With Eric’s NFL career playing with the Denver Broncos, New York Jets and now Tennessee Titans, Jessie James had to make a lot of concessions including moving her family from Denver to New York and has never wavered in her support of her husband. At the same time, Jessie was working on her music career but when asked about the the pros and cons of marrying an NFL player she said, “I think the pros are everything — it is so much fun to be a part of something so exciting. And I’m impressed by him every time he’s on the field. He’s such an athlete and God gave him talent and he works his butt off. The con: You never want to see your loved one get hurt. That would be so scary, right?” Eric has also made sure to put in effort to support his wife as well and while with the New York Jets talked to his coach about missing practice to attend the 2014 CMT Awards in Nashville with her. “Obviously, she’s very important to me and her career is very important to me as well,” Decker said. “Any relationship is give and take. It’s funny how this became such a story. It was an opportunity to get down there [to Nashville] and be around our friends and be around the music industry that she’s a part of.” 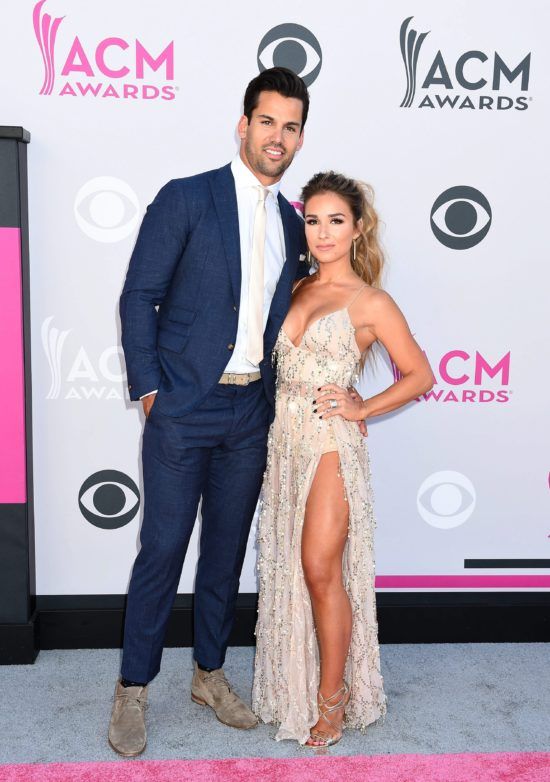 In early April 2012, a few days after their one year anniversary, Eric Decker popped the question and the two began planning their wedding, much of which was seen on their show. On June 22, 2013, the pair were married at St. Francis of Assisi in Castle Rock, Colorado, and held their reception at the gorgeous Castle Cliff Estate. Jessie wore a stunning strapless Anna Be by Vera Wang princess ball gown dress. Along with an assortment of cakes and cupcakes, the couple paid tribute to Eric’s career with a football themed portion of chocolate cupcakes taking up a substantial part of the cake table. The whole wedding was then featured on the season one finale of Eric & Jessie, and while they stayed traditional on some things, there was one tradition they couldn’t stick to. Jessie explained, “We did spend the night together before the wedding. I was planning to be with girls, and then after the rehearsal dinner, [staying with him] was his last minute request. He was like, ‘I just want to spend the night together! I don’t want to be apart,’ and neither did I!” 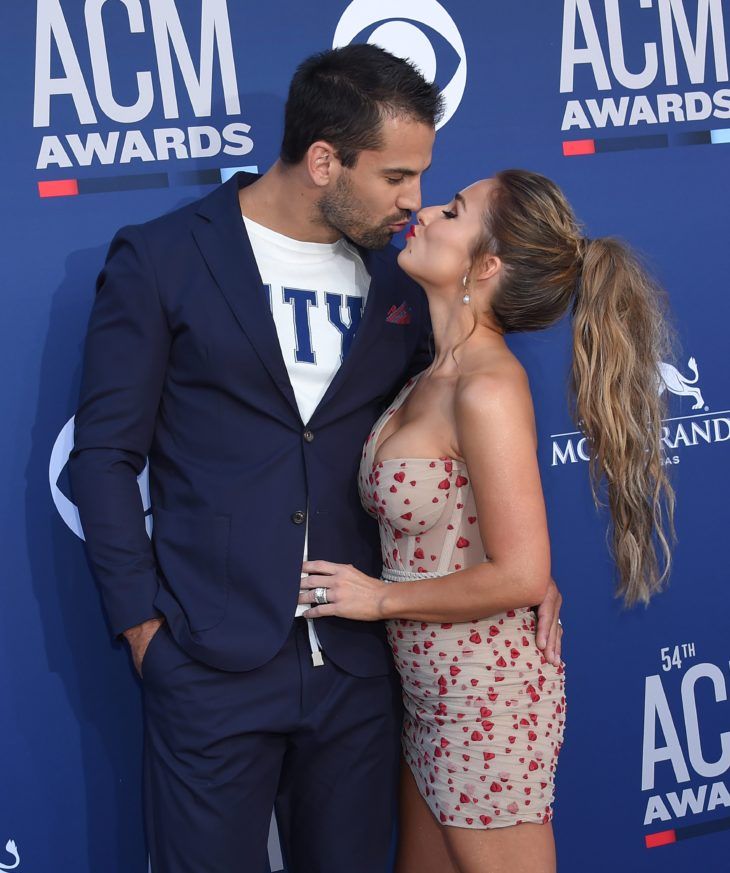 After their gorgeous June wedding, many wondered when the stunning pair would start thinking about having kids, and they didn’t have to wonder too long. In late September, 2013, the pair took to Twitter to announce they were expecting their first child. “It was a surprise at first, it wasn’t planned. But when we did find out, we both started crying and hugging each other,” she said of expecting their first bundle of joy. Since they weren’t planning the pregnancy, the two were pretty surprised when they found out especially because they were doing press in LA earlier and were being asked all kinds of questions about babies and said, “Nah, we’re gonna wait.” “And I get back and I take this test and I’m like, “Well, I’m pregnant!” It’s so funny because when I look back on that LA trip I didn’t drink. And I’m not a big drinker at all but I’ll have a glass of wine and I was just, “Eh, I’m not feelin’ it.” It must’ve been a little sign from God to hold off. Whenever I took (the test) Eric and I were cooking in the kitchen and I just had to go to the bathroom and I saw the box with the test on the counter, because I always think I’m pregnant. I took it and it was positive. I ran out and showed it to him and he didn’t believe me. So I had to do it again in front of him and then he believed me!” Jessie revealed in an interview. On March 18, 2014 the two welcomed their first child, daughter Vivianne Rose Decker, and the following year they welcomed their second child, son Eric Thomas Decker II, on September 3, 2015. 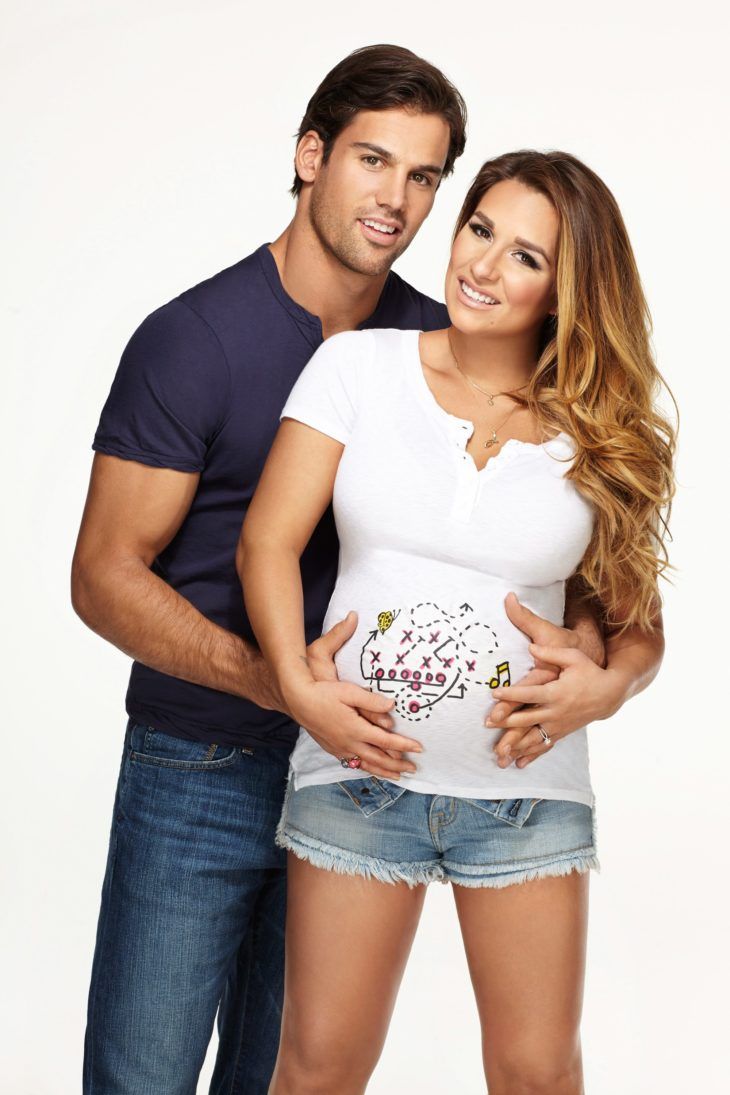 It didn’t take long for Eric and Jessie to become a Hollywood power couple, and the fact they were absolutely adorable and stunning together lead to the inevitable: their own reality show on E! called Eric & Jessie: Game On. While both were excited about the show and shared many big moments with fans including getting married and welcoming their first baby in the first two seasons, it certainly wasn’t easy adjusting to reality star life. A month before their show even aired, Jessie tweeted and then deleted, “Way too many people stopping in front of our home and taking pics. I appreciate the excitement but its also disrespectful. We are moving now.” Meanwhile, as a then player with the Denver Broncos, Eric was receiving criticism for focusing on becoming a reality star instead of football, causing him to release a statement reading, “Nothing will deter me from my football career. I have priorities & I have the same common goal as my teammates to win championships.” 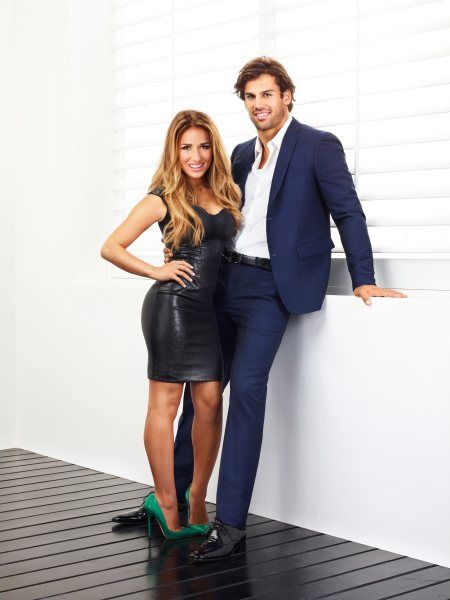 In the summer of 2017, Eric and Jessie James announced that Eric & Jessie was returning after a three year hiatus after many assumed the show had simply ended. In 2016, Jessie actually explained their decision to not continue the show immediately after the second season, stating, “Never say never, but I just don’t know how comfortable we are with having a camera crew around our children,” she said. “The great thing about Instagram and Twitter and all that, is we’re in control of what we want to put out there.” She added she was worried it would be a negative experience for her kids. “What if a kid’s in a bad mood or tired, and they’re supposed to be in this scene? I just don’t like all of that.” Now that the pair have announced season three will air in September 2017, she said “Well, now it’s been almost four years since the show. My kids are so smart, they’re so adaptable to the situation,” adding, “I think the positive thing coming into doing a season 3 was I’m one of the executive producers, and I have a lot of creative control and say. I get to be more protective of my children. So they’re the first priority. Anything that’s gong to harm them or not be good for them, I’ll never allow it.”

Wanna see a preview of our show????? We’re back for a new season of @ericandjessie premiering Wednesday, September 6th at 10/9c on E!

To most it seems as though there is no way that Jessie James and Eric Decker actually have the perfect relationship that they put out there on their show and on social media, but it is not just a facade. “I would never, ever settle. That is my biggest thing and I always say it,” Jessie said of her love advice for people who envy her romance with Eric. “I’ve seen so many friends of mine who are on the verge of divorce now because they just got married like, ‘Well, he’ll do.’ You will end up in divorce. You need to marry someone that is your soul mate, that you’re obsessed with, and never ignore that. People make fun of me all the time time. They’re like, ‘Not everything’s gonna be perfect,’ well it is in my world. And it should be. Because you deserve it.” 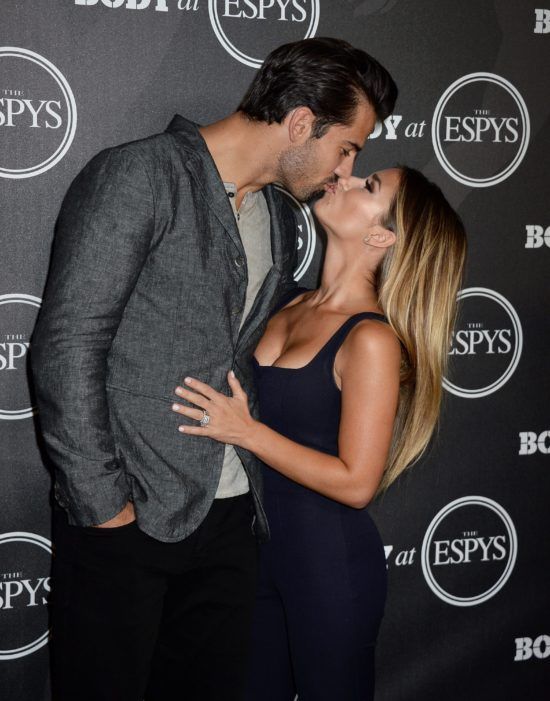 As most fans know, “reality TV” doesn’t always portray reality and while the shows aren’t scripted, producers look for ways to manipulate situations or take things out of context to make things more dramatic, but that is one thing the couple were not going to stand for with their show. When producers tried create drama that wasn’t there on Eric & Jessie, the pair had them fired! “There were a few different producers who were looking for ways to create more drama in our relationship so they had to go. Eric and I just don’t have drama. We’re very happy. So I remember having a little bit of a struggle in the beginning and having a conversation with the network, like, ‘Hey, you’re digging for something that does not exist and you’re going to make us not want to do this real quick.’ So we got ride of those people and brought in the people who really did understand us. I wanted to keep it fun! I felt like drama wasn’t necessary for us to create an entertaining show.” 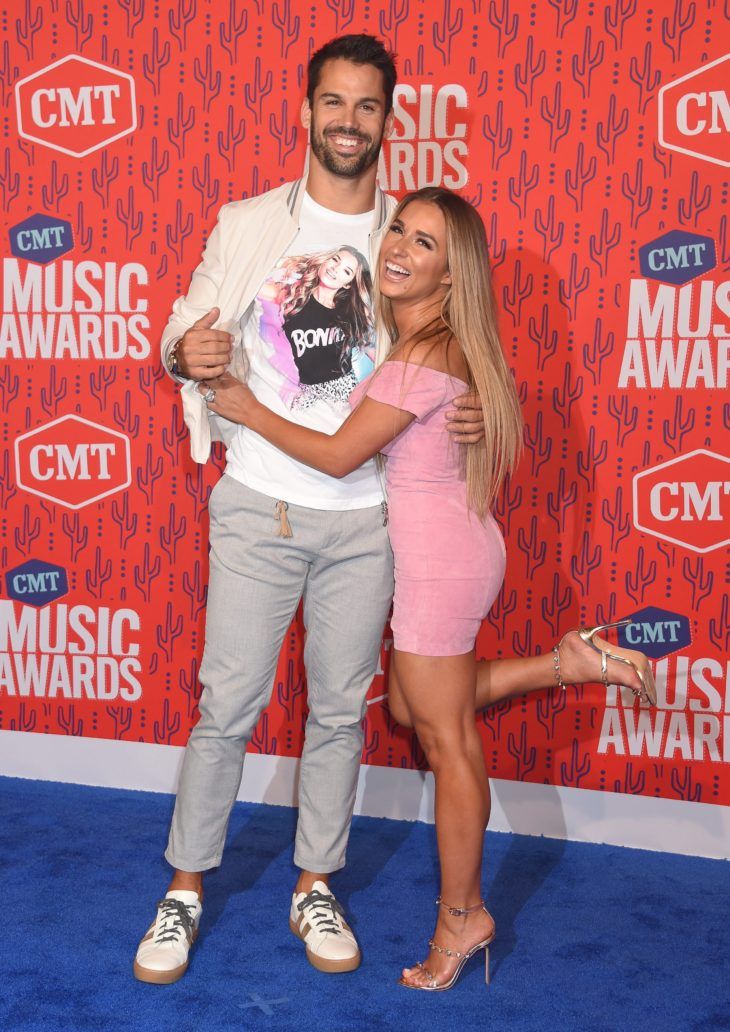