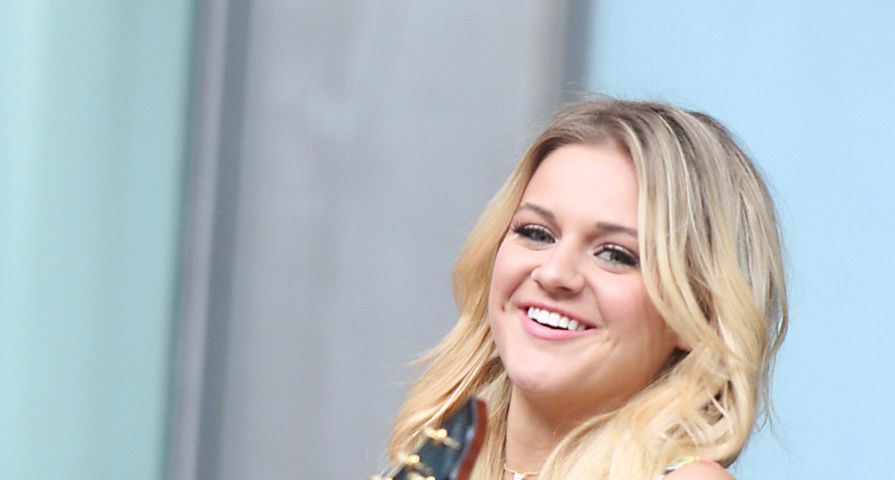 Country singer Kelsea Ballerini has experienced a whirlwind rise to success ever since she released her debut album The First Time back in 2015. She’s blown audiences and critics away by charting three No. 1 singles, “Love Me Like You Mean It,” “Peter Pan,” “Dibs” and a Top 10 single, “Yeah Boy,” all from one album! She was even nominated for a Grammy as Best New Artist in 2017! Fans are super excited to see where her career will go from here, so here’s a look at 10 things you probably didn’t know about the new country star!

Kelsea Ballerini was groomed by her producer, Forest Glen Whitehead, to be a “country Beyonce.” One of the reasons he knew this was possible with Ballerini was because she not only was an incredible singer and songwriter with just the right amount of edge, she’s also a dancer! She did 10 years of dance: “I did ballet, jazz and all that, but I think hip-hop is really where I learned rhythm and groove, which has helped me in music.”

The 23-year-old Southern belle wrote her first song when she was only 12-years-old. It was titled “Oh Mama” and was a last minute gift for her mother on Mother’s Day. This upcoming star has been set on becoming a country artist ever since. In an interview with Taste of Country, she said, “I had this conviction when I was 14 years old that I was going to be a country music artist. That’s all I really wanted to do, and I didn’t really care to do the normal type of stuff. I was very dead set on doing this,” said Ballerini. She welded her craft by performing at church and school functions and began writing melodies and songs in a Garageband with a friend who’d play piano.

When she learned guitar she began traveling to Nashville every month with her mom to play for industry insiders. “I would sit there and clunk on my guitar that I could not even play and sing these songs that were terrible at the time, and people were telling us, ‘If you really want to do this, come to Nashville and do it every day. It wasn’t just a hobby; it was something that I was very, very serious about, and I think [my mother] saw that,” she said. When she was 15, she convinced her mother to up and move to Nashville because she had decided to “really go for it.”

After her big move to Nashville, Ballerini began studying country music videos and channels. She was determined to become the next breakthrough female artist. Before she made it big, she pursued an education by attending Nashville’s Lipscomb University for two years. She signed her first record deal during her sophomore year when she was only 19-years-old to the independent label Black River. Her manager Fletcher Foster knew she’d be a star: “She just sparked. I was just blown away, not only by how she reacted onstage, but after that, just the one-on-one reaction that she had with the fans, and particularly the girls that would come up there…It was just magical, and that’s when I knew I was in,” he said.

Kelsea Ballerini has received a lot of support in the country music genre, and one of her biggest supporters has been Hillary Scott of Lady Antebellum. Ballerini said Scott told her, “I just feel called to be a mentor to you.” When Ballerini got her first No. 1 single, “Love Me Like You Mean It,” Scott bought her a gold necklace and told her it would be her golden ticket. “She’s amazing. I know I can call her at any point,” said Ballerini in an interview with Rolling Stone. She’s also close friends with Taylor Swift, who invited her onstage to perform with her during her 1989 tour!

Ballerini said she got the idea of one of her biggest hit songs, “Dibs,” from reading a teen magazine. She was reading an issue of Seventeen when she saw the word. “I thought it was super cute, so I put [the word] in my song idea list on my phone.”

She’s engaged to Australian singer-songwriter Morgan Evans. Her beau popped the question back in December 2016 on Christmas morning after a short but whirlwind 9-month courtship. They first met while hosting the CMC Awards in Brisbane, Australia, in March 2015. “I was anti-love, [anti-] dudes, [anti-] thinking about futures before him. I always remember people telling me, ‘When you know, you know.’ And I was like, ‘What do you mean? That makes no sense to me.’ And then, for real, within weeks, I was like, ‘Whenever. Yeah, I’m in,'” she said. Fans can expect to see a collaboration between the two on her upcoming album!

Similar to other artists, Kelsea Ballerini has said that her onstage persona is much different than the person she is in ‘real life.’ “I always thought, ‘Man, I’m going to be the same off and onstage.’ Onstage I love big production and I love sparkles. But it’s a lot more dramatic than I am in real life. It’s different brains. It’s weird. If you’re a songwriter-artist I really feel like when you’re in artist mode you’re all happy and showy but when I’m a songwriter I like to just be in my sweatpants,” she said in an interview with GQ.

2. Her Dog is Named After This No. 1 Hit Single

To celebrate the release of her first album and her second No. 1 single she got a puppy and named him Dibs! Sadly, Ballerini had to ban her cute pup from the road bus for the time being. “He’s with my mom for a little bit because he’s out of control and he’s huge and my bus has twelve people on it, and he’s enough for two people. So she’s training him right now. But he’s so scruffy and adorable and just the cutest,” said Ballerini.

Through all the success, Ballerini has made a point to remain true to herself and as real and genuine as possible. “I really want the same person that people see onstage to be the same person that goes out to dinner in Nashville, or the same person that grocery shops, or takes pictures with my dog at home. I just want there to be a consistency and realness there,” she said. “Before we even started everything, I went and got a tattoo, and posted a picture with a glass of wine, because I was like, ‘I need people right now, up front, to know that I try to be a good person and I love Jesus, but I have a tattoo and drink wine.’ I just need that to be out there, because I don’t want to disappoint anyone. It’s really important for me to be real, consistently, as a person, an artist and a songwriter.”