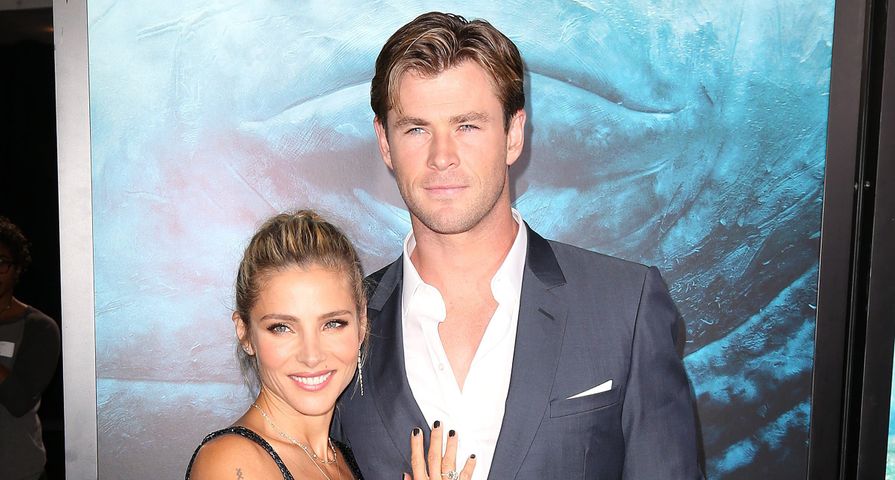 Chris Hemsworth exploded into Hollywood stardom seemingly overnight, and fans sure are glad he did. He is talented, funny, down-to-earth and ridiculously handsome, and if that wasn’t enough, he is also one of the industry’s sweetest and most devoted family men. Hemsworth and wife Elsa Pataky both may have busy careers, but first and foremost is their relationship and their family which they try to keep as private as possible. We’ve gathered up the bits and pieces they’ve spilled about their amazing lives together, and put it all here so fans can find out so much more about the gorgeous couple!

Chris Hemsworth and Elsa Pataky did not have one of those “caught eyes across the room” moments. Instead, the then 27-year-old Chris was introduced to the then 34-year-old Elsa by talent agent William Ward at a business function in early 2010. “There was no light bulb moment,” Hemsworth said of the start of his relationship with his wife. “From the first time we met, we just made sense. She’s fun. She’s outgoing, and she has a sense of humor and a passionate attitude toward life, which is nice to try and keep up with.”

Many fans had just begun having a major crush on Chris Hemsworth when they were devastated by the news he was married! It happened so fast, no one could keep up! After meeting in early 2010, the pair were married only months later in December 2010. Pataky became pregnant with their first child in the fall of 2011 and they welcomed daughter India Rose in May 2012. She then became pregnant with their twin sons in the summer of 2013 and they welcomed Tristan and Sasha in March 2014.

Although it took no time at all for Hemsworth and Pataky to fall in love, the pair had both had some serious relationships that didn’t work out before. Back in 2004, Pataky was dating French actor Michael Youn and they even became engaged but called it quits in early 2006. Later in 2006, Pataky began dating actor Adrien Brody and in 2007 he even bought her a 19th-century estate in New York, and things were serious between the pair until they abruptly split in 2009. Meanwhile, Hemsworth’s biggest known relationship was with fellow Australian and former Home and Away co-star Isabel Lucas. The pair were reunited in 2011 for the filming of Red Dawn, but by then Hemsworth was already happily married to Pataky.

Movie fans are well aware of Chris Hemsworth’s status as one of Hollywood’s most sought-after leading men and, thanks to his role as Thor, he has been earning quite the considerable payday. Meanwhile, Elsa Pataky is lesser known to North American audiences, but she is a well known Spanish model, actress and producer, but has recently become more well known with her role as Elena in the past three Fast & Furious films, and has her own millions to add to the marriage. Together, the pair is worth an incredible $70 million!

While Chris is Australian, Elsa is Spanish and is also fluent in English, Romanian, Italian, and French! Her multilingual skills are being taught to their children and although Chris is trying to learn Spanish, he doesn’t have a full grasp of it yet. In an interview in 2015, Hemsworth revealed that when she gets angry, Pataky resorts to speaking in Spanish. “My Spanish is horrible so I can’t understand when she’s angry with me. But I’ve learned a very important phrase, which helps calm things down – ‘Si, mi amore’ (yes my love).” Then, with Ellen DeGeneres, he shared a hilarious story about his daughter India being bilingual. “My daughter is bilingual. It’s amazing. Like, you walk in the room and if someone is not authentically speaking Spanish, she just won’t even have it. She’s like, ‘Nah,’ and goes back to English. Even if my mom or someone even attempts to speak in Spanish, she’s like, ‘That’s horrible. You’re butchering the language. Get out,'” the proud dad joked. He also hilariously revealed, however, that while she speaks perfect Spanish, she does so with an Australian accent which she got from her dad of course.

Since the two were married in the same year they met, it probably isn’t too surprising that not a whole lot of planning, if any, went into their December 2010 nuptials while in Indonesia over the Christmas holidays. “There was no great plan to any of it to be honest, we were on holiday and we said ‘why don’t we get married too?’ There probably should have been some planning but it all worked out. Honestly, we had both our families on holiday at the same time, just randomly, and we said this is a good opportunity with everyone together so we just did it,” Hemsworth dished about the big day. It also seems there was so little fuss about the wedding that they aren’t quite sure what day their anniversary is. In 2013, Hemsworth admitted that he and his wife couldn’t agree on the exact date they got married. “There’s a bit of a dispute… So yeah, the answer about the date of my wedding: somewhere in December.”

Fans of Chris Hemsworth are well aware that fame and fortune have not made him a different person, or a stranger to his family and he often talks about remaining close to his brothers, Luke and Liam. Following Liam’s split from Miley Cyrus in 2013, there were many reports that his family didn’t like her and Chris had been a factor in telling his brother the relationship wasn’t good. Chris then fueled the fire even further when he stated in an interview in 2014, “I’ve watched Liam do things I did at his age, like being in relationships he shouldn’t be in,” making many assume he was talking about Miley. This made it all the more surprising when Liam and Miley started getting back together and one of the first things they did was go to Australia and hang out with Liam’s family where none other than Elsa Pataky gave Miley the stamp of approval, and in fact, they got matching tattoos. Seems Elsa was a driving force in ingratiating Miley back into the Hemsworth family.

While Hemsworth’s career in Hollywood was beginning its rise, he and his young family lived in Los Angeles, and after his career reached the point where he no longer needed to live in L.A. to secure work, Hemsworth made it quite clear he was not a fan of the lifestyle of the city. “L.A. is a tough place to get around with kids. There’s not a whole lot of foot traffic. It was all about loading up the car and car seats. Here [Australia], we just walk out the door and head to the beach down the street. It’s a much more simple life.” He added, “We were living shoulder to shoulder in the suburbs and thought that’s not how we want our kids to grow up. Moving to a kind of farm setup back here on the coast in Australia has been the best thing.” He added that the paparazzi had a hugely negative effect on him and his family. “We’d leave the house and there would be six paparazzi out in front. In L.A., more than anywhere else in the world, paparazzi are everywhere, 24/7. We felt suffocated. The agitation you feel from the paparazzi rippled in the house.” Now, Chris and Elsa and the kids live in a “quiet little surf town” called Byron Bay where they purchased a $7.2 million mansion.

Despite his huge level of success, it seems Chris Hemsworth never got sucked into the “Hollywood life” and neither did his wife, which he credits to his family. “I can say that [my family] has certainly kept my feet planted firmly on the ground – I’ve been able to bypass a whole lot of garbage, traps that I could have fallen into. I had a taste of it when I was younger and on a TV show in Australia, and it wasn’t of great interest to me even then.”

Many fans don’t realize it, but Chris and Elsa have spent some on-screen time together. For 2013’s Thor: The Dark World, the passionate kiss at the end of the film between Thor and Jane Foster is not between Chris Hemsworth and his on-screen love interest Natalie Portman, but actually between Chris and Elsa. “He was working in Hong Kong and I couldn’t get there because I was working on my own film. So they put his wife in my wig and costume. That’s why it was so passionate,” Portman revealed of the kiss.