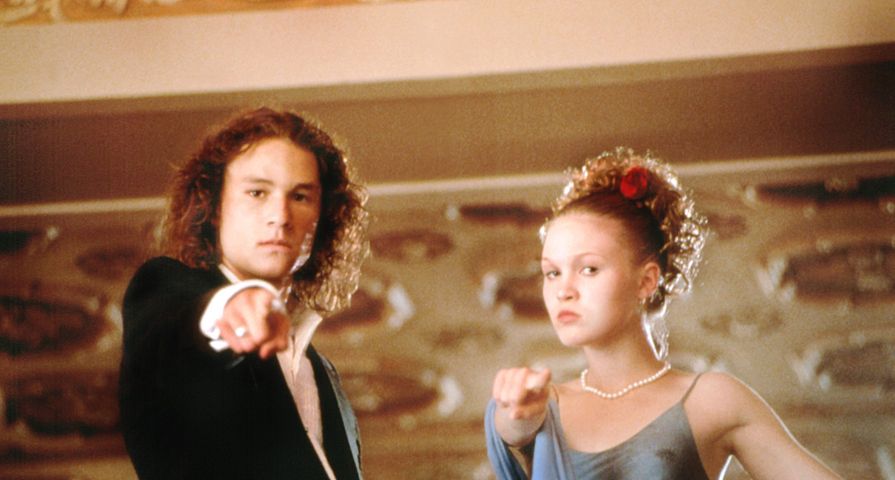 Some films stay with fans forever, and it is safe to say that 1999’s 10 Things I Hate About You is one of them. Despite being a teen film, it was so much more than that, with a witty, intelligent script and a perfect cast to pull it off, making it one of those movies that fans turn back to even 17 years later. As the years have gone on, the director, screenwriters and the cast have spilled secrets here and there about filming and working together, leaving us with these 10 things we never knew about 10 Things I Hate About You.

The music is one of the best parts of 10 Things I Hate About You, and the band, Letters to Cleo, makes a couple of appearances. Aside from the prom scene, their most notable performance is at the end credits where they are performing precariously on the roof of the school, and according to lead singer Kay Hanley, it was really terrifying. “So they told us, ‘This is a helicopter shot, and it costs $500,000 every time the helicopter has to take off, so don’t f–k this up!’ As we started playing we saw the helicopter appear off in the distance. It’s hard to say how far away it was at first, because we were so high up in the air. But then all of a sudden the helicopter does this dive bomb directly toward us! Is the helicopter out of control? Is it supposed to be coming at us like this? And I’m thinking, ‘Don’t f–k up. keep singing the song, don’t f–k up, it costs 500 grand every time the copter takes off.’ It was unbelievably scary-but it turned out to be such an amazing shot.”

Despite the fact that the film is based off of the famed William Shakespeare play “The Taming of the Shrew,” one of the film’s most used taglines had nothing to do with Shakespeare. The tagline used was, “How do I loathe thee? Let me count the ways,” which is a play on the famous line, “How do I love thee? Let me count the ways.” That line is actually the first line of Sonnet 43 from Elizabeth Barrett Browning’s “Sonnets from the Portuguese.”

In a Q&A with screenwriters for the film, Karen McCullah revealed how the movie got its title. “The title is based on a diary entry I made in high school. I had a boyfriend named Anthony that I was frequently unhappy with. I made a list called Things I Hate About Anthony. When Kirsten [Smith] and I decided to write this, I went through all of my high school diaries to bone up on the angsty memories, and when I told her about that list, she was like, ‘That’s our title.'” Despite the inspiration, she also added that Anthony liked the movie. “Anthony is very proud of that fact. We’re still friends today. And every now and then I’ll get a random phone call in the middle of the night: ‘My nephew doesn’t believe that this title is about me. Tell him.’ On the phone, I’m like, ‘Yes, I hated Anthony in high school.'” The title was also received well for the film because “10 Things I Hate About You” sounds remotely like “Taming of the Shrew.”

Of course, the whole point of the title comes clear in the movie near the end when Kat Stratford reads her “10 Things” poem. It is one of the movie’s best scenes and in the extras on the DVD it was revealed that Kat’s tears were not a part of the script. Julia Stiles crying was her own reaction and as a result they only shot the one take of the scene that ended up in the movie.

No sets were used for filming the movie, and everything was on location, namely at Stadium High School in Tacoma, Washington. Unfortunately after the film makers approached the school to provide their marching band for the scene where Patrick Verona sings to Kat Stratford, they were informed that the school didn’t actually have a marching band. Filmmakers then had to contact a different local school to send over their marching band. Although they included many of the Stadium High School band members, they just had to be taught how to march.

In 2015, 16 years after the film’s release, David Krumholtz, who starred as Michael in the film, gave fans an insight how well the cast worked together on 10 Things I Hate About You in a piece he wrote for Vulture. Krumholtz described how on their very first night of filming they all came together at the hotel’s restaurant for a “kickoff dinner” and immediately became friends. “Work was fun, and after work we were inseparable. We laughed, we partied, we rapped. Joseph Gordon-Levitt turned me on to Phish, and I turned him on to Wu-Tang. Gabrielle Union had us in stitches, Julia Stiles brought her own brand of Soho-bred artistic intellectualism (at only 17, mind you), Larisa Oleynik’s laughter filled the room, and we marveled at the tonedness of Andrew Keegan’s muscles (a great sport!).”

In his piece for Vulture, Krumholtz also revealed that while the cast began filming together and getting to know one another for a week, Heath Ledger wasn’t there. “We had only heard stories from the producers about the disarming charisma of a handsome Aussie from Perth with an infectious smile, who was busy completing his work on an Australian TV series called Roar. By the end of week one, we had all established such strong friendships that we worried about how someone named Heath could possibly manage to find his place in our inner circle.” Of course, it didn’t take long for Heath’s charm to win them all over as Krumholtz added, “The group, with Heath, only got stronger […] it was Heath — a natural storyteller, and always reliable for a cheesy joke — who transfixed us.” Coming off of his time on Roar, 10 Things I Hate About You was Ledger’s first American movie role and director Gil Junger stated there was “concern” over his Australian accent which they decided not to hide, but Junger said it made the character “dangerous and sexy.” Of course, there was a chance the movie wouldn’t star Ledger at all as he had to beat out both Josh Hartnett and Ashton Kutcher for the role of Patrick.

Fans absolutely adore when on-set romances follow the stars off-screen, and since Patick and Kat were one of the late ’90s and early 2000’s favorite movie couples, fans were stunned to learn years later that Heath Ledger and Julia Stiles did fall in love on set. For the 10th Anniversary of the film, the cast came together for a new commentary where they revealed that the pair began dating during filming, but broke up in January 2000.

It seems that Larisa Oleynik and Julia Stiles were the perfect fit for playing sisters Bianca and Kat Stratford, but at first Stiles wanted the role of Bianca, and Oleynik wanted the role of Kat. Meanwhile, despite the fact that Stiles portrays Oleynik’s older sister by two years, she is really only three months older than her. Their stories crossed again with the plot line that Kat Stratford is very excited she got into Sarah Lawrence College, and in reality, Oleynik went to Sarah Lawrence College.

1. Save the Last Dance

As the breakout movie for a lot of the film’s young cast, one scene in particular was extremely important for one of Julia Stiles’ other iconic roles. In an interview in 2014, Stiles revealed that her infamous table dancing scene from Bogie Lowenstein’s party is what led to her landing the leading role in the hit film Save the Last Dance. She was asked how many takes it took for her to nail the table dancing, and she said, “It was like 15 years ago, I don’t really remember! I think like once or twice. That’s how I got the job in Save the Last Dance by the way; I think it was from that scene. That’s what I was told.”