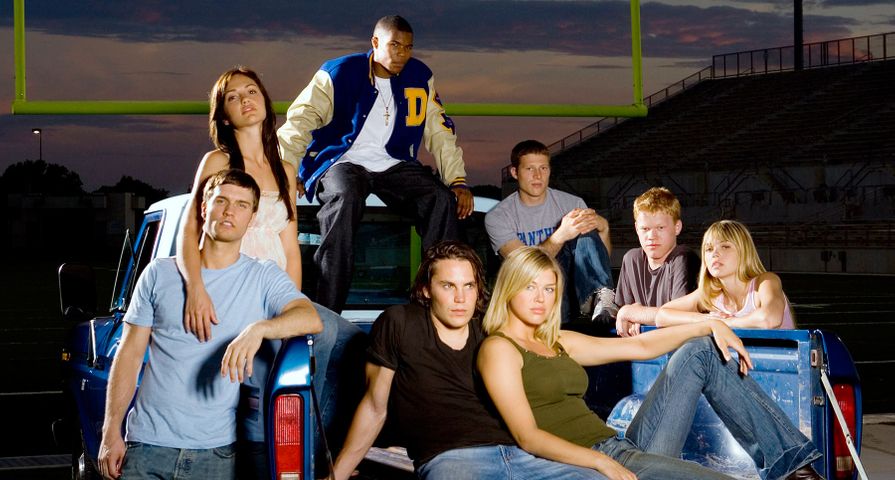 When it comes to really good teen drama television, it’s safe to say Friday Night Lights did not get the credit it deserved. The show ran for only 5 seasons from 2006-2011 but its short-lived run didn’t make us love it any less. Unlike most series similar to it, Friday Night Lights spawned off a movie and not only was it at least as good as the film, it was arguably better and drew in fans even if they didn’t like football which was the central premise of the show. Sure we don’t miss Julie but we miss basically everything else about the show from the storylines to the characters and the all-around excitement it gave us for five amazing seasons.

Kyle Chandler and Connie Britton may be the most perfect fictional couple ever. Sure we miss Coach Eric Taylor and his wife Tami Taylor separately, but together they were absolutely the best. Somehow we couldn’t decide if we were attracted to Coach or if we loved him in the “I wish he was my dad” way and we definitely wanted Tami to be our mom or at least our best friend. Just one of the many reasons why FNL wasn’t “just another teen show” is because we were most definitely just as concerned about the lives and relationship of these two adult characters. How in the world this wonderful couple ended up with the most annoying daughter in TV history we will never know, but we miss them all the same.

The East Dillon Lions!? Are you serious Coach Taylor? We just spent 3 seasons supporting you through the ups and downs of our favorite group of highschool players ever–the Dillon Panthers, and then you jump ship to coach the East Dillon Lions!? Yes, initially we couldn’t believe that we were no longer apart of the Panthers life but somehow we ended up loving the Lions just as much. Luke Cafferty (Matt Lauria), Vince Howard (Michael B. Jordan), Jess Merriweather (Jurnee Smollet-Bell) and Becky Sproles (Dora Madison Burge) had us all rooting for the Lions in no time. Not to mention it didn’t hurt that Tim Riggins teamed up with Coach Taylor to help guide the new team and it was easy to hate the Panthers with the insufferable J.D. McCoy (Jeremy Sumpter) as the quarterback. Of course we’re going to miss the original group but the show was so good, we ended up missing the new cast just as much.

Bad-a– female leads have never been better than Tyra Collette expertly portrayed by Adrianne Palicki. At first you’re pretty sure you don’t like Tyra (but that may be because she gets to be with Tim Riggins) but without a doubt, her character goes through one of the best developments, quickly turning her into a favorite. Even though she is a bit brash, she is the perfect counter to Lyla Garrity’s sickeningly sweet and innocent character. Tyra is confident, smart, beautiful and sarcastic making for some awesome interactions and lines developed for the character and she also goes through some of the most intense situations in the show. We may never forgive her for breaking poor Landry’s heart, but when they were together it was great, although the show ending on a reunion between Tyra and Tim couldn’t have been any more perfect.

Landry Clarke (Jesse Plemons), much like Tyra, develops into a character with way more depth than expected in the first few episodes, which is just another reason FNL is a superior show. As Matt Saracen’s best friend, Landry offers up the comedic relief to the endlessly serious and brooding Saracen and even acts as a source of humor for other characters such as Coach Taylor insisting on calling him “Lance”. As fans know there was a whole lot more to Landry however as he winds up killing a man trying to attack Tyra and does everything he can to protect her from being involved as he tries to cover it up. He is also left waiting for Tyra on the side of the road after they try to make a long distance relationship work, but through it all he keeps his positive outlook and witty remarks. We miss Landry and we even miss his Christian death metal band Crucifictorious, even though they weren’t very good. Just in case you forgot Landry’s epic first lines in the first episodes were, “I think I’m going to get me one of those signs that says, ‘Landry Clarke. Utterly Useless. All State Jerk Team.'”

A LOT went on off of the football field, but the show always kept its central focus and the best part was, that didn’t mean you had to be a football fan to appreciate the show. High school football is a big deal in a lot of small towns and while FNL‘s depicition of the craziness surrounding a high-school team may seem dramatic, it really isn’t that far fetched. The character’s often brought their off-field issues to the game either making them play better or worse but ultimately teaching them a lesson thanks to Coach Taylor. The first episode may have seen the end of star quarterback Jason Street’s career, but it also added the element of players adapting to life without the sport while also showing the success it can bring with Smash Williams earning himself a college scholarship. Getting to know the characters and then watching them play in big games made us get excited, cheer for them and revel in their victory like it was a real life game.

One of the many great things about Friday Night Lights was it was not all focused on the teenager’s relationships. We got invested in the relationship between Coach Eric and Tami Taylor, between Lyla and her father Buddy Garrity, Billy Riggins and his wife Mindy, and of course Billy and Tim Riggins as brothers. Of course there were dynamic friendships, Tim and Jason, Matt and Landry, Luke and Vince but even the teen love stories felt more real than most TV dramas, including the surprise pregnancy between Luke and Becky and the on-again, off-again between Julie and Matt. Five seasons may have seemed like not long enough but emotions were not in short supply as fans were taken on a wild ride as characters fell in and out of love and went through major changes. All we could do is sit and watch and hope Tim Riggins takes his shirt off.

Audiences were thrown for a loop right off the bat when introduced to star quarterback Jason Street (Scott Porter) who was touted and made a big deal of for the entire Pilot episode only to have his football career end in the very first game of the Panther’s season. Street’s injury was shocking, terrifying and above all confusing as we realized this show wasn’t going to be about him after all and we instead learned about his character learning to live in a wheelchair, after previously being the number one highschool QB in the nation. Watching Street’s heart and courage as he dealt with the accident, his girlfriend leaving him for his best friend and trying to make himself a career in the sports world off of the field made him one of the most interesting character’s and the figure around which we knew this wasn’t going to be like any other teen drama show.

After Jason Street’s shocking injury, Matt Saracen (Zach Gilford) became the unlikely new star of the Dillon Panther’s football team. Not only was it unlikely because behind a player like Street, Saracen wasn’t actually expected to play, but also because he had a lot more to deal with than just football. His relationship with his grandmother was one of the sweetest things on television as he took care of her after she raised him when his mother left him and his father went to the army. Instead of playing the typical jock, Saracen had many emotional scenes and the episode “The Son” definitely should have earned Gilford at least some sort of award nomination. We love Saracen and we miss him, but we still cannot figure out his obsession with Julie. He could have done much, much better.

“Clear Eyes. Full Hearts. Can’t Lose.” This line was so poignant with fans, many had it tattooed on their bodies because watching Coach Taylor’s pep talks were inspiring to all of us, not just the football players he was trying to motivate. “Every man, at some point in his life, is gonna lose a battle. He is gonna fight and he is gonna lose. But what makes him a man is that, in the midst of that battle, he does not lose himself.” If that doesn’t make you want to suit up and win a football game for that man I don’t know what will. His words of wisdom weren’t limited to only the locker room either. Eric Taylor had the best advice and common sense for everybody at any time making us wish he was still there to guide us through adversity.

It’s obvious there are a lot of reasons to miss Friday Night Lights but the number one reason that makes us miss it the most is that it introduced us to Taylor Kitsch as Tim Riggins. Riggins was the best character on the show no matter what he was doing. We loved Riggins when he was being a typical high-school boy who just liked to drink beer and chase girls but we also loved him when he showed his sweet side when he was when in love with Lyla or helping out Julie. Riggins was a misunderstood “bad boy” with a big heart and a smile that could make you melt. He was a great and loyal friend and his loyalty to his friends and Texas was endearing. What we really want to know is if he finished that house he was building and moved in with Tyra? Texas Forever.