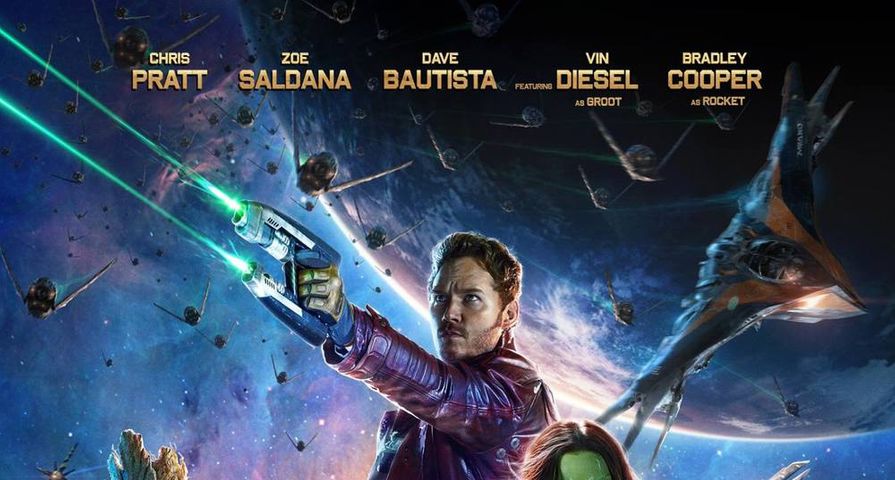 Disney/Marvel’s Guardians of the Galaxy is a $170 million film based on an obscure comic book that the majority of its audience will have never heard of, let alone read.  That statement makes Guardians sound like an incredibly risky film and in many ways, it is. There was no guarantee that this movie would work, and Marvel took a big chance on their brand being recognizable enough to help sell the film to skeptical audiences. As is now abundantly clear, the gamble paid off. The film broke box office records for the month of August (which is traditionally the slowest month of the summer for ticket sales), received almost universal critical acclaim, and has a confirmed sequel on the way in 2017. What makes this success all the more significant is that Guardians of the Galaxy is the best movie of the summer. Here are 10 reasons why.

The success of Guardians of the Galaxy can be largely attributed to its connection to the Marvel Cinematic Universe, which to Disney/Marvel’s credit, has been made very clear in its advertising campaign. However, while GotG is linked to films like The Avengers and Iron Man, it is pretty much allowed to be its own thing.  Guardians is an ensemble team-up movie in the same vein as The Avengers, yet its much more comedic tone distances itself from the rest of the Marvel movies. It also takes place in an area of the universe that is very distant from the stories of the other films, which means its characters are allowed to do their own thing. With the announcement that Guardians of the Galaxy 2 will be released in 2017, it’s clear that a new high-profile film franchise has been born.

In pretty much every way, Guardians of the Galaxy was a gamble for Marvel. It’s a film based on D-list superheroes with few bankable stars and an absolutely bizarre tone and concept to match. Everything about Guardians is risky and that’s one reason why it is so great. Marvel’s biggest gamble was hiring James Gunn to direct, as he is not a well-known director and specializes in weird cult films like Slither and Super. Hiring Gunn was a brilliant move, as his off-kilter tone fits in perfectly with the strange nature of the subject matter. The film is also not afraid of embracing its strangeness, placing it front and center for all to see. This could have made for a film that is all over the place in terms of its tone, but Guardians strikes the right balance between being weird and relatable.

Up to this point, Marvel has consistently made great casting decisions in their movies (even if his shtick has become a bit tiring, Robert Downey Jr.’s turn as Iron Man was a revelation). Guardians follows suit with some interesting casting decisions of its own. Surprisingly, it’s not leading man Chris Pratt as Star-Lord or Bradley Cooper’s Rocket Raccoon that are the biggest standout (although they get ridiculously close). Wrestler Dave Bautista turns in an absolutely stellar performance as Drax the Destroyer, a tough-as-nails brawler with a tortured past. Bautista exudes charisma in the role, turning what could have been a boring, one-note character with a revenge complex into a loner who really just wants some friends to fill the void in his life (it also helps that his lines are often hilarious). Out of all the Guardians, the film’s trailers place the least emphasis on Drax, but he may very well end up being the standout favorite.

As much as Guardians is an ensemble film, Chris Pratt’s Peter Quill, aka Star-Lord, still takes center stage. As the only character from Earth, he is the audience’s surrogate into the foreign galaxy that the film introduces. It is appropriate then that Quill’s mixtape of music, which is one of the only possessions he leaves Earth with at the beginning of the film, would comprise the majority of the film’s soundtrack. The song selection is inspired, as it pulls from many recognizable pop songs of the 70s and 80s. Not only are chosen songs great, but they help form a soundscape for the film that helps ease viewers into the film’s universe, which is already a tough sell on its own.

Guardians of the Galaxy is an action-packed science fiction film, but it’s also one of the funniest films of the year. As already mentioned, Marvel had a tough sell to make with the film– it’s such a ridiculous concept that if it didn’t deliver the right tone, it could have fallen flat. Fortunately, James Gunn and Co. were confident enough to poke fun at the craziness of the subject matter, resulting in a film where the punchlines are seemingly endless. From the wise-cracking Star-Lord and Rocket Raccoon to the completely literal Drax who doesn’t understand figures of speech, the humor on display hits every spectrum, resulting in a film that would be difficult for anyone to not find funny.

It’s hard to deny that, in many ways, Guardians of the Galaxy is the best “Star Wars” movie in decades. The original 1977 film inspired an entire generation of filmmakers and captured the imaginations of millions of kids. It’s unlikely that Guardians will have as large of an impact, but there’s no other film in recent memory that is as close to being a spiritual successor to Star Wars.  The similarities are rather striking: Both films are “space operas”, which are sci-fi films that place emphasis on storytelling over realism. They also both depict a ragtag group of rebels taking on a larger force commanded by a powerful, dark figure. If Guardians can inspire a whole new generation of future filmmakers, imaginative entertainment at the movies will be alive and well for generations to come.

The trailers for Guardians of the Galaxy depict a film full of irreverent humor and explosive action – essentially, a typical summer blockbuster. What many viewers surely did not expect were poignant moments of humanity; after all, this is a film with a talking raccoon and bipedal tree. Right off the bat though, GotG aims for the heartstrings with a touching scene between a young Peter Quill, aka Star-Lord, and his dying mother that truly upends expectations.  Moments such as these bring just enough emotional weight to the proceedings to make a story about an intergalactic band of misfits featuring a sentient tree worth getting invested in.

One criticism that can be leveled at the film is that it is so fast-paced and busy in terms of world-building and plot set-up that it doesn’t devote enough time to fleshing out the characters. This is a real shame because the characters are so great that it ends up being a downer that more details of their backgrounds are not revealed. Star-Lord receives the most development, as his origins are visually conveyed on-screen, but every other Guardian’s backstory is only verbally communicated. While it’s great finding out any information about these characters because they are so interesting, the filmmakers’ decision to tell, but not show ends up being a disservice to the characters and the film’s audience. Hopefully, the sequel sheds further light on who these characters are and where they came from.

2. It Appeals to a Wide Audience

Generally, a good summer movie has to appeal to both the young and old, as these films are typically aimed at younger audiences, and many parents have to come along for the ride. Guardians of the Galaxy hits the sweet spot of appealing to both demographics, as it has enough action and witty comedy for the adults, and visually-striking wonderment for the younger crowd.  Typically, comic book movies are thought of as having mass appeal given the current cultural fixation with superheroes, but it’s impressive that Guardians hits the right tone given that it’s a new film with a potentially confusing premise. The cool character designs also don’t hurt, as kids are likely going to to be asking for Rocket Raccoon action figures after seeing the film, which is sure to make Disney and its partners even happier.

1. It Opens the Door for New Franchises

As already mentioned, Guardians of the Galaxy was a risky venture for Disney/Marvel because it was an unknown entity based on obscure material. The film’s outstanding success is an exciting prospect because it ensures that Marvel will continue to take chances with their future films. If a movie based on a property as odd as Guardians can succeed, it’s well within the realm of possibility that other largely-unknown characters in Marvel’s back catalogue could have their own successful films. Work is already well underway on films based on characters like Ant-Man and Doctor Strange, and there have even been rumors recently that a Squirrel Girl movie might be in the pipeline as well. It would seem that the success of GotG means that no character is too weird or unpopular to have its own film franchise, which is a pretty exciting prospect.