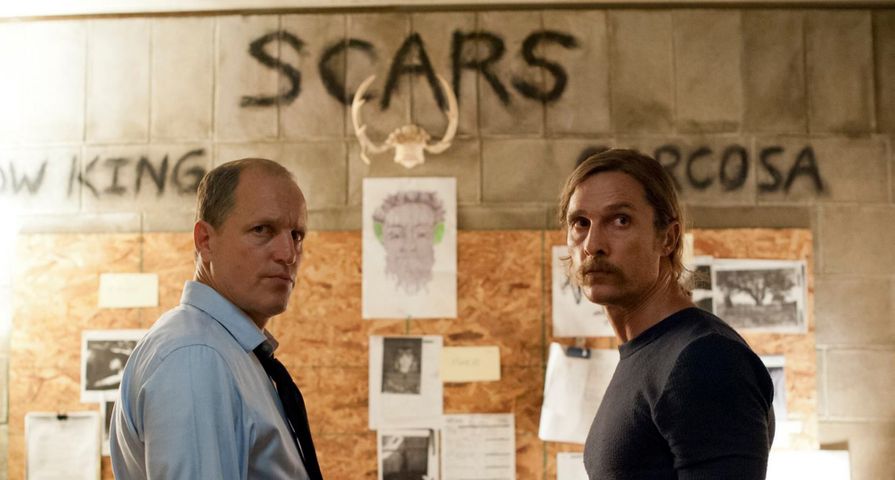 HBO’s True Detective is a Louisiana crime drama starring Woody Harrelson, Tory Kittles, Matthew McConaughey, Michelle Monaghan, and Michael Potts.  The series was created and written by Nic Pizzolatto and aired originally on January 12, 2014.  The season ran for eight episodes and averaged 11 million viewers, giving the highest number of viewers for a first season since Six Feet Under with 11.4 million in 2001.

Michael Potts, who portrays Detective Maynard Gilbough in True Detective Season One, was on Broadway!  He played Mafala Hatimbi in The Book of Mormon and sang “Hasa Diga Eebowai” which roughly translates into “F–k You God”.

Maisie Hart and Audrey Hart are played by real life sisters Meghan and Madison Wolfe.  These young girls are also seasoned actors.  Meghan appeared in American Horror Story (2014) and just completed filming Trumbo (2015).  Madison had five movies under her belt before shooting True Detective, and she will also be featured in Trumbo.

Woody Harrelson is not the only cast member of True Detective with a criminal record.  In 1999, Matthew McConaughey was arrested in Texas for resisting transportation when he was being questioned for marijuana possession.  In the same year, he resisted arrest when police investigated a disturbance at his home.  When the police arrived, McConaughey was found playing the bongos naked and in possession of illegal drugs.

Although he plays a detective on HBO, Woody Harrelson has had encounters on the other side of the long arm of the law.  In 1983, he was arrested in Ohio for disorderly conduct when he was dancing in the street.  In addition, he punched an officer and jumped on a police vehicle.  In 1996, he was charged for possessing marijuana in Kentucky but the charges were dropped.  He is not the only one in his family who has committed crimes as his father was charged with the murder of Federal Judge John Howland Wood and given two life sentences.  Harrelson still claims his father in innocent.

Michelle Monaghan who played Maggie Hart, Detective Marty Hart’s wife, originally wanted to be a journalist and attended Chicago’s Columbia College for three years.  To pay her tuition, she modelled.  She left Chicago in 1999 to pursue modelling full time in New York and appeared on runways in Hong Kong, Singapore, Milan, and Tokyo.

Matthew McConaughey and Woody Harrelson are no strangers to working together.  They appeared together for the first time in EdTV (1999) as brothers.  In 2008, they teamed up again in Surfer, Dude.  They are also very good friends off screen.  On Ellen Degeneres, Harrelson told Ellen about a particular Christmas where McConaughey snuck into his room, grabbed clothes from Harrelson’s closet and gave them to Harrelson as Christmas gifts.

Originally Matthew McConaughey was offered the part of Detective Marty Hart, however, McConaughey asked to switch roles and play Detective Rust Cohle because he was really interested in characters with monologues.  To prepare for the character, McConaughey wrote 450 pages detailing Cohle’s behaviours and thought processes throughout the storyline.  McConaughey recommended pal Woody Harrelson for the role of Hart.

The director of True Detective Season One, Cary Joji Fukunaga, decided to get real world experience for shooting the series by working with a homicide detective at Louisiana State Police’s Criminal Investigations Division.  He wanted to understand what it was like to be a detective in the South during the 90s.

2. Happily Ever After Almost Didn’t Happen

Originally writer and creator Nic Pizzolatto wanted to finish the first season with Marty and Rust trapped in the maze and never seen again.  However, he later opted to end the show on a more ‘positive’ note.