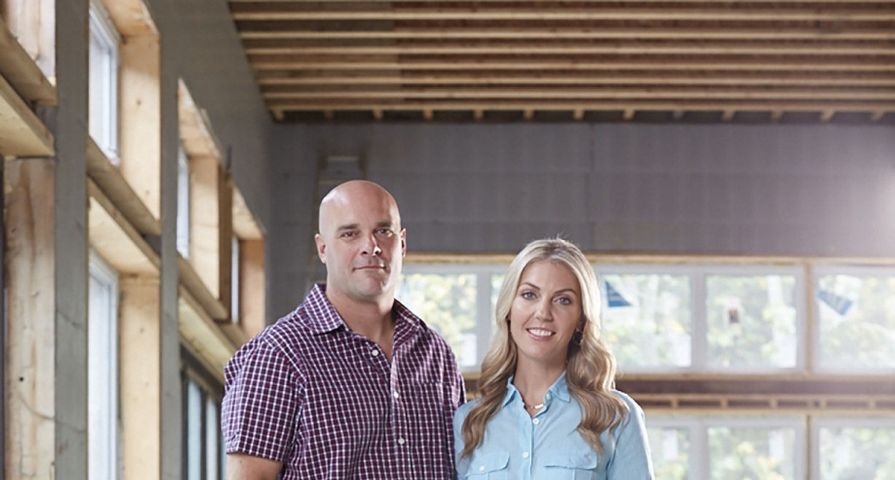 HGTV is the go-to channel for viewers looking to watch their favorite design, decorating and remodeling shows. It hosts a variety of shows with everything from DIY renovations to design challenges. The network has spawned many new stars who rose to fame through hosting their own reality shows and showcasing their unique talents, and some of the most popular HGTV stars appear alongside their partners, which adds a relatable aspect to their show making them even more lovable to their fans! We’ve compiled a list of the 8 cutest couples on HGTV!

This Canadian star rose to fame on HGTV through his hit series, Income Property which ran on air from 2009 to 2016. His wife, Sabrina McGillivray was introduced to viewers when the couple got their own show, Moving the McGillivrays which featured their family as they buy and renovate their dream home. On this show, we got to see the adorable couple interact and how great of parents they are to their two daughters, Myah and Layla.

This couple haven’t been featured on HGTV quite yet, but their show Flip or Flop Atlanta is well in the works. Ken and Anita run a business flipping homes in the Atlanta area and according to their HGTV bio, they flip about 100 homes a year! Viewers are sure to fall in love with this upbeat couple as they search for abandoned homes that have gone to the gutter by squatters and fix them up into homes that are not only liveable, but pretty amazing! Their show is set to premiere in the summer of 2017, shortly after Flip or Flop Las Vegas hits the air this Spring.

Janna and Paul Lafrance are the master minds behind HGTV’s Deck Wars, Disaster Decks and Decked Out. Paul is the host of these three shows and Janna, his wife co-owns their design company Cutting Edge Construction. She’s frequently makes appearances at Paul’s Decked Out events and in her bio jokes shes “responsible for all things impressive and humorous about Paul Lafrance!” The couple share four kids together — all girls!

HGTV viewers aren’t too familiar with this couple yet, but they will be very soon! Bristol and Aubrey Marunde are one of the newest couples to join reality television on HGTV’s upcoming Flip or Flop Las Vegas which is set to premiere on April 6. Aubrey is a real estate expert and designer while Bristol, who is a former MMA fighter, will act as a contractor and be heavily involved in the design process. In the promo for their show these two look like a pretty solid team — we can’t wait to see what they bring to the network!

This couple isn’t exactly seen on HGTV, but rather more behind the scenes. Dave Kenney is part of the deck-building crew on Paul Lafrance’s shows, Deck Wars, Disaster Decks and Decked Out. To make things even more interesting, Dave married Paul’s sister-in-law, Joy 10 years ago. It’s safe to say there’s a lot of shop talk going on at their family events!

This Canadian couple rose to fame after Bryan landed his own DIY show called Leave it to Bryan and Diaster DIY. Sarah was introduced to HGTV fans when the couple got their own show called House of Bryan focused on following the couple as they build their dream home out in the country. Viewers got to see how the couple worked together as they picked out all the nitty gritty details of their home and tackled all the issues that arose with their fun-loving banter and meet their four little kiddies!

While Portia De Rossi doesn’t necessarily appear on Ellen DeGeneres’ HGTV show, Ellen’s Design Challenge, we all know who she is and we couldn’t resist putting these two on the cutest couples list. Ellen talks about her wife of nearly 10 years a lot so we know she has some input into Ellen’s show or at least acts as a sounding board for Ellen behind the scenes. It’s clear these two are extremely happy together and the perfect match — plus they have the cutest little puppy!

It’s probably no surprise that this Texan couple lands in the number one spot on this list because they are just so darn cute together! It’s impossible not to see how much these two care about each other from the way they talk about each other in interviews and on-screen, and a quick glance through their social media shows off their goofy personalities. Fans love watching them on their show Fixer Upper as they take on home wrecks and turn them into clients’ dream homes! Not only are Chip and Joanna a great couple who’ve been married for almost 15 years, they also have the cutest little family. Chip and Joanna have four kids together who they raise on their 40-acre farm in Waco, Texas.