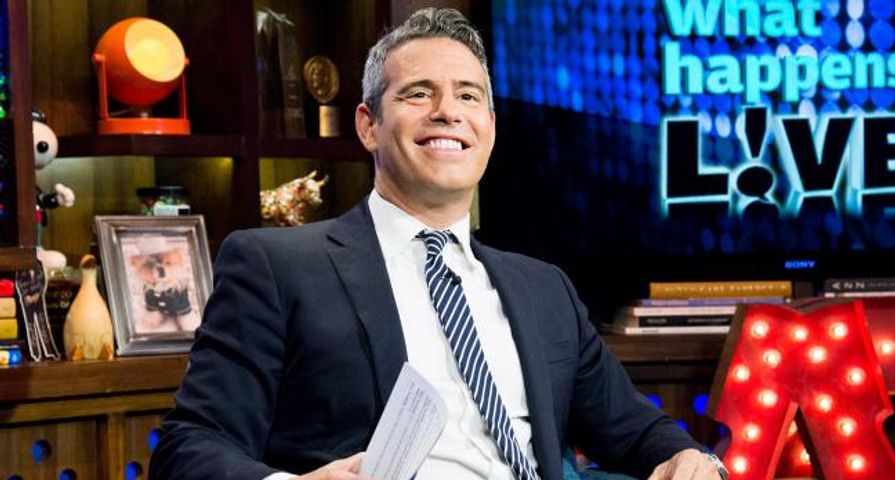 Andy Cohen’s newest book, Superficial: More Adventures from the Andy Cohen Diaries, just hit shelves today and it’s already making waves for all the juicy details about his various encounters with celebrities from Dolly Parton to Taylor Swift to Oprah Winfrey! The Watch What Happens Live host penned the book as an extension of his previous book, The Andy Cohen Diaries: A Deep Look at a Shallow Year. Written in diary form, it’s full of stories about his life over the past two years and some of them are pretty personal! The best part is, of course, is all the gossip! Even he admitted might have gone too far at some points in the book. Here’s a look at the 10 biggest bombshells from Andy Cohen’s new book:

The problem with celebrities dating other celebrities is that it sets up a situation for some award run-ins at future events if the relationship goes South. According to Cohen, there was almost a reunion between exes, Jennifer Aniston and John Mayer last February at the tribute for TV director and producer, James Burrow. The event was highly publicized as a Friends reunion, but behind the scenes there was one other potential reunion on the table! Cohen said he was having a drink with Mayer when he realized the cast of Friends (except for Matthew Perry) was sitting at another nearby table. He went over to greet the cast, but of course, Mayer passed on the idea. “We realized they had to walk by our table to leave and that would be a ‘moment.’ As much as I wouldn’t loved to see the ultimate reunion — Aniston and Mayer — we left before they did and went to bed. Separately,” he said.

The 48-year-old talk show host revealed that he was invited to see the iconic singer’s bedroom and almost convinced her to do a radio show with him. He had said to her upon one of their meetings, “I told her, you can do it from your house and not have to worry about makeup or anything.” Unfortunately, as close as he came to convincing her, it never went through. He also said he deeply regrets missing out on a tour of her bedroom, so we’re assuming she offered!

In his book, Cohen shares a story from the most recent Met Gala (an event he attends each year alongside Sarah Jessica Parker) involving an awkward incident with Taylor Swift. Cohen has admitted on more than one occasion that he tends to put his foot in his mouth, but this was probably one of the worst! He ran into the 26-year-old actress when she was looking for a place to stand and watch Lady Gag perform. “Why I felt I needed to get involved I will never know (maybe I was auditioning for her squad?) but I innocently said exactly the wrong thing to her, which was, ‘Your friend Katy is sitting in the corner and there’s plenty of room around her.'” Not surprisingly, Swift was a little taken aback and not impressed with his humor. “Katy who?” she replied. Cohen wrote, “I said, ‘Perry,’ at which point she clearly let me know that she’s the exact opposite of her friend.” He continued and said he tried to back pedal and make light of the situation, but it didn’t work and Swift told him not to put this on his show. “She didn’t threaten me about putting it in my book, so here we are,” he wrote.

Usually when someone is invited onto one of Oprah Winfrey’s shows, they don’t say no, but apparently this rule doesn’t apply to Andy Cohen! On Jan. 15, 2015, he wrote in his diary, “Today was the day I said no to Oprah.” According to Cohen, he was invited to appear on the OWN show, “Oprah: Where Are They Now?,” but he turned down the opportunity because he felt like it wasn’t appropriate for him at the time. He felt like he was still relevant and that “people should pretty much know where I am now.” He also recounted another time that he turned down the iconic talk show host after he and Anderson Cooper were invited to have lunch in Santa Barbara with besties, Gayle King and Oprah Winfrey. Cohen had to turn down the invitation because he had to fly from New York to film a live show and the timing just didn’t work out. He wrote that he experienced major “FOMOBO, which is Fear of Missing Out on Brunch at Oprah’s.”

Last Spring, Michael Strahan’s exit from Live with Kelly for a position on Good Morning America was highly publicized. He received a bit of flack from not only the media, but also some of Ripa’s closest friends like Andy Cohen. Cohen was vocal about his thoughts on the situation and during an interview he said Strahan was leaving a highly coveted position that he deemed the “greatest job in TV” and it’s not a gig anyone should ever give up. This was a subtle snub at Strahan. Not long after he made these comments, he ran into the former co-host at the Met Gala and Strahan apparently told Cohen that his words had “hurt his feelings.” Once again, Cohen had to back pedal his words and told the former NFL player that he didn’t say anything bad about him personally. The two eventually “hugged it out.” He also said that despite numerous reports that he was in the running for replacing Strahan on Live!, he said he was never contacted by ABC to be a permanent co-host alongside Ripa.

Surprisingly, Cohen takes several jabs at his so-called friend, Kathy Griffin. The first one came at the beginning of the book. He starts the book off at Joan Rivers’ funeral and said when he was walking out of the memorial in 2014 alongside Griffin, he gave her the silent treatment because “she’d been sh-t talking me earlier this week.” He also said that she texted him for an urgent conversation but he snubbed her. When he finally got back to her, he was annoyed because all she wanted to talk about was herself and whether or not she should take Rivers’ spot on Fashion Police. Yikes! This definitely doesn’t make Griffin look good. She ended up quitting the show because it promoted a “culture of unattainable perfectionism,” and Cohen took the opportunity to lay another jab on her during an episode of Watch What Happens Live. “She is the pot calling the kettle black. She has been body-shaming for years.”

Cohen dishes on a lot of celebrities in his book, some of it is good and flattering, but then there’s a few other things that could be taken the wrong way, especially if it’s directed at the wrong celebrity. This particular comment wasn’t necessarily insulting, but weren’t not sure it’s a compliment either. Cohen recalled meeting legendary country star, Dolly Parton, at a star-studded event and said she smelled like “a combination of dairy and perfume.” Sounds…odd?

Cohen claims he is Madonna’s number one fan and proved this by getting down on his knees and kissing her ring at a Hollywood event last May. “Literally kneeled by her at her table and said I didn’t like all the ageism being leveled at her,” he wrote. Cohen also noted that Madonna, similar to Dolly Parton, has a very particular scent, “Are there Madonna-approved scents, and then does she have someone in there spraying her scent before she gets there?” He did a diary entry on his attendance at Madonna’s 57th birthday party which took place on her “massive” horse farm in Bridgehampton. He wrote that he went to the party after his friends convinced him to it would be worth leaving his Fire Island rental, and apparently it was! Cohen said the party had a Spanish Gypsy theme and Madonna was seated on a throne (of course). He also wrote that he thought the luxurious party would have set her back about $1.5 million. He talked about chatting with Madonna about her kids and getting a hug from Rocco. Later on in the book he divulges a little more about the “Material Girl” singer, and revealed he consoled her after her relationship with Rocco became estranged during a nasty custody battle with his father, Guy Ritchie.

Cast Of Real Housewives Of Potomac: How Much Are They Worth?

As previously mentioned, Cohen often finds himself with his foot in his mouth because he will say things that are inappropriate or uncomfortable, but don’t we all? The one particular incident that makes him feel the most guilty is when he made fun of Tori Spelling after she burned herself on a hibachi grill at Benihana. He made these comments during a live taping of Watch What Happens Live and not long after, the Beverly Hills, 90210 actress penned him an email to express how hurt she was by his comments. She alleged that the joke was not nice and she would “never be able to use her arm again.” Cohen wrote in his book that he has apologized profusely to Spelling for saying what he did, but he thinks the relationship is tarnished forever.

The executive producer behind Bravo’s Real Housewives franchise and host of all the Real Housewives reunions shared details about his top secret lunch with star of The Real Housewives of New Jersey, Teresa Giudice before she went to prison for a year. He told The Daily Dish: “I also wrote about a top-secret lunch that Teresa and I had right before she went to jail where we got a lot off our chest. She told me how hurt she had been by me sometimes on episodes of Watch What Happens Live. she had left the show feeling like I had made fun of her or I had hurt her feelings. I had made a joke about how she might look in an orange jumpsuit. We didn’t wind up using that in the one-on-one that I did because it was inappropriate and I apologized to her,” he said. The book contains many of his emails that were exchanged with Teresa during her time in prison. “I printed a lot of emails that Teresa and I sent to each other in prison. Sometimes my recollections of the emails are a little tongue in cheek, so I hope she takes them in that way.”