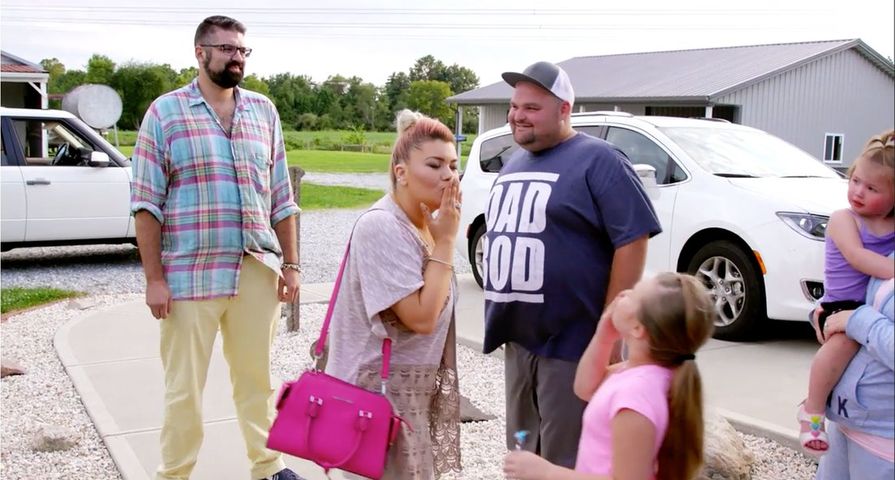 Although we are only a few episodes into the new season of Teen Mom OG, things seem to be moving at lightning speeds especially for star Amber Portwood. After ending things with fiance Matt Baier, last episode Amber introduced everyone to her new boyfriend Andrew Glennon and in the Monday, January 8 episode, he meets her daughter Leah! Follow along for all the drama and big moments from the episode for all the stars!

After not being completely sure just where her relationship with Andrew was going, it was clear Amber was becoming serious with him fast in this episode after they attended the MTV Video Music Awards together. Although she was adamant she did not want her daughter Leah to meet him until she knew where the relationship was headed, the accidental first meeting between Andrew and Leah happened anyway.

When Amber arrived at her ex’s Gary Shirley’s house, Gary decided he wanted to meet her new boyfriend so Amber asked Andrew to get out of the car. While the meeting was just supposed to be between Gary and Andrew, everyone came running out including Leah leading to the introduction. Afterward, Amber admitted to her boyfriend she was concerned about having different men in her life around Leah.

Meanwhile, Catelynn went to the Video Music Awards without her husband Tyler because he was too busy working on renovating their new house. While Catelynn was away Tyler met with his mom and opened up about his concerns for his dad Butch who he presumed was back on drugs. After, Tyler talked to Butch and he agreed that when he was done helping his son with the house, he would go to rehab and acknowledged he needed more than just the regular in-patient 30 day treatment.

With Maci and Taylor working on balancing a hectic work-life schedule, Mackenzie was getting increasingly frustrated with her new husband Ryan. Last episode, fans saw the pair argue because of Ryan’s unwillingness to get ready for their engagement photo shoot, and the tension continued this week. After the pair argued in the car, Mackenzie opened up to a friend that she has a hard time dealing with Ryan’s temper and thought things would be different when he came home from rehab. “I knew it’d be hard, but I didn’t know it’d be like this,” she said. “It’s just a daily dose of I don’t know what’s coming my way.” She also admitted that she was concerned about the possibility of him using again, but in a surprising Ryan move, he later told her he felt bad for putting a burden on her and his family and said he regretted what he did. “You’ve been very, very understanding. I couldn’t have done this without you,” he told her, and she started crying.

Then of course there was Farrah. While still trying to make an effort with her mother Debra, she invited her to New York City for a fashion show with herself and Sophia so that they could bond. Instead, Farrah and Debra began arguing again when Debra gave her daughter and Sophia the invitations to her wedding but revealed she was also inviting Amber. Farrah was not happy with the news and said her mom was “welcoming negativity” but inviting Amber whom Farrah has feuded very publicly with, and told Debra she didn’t want any part in her wedding day.