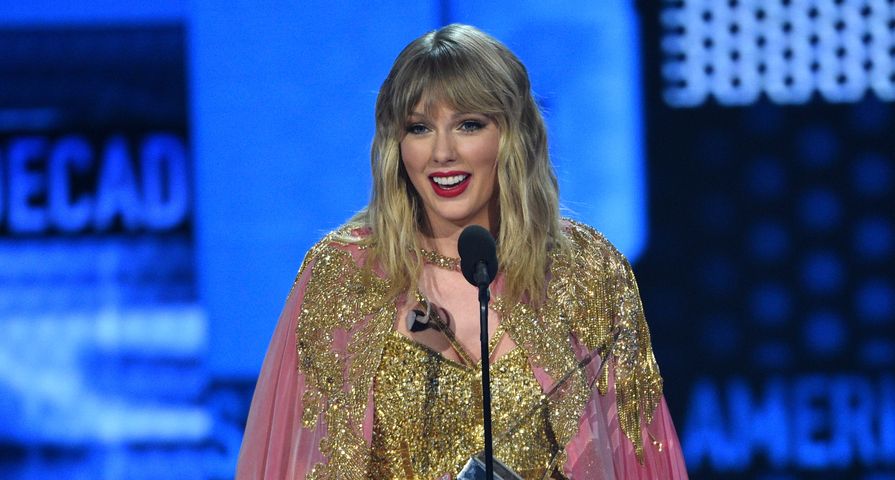 On Sunday, November 24, Swift was presented the Artist of the Decade award by Carole King at the Microsoft Theatre in Los Angeles, and she was overcome with emotion as she accepted the honor.

“You guys, first of all I want to say, that getting to share the stage with Misty Copeland and Craig Hall and Camila Cabello and Halsey, and all those amazing dancers tonight was absolutely, in so many ways, a dream come true,” Swift began her acceptance speech. “That performance was even more fun than I hoped it would be. Oh, my god.”

Swift also performed a mashup of her biggest hits, which included fan favorites “Love Story,” “I Knew You Were Trouble,” “Blank Space,” “Lover” and others before she took the stage to thank King for presenting her the award and her fans.

“I just remember, when I fell in love with music it was right around the time that I realized that how marvelous it was that an artist could transcend so many different phases and changes in people’s lives, so you taught me that’s a possibility,” she continued.

Before the singer exited the stage, she thanked her fans and said, “I guess what I’m trying to say is that all any of the artists, or really anyone in this room, wants is to create something that will last. Whatever it is in life. The fact that this is an award that celebrates a decade of hard work and of art and of fun and of memories, all that matters to me is the memories that I’ve had with you guys, with you the fans over the years.”

“Guys, we’ve had fun, incredible, exhilarating times together and may it continue. Thank you for being the reason why I am on this stage,” Swift added. “From the very first day of my career until tonight, I love you with all of my heart, thank you for everything. Thank you, AMAs. Thank you. Just, thank you. I’m so lucky to get to do this. Thank you.”

Swift, overwhelmed with emotions, continued to thank her dedicated fans after receiving her award.

“You’re so amazing. Wow, I really don’t have anything articulate to say. I just — just that [the] fact that the last year of my life has had some of the most amazing times and also some of just the hardest things I’ve gone through in my life,” the singer said. “Not a lot of them are things that haven’t been public, and I wanted to thank you so much for being the thing that has been a constant in my life.”

Swift continued, “This industry is really weird. Sometimes people who do what we do feel like, I’m sure some of you feel like this too, with your lives — like, you feel like your stock is up or down, or people like you or they don’t, or you’re feeling bad about yourself. But, the people that hang in there for you are the ones that you will never forget.”

Swift, who now has received a total of 29 AMAs awards, concluded her acceptance speech and thanked everyone who has continued to believe in her.

“And the fans who have hung in there for 15 years of me doing this, like, I don’t even know what I’m saying,” she expressed. “This year for me, has been a lot. A lot of good, a lot of really complicated and so on behalf of, like, my family and me, thank you so much for being there and for caring.”

For the past couple of months, the singer has been surrounded by drama with Big Machine Records’ executives Scooter Braun and Scott Borchetta. She claimed the two were blocking her from playing any of her old music at the award’s show and also alleged they were prohibiting her from using her old songs in an upcoming Netflix documentary about her life.

“[They] said that I’m not allowed to perform my old songs on television because they claim that would be re-recording my music before I’m allowed to next year,” she posted to social media, on November 14, about her desire to re-record and re-release her past hits.

“I just want to be able to perform MY OWN music. That’s it,” said added. “I’ve tried to work this out privately through my team but have not been able to resolve anything.”

Braun finally broke his silence about the drama at the 2019 Entertainment Industry Conference on November 21, and said, “I just think we live in a time of toxic division, and of people thinking that social media is the appropriate place to air out on each other and not have conversations. I don’t like politicians doing it. I don’t like anybody doing it.”

Braun also commented that he tried to have a private conversation with Swift to resolve their “miscommunications,” and said, “We’re inciting all of this by continuing these arguments in public. We just need to go behind closed doors and see if we can have a conversation. And if we’re not having conversations, then I don’t think we’re going to find resolution.”

Big Machine Records released a statement concerning Swift’s claims about not being able to use her old hits during her AMAs performance, “Taylor, the narrative you have created does not exist. All we ask is to have a direct and honest conversation,” the statement said. “To date, not one of the invitations to speak with us and work through this has been accepted.”