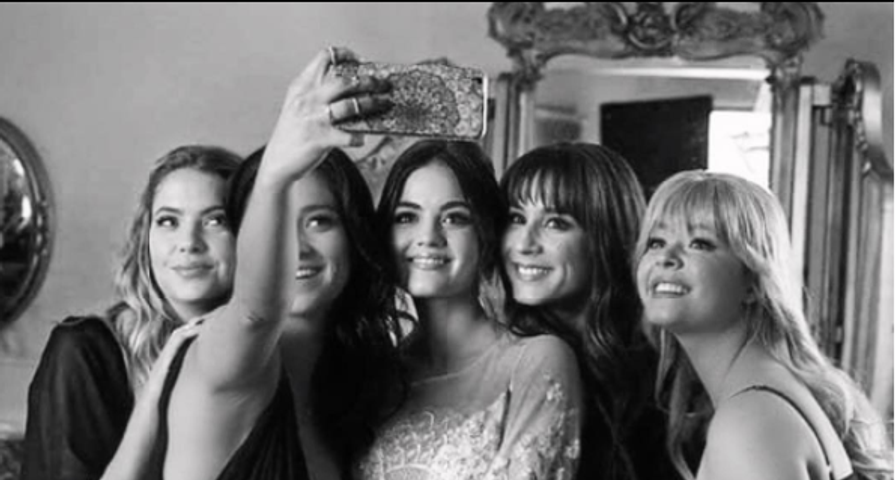 The stars of Pretty Little Liars took to social media to profess their gratitude and sadness over the show’s conclusion on Tuesday, June 27. After seven seasons of torment from the infamous “A,” the show finally put to rest the mystery everyone was dying to know about the face behind the text messages.

The series creator, Marlene King, tweeted, “Tomorrow we will hear for the last time, ‘Previously on Pretty Little Liars.’ It’s been an amazing 7-year journey. I am forever grateful for our cast, writers and crew.”

Sasha Pieterese, who played Alison Dilaurentis, tweeted her own emotional farewell to fans stating, “You guys have been so loyal and passionate! You have made every second possible, worth it, gratifying, touching, and especially memorable.”

Troian Bellisario tweeted about her journey as an actress and the unexpected path starring in Pretty Little Liars led her down, “When I left collage I thought I was headed to NYC (hopefully for some jobs on stage).Little did I know life was actually taking me to Rosewood, Pennsylvania. Where they insisted I would need to do high school for about 6 more years.”

The conclusion of Pretty Little Liars left cast member Lucy Hale at a loss for words as she tweeted, “For me to be speechless says a lot, but I’m finding it hard to find the words to express my gratitude to every single person that made this show a success.”

From the many other heartfelt messages from cast members and crew that blew up our social media Tuesday night, it is clear the cast of Pretty Little Liars is just as much a family in real life as they appear on the show. Despite the show’s conclusion, as Mitchell said best in her own social media post, “The streets of Rosewood will always feel like home.”

Today closes the chapter on a very significant part of my life. A chapter I had never imagined or even dreamt of having written. When I left collage I thought I was headed to NYC (hopefully for some jobs on stage) Little did I know life was actually taking me to Rosewood, Pennsylvania. Where they insisted I would need to do high school for about 6 more years. Life (for reasons that will continue to reveal themselves to me ) made me a Pretty Little Liar. For 8 years. For around 10,000 hours of my life it asked me to be Spencer Hastings. It took me to days where I couldn’t stop laughing, and nights when I wished I could have been sleeping in bed, instead of running in the wet and cold for the umpteenth take at 5AM but somehow we made it through and we had fun even then. Every moment with this cast and crew, in this town, every breath I took with Spencer, every text, dead body, new suspect, terrifying scream, new relationship and “kisses, A” taught me something extraordinary. It taught me patience, and how to approach my craft, how to direct, produce, it taught me about collaboration, experimentation, risk, friendship, family, empathy, sacrifice and above all LOVE. Being Spencer Hastings in this crazy world is something I still don’t quite understand, but I know it was a rare and beautiful gift. A gift that will continue to give for the rest of my days on this Earth. And I wanted to say THANK YOU to all of the people who gave it to me. To all of the people who believed in me and made it possible, to my friends and family who loved me through it and above all to YOU, the fans, who watched, who tweeted, and posted, who theorized, swooned and screamed. We got a lot out of this experience, but I would have been nothing without you. Thank you and I love you all very much. (I love you too, Spencer, you weirdo). Enjoy tonight. I know I will. #pllendgame #spencerhastings