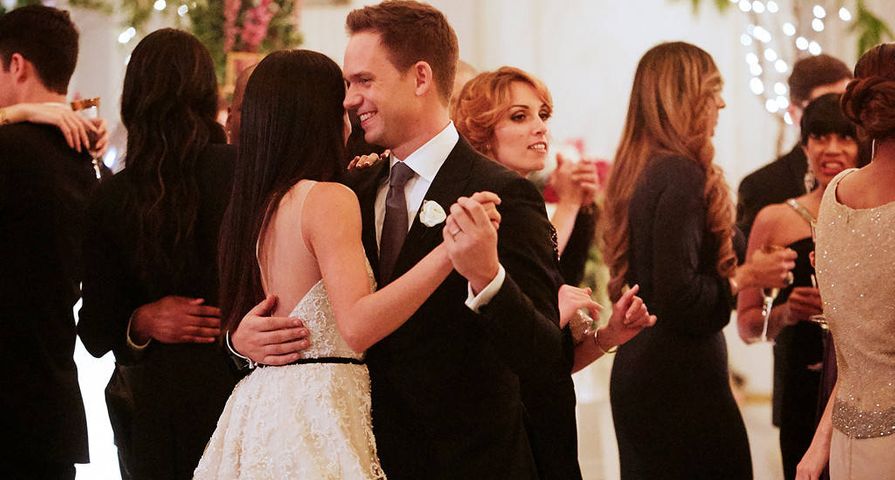 It was the end of an era for two of the biggest stars of Suits on Wednesday, April 25.

Both Meghan Markle and Patrick J. Adams said goodbye to the long-running show during the episode, but it also marked the end of Markle’s acting career entirely as she prepares for her new life as a Royal.

In the special two-hour episode, Markle’s character Rachel Zane and her on-screen fiance Mike Ross played by Patrick J. Adams receive an incredible job opportunity, but since it is in Seattle it means they have to pack up their life, but not before finally tying the knot.

After the news of Markle’s engagement to Prince Harry broke in November, USA Network confirmed that she would be leaving the show. “From all of us at USA Network and Universal Cable Productions, we want to send our most heartfelt congratulations to Meghan Markle and Prince Harry on their engagement. Meghan has been a member of our family for seven years and it has been a joy to work with her. We want to thank her for her undeniable passion and dedication to Suits, and we wish her the very best,” their statement read.

After the announcement of her engagement, Markle gave a nod to her time on the show, saying, “It’s a new chapter, right? And also, keep in mind, I’ve been working on [Suits] for seven years. We were very, very fortunate to have that sort of longevity on a series,” she explained, adding, “I’ve ticked this box, and I feel very proud of the work I’ve done there, and now it’s time to work with [Harry] as a team.”

For his part, Adams took to Twitter to sign off of Suits, writing, “Tonight my last episode of #Suits ever is airing. Weird. Hope it doesn’t disappoint. Thank you to everyone who turned an audition into 7 surreal years of my life. Hope you enjoy it. I know I have. Peace.”

Back when he confirmed the news he was leaving the hit series, Adams also told The Hollywood Reporter, “[Mike] changed my life for the better. We are a family on Suits, on screen and off. And though Mike Ross and Patrick Adams are both moving on, as far as I’m concerned, they’ll always be members of my family.”