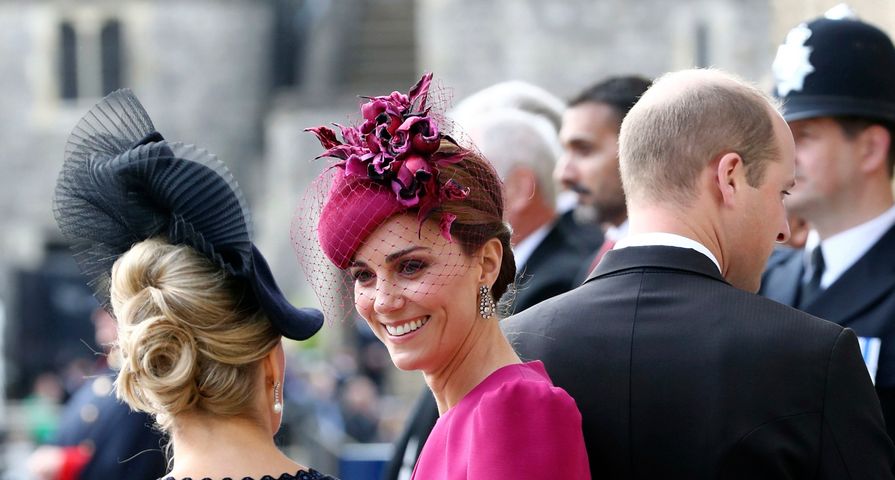 For the second time in five months, the British royal family donned their very best to celebrate a royal wedding and this time it was for Princess Eugenie’s wedding to Jack Brooksbank.

Among the best dressed was without a doubt Kate Middleton as the Duchess of Cambridge looked absolutely stunning in a burgundy number, which marks one of her first appearances since returning from her maternity leave after welcoming Prince Louis back in April.

Duchess Kate donned a burgundy ensemble designed by none other than Alexander McQueen and also wore a matching velvet Raspberry beret by Philip Treacy. Kate’s knee-length dress featured a cinch-waist, flared skirt and three quarter-length sleeves, and she finished the look with gorgeous drop earrings and dark burgundy shoes.

She was of course accompanied by husband Prince William and the pair sat next to Prince Harry and Duchess Meghan (who also wore an outfit designed by her wedding dress designer) while two of their children Prince George and Princess Charlotte served in Eugenie’s bridal party.

Although Duchess Kate has been on maternity leave, she has certainly been busy with wedding season! Aside from Prince George and Princess Charlotte also being in their Uncle Harry’s wedding to Meghan back in May, Kate also to prepare her two children to be a part of the wedding party for the wedding of her longtime friend Sophie Carter last month.

Animal print isn’t just a trend that circles among Hollywood starlets, but also within the Royal family! Kate Middleton definitely has a soft spot for this black and white leopard print dress that she’s been photographed wearing on multiple occasions throughout the years. She wore it for the first time in 2013 paired with a half-up hairstyle and black fascinator, then once again in 2015 with a ponytail and black clutch.

This speckled Michael Kors coat is a Kate Middleton favorite and has been spotted on the Duchess on multiple occasions throughout the years! She wore it in 2016 while opening a new playground at Hampton Court Palace and again in 2014 when she attended an Anzac Day remembrance service. Most recently, she wore the coat with a wide brim hat and her hair up for a dedication service for the new Iraq and Afghanistan memorial in March 2017. With the wide brim hat and polished updo, Royal fans couldn’t help but compare her look to Audrey Hepburn from Breakfast at Tiffany’s!

Since this coat is such a bold print, it was even more evident when the Duchess decided to repeat it a few years later! She was first spotted wearing this sophisticated Missoni coat to the Somme Centenary commemorations in June 2016 in which she styled it with a pillbox hat and simple black pumps. In April 2017 she was spotted wearing the coat again, this time styled with a bolder fascinator and a pair of black tights.

The Duchess of Cambridge isn’t shy to wear a gala gown twice, especially since she’s mastered the key to making a dress look different the second time around. She first wore this ivory Roland Mouret gown to a dinner hosted by The Thirty Club at Claridges in May 2012. She left her hair down and wispy and styled the dress quite minimally with a simple pair of drop-style earrings. The second time around Kate was spotted wearing the same ivory gown to a Royal Film Performance of Mandela: Long Walk to Freedom at Odeon Leicester Square. This time, however, she donned a half-up hairstyle and added a chunky silver necklace to style the simple dress differently.

This brightly colored outerwear piece has been one of Kate’s go-to’s during her maternity days. The magenta Mulberry number is straight cut so it works perfectly to flatter a budding baby bump. The first time we spotted her wearing this memorable piece was in December 2014 during a New York City visit with Prince William. She’s repeated the coat multiple times since, including most recently in January 2018 at the Coventry Cathedral during her third pregnancy.

Brightly colored outerwear isn’t just a favorite of the Queen, but also the Duchess of Cambridge! Another one of her staple coats is this muted blue number by Alexander McQueen, the same fashion house that designed her iconic lace wedding dress. Kate was first spotted wearing the McQueen coat in 2014 at the “Knights of the Sky” exhibition in Wellington, New Zealand. She later was spotted wearing the same coat in February 2016 during a celebration for the 75th Anniversary of the RAF Air Cadets London. Of course, for each occasion, she switched up her brooch to coordinate with the event.

When Kate finds a strong dress that fits well and flatters her figure, she sticks with it and isn’t afraid to wear it on multiple occasions. The Duchess has been spotted wearing this chic black Temperley lace dress for multiple royal engagements and events. In November 2012, she was spotted pairing it with a red clutch for a 600th-anniversary reception and dinner for St. Andrews in London. One year later in December 2013, she brought the Temperley dress out again and wore it for a screening of David Attenborough’s Natural History Museum Alive in London.

One of Kate Middleton’s go-to tricks to styling a dress for the second time is changing up her hairstyle like she did with this dove grey number. She was first photographed wearing the Roksana Ilincic dress in July 2012 to attend the UK Creative Industries Reception where she pulled her hair up in a polished low bun. A few years later, in July 2016, she rocked the dress for a second time at a lunch reception at the Anna Freud Centre and changed things up by wearing her hair wavy and loose.

Kate Middleton has seemingly perfected her wedding guest look and has been spotted wearing this muted gold look for multiple civil ceremonies! She was first spotted wearing this look when she was just Prince William’s girlfriend back in 2006 for the wedding of Laura Parker-Bowles. Later in 2012, she wore the dress again to attend the wedding of Zara Phillips and Mike Tindall in Scotland. This time around, however, she wore her hair in an elegant half-up style with a side slanted fascinator on her head.

This turquoise printed dress is one of Kate’s staple pieces for the summer months, and we don’t blame her! It’s bright, makes a statement yet is still modest in its shape and structure. The first time we spotted Kate rocking this number was in September 2012 at Henderson Airport in Honiara, Solomon Islands on the Royal tour of the Far East. The second time she rocked this dress was in the stands at Wimbledon in 2014.

Once again, Kate proves that once you find a dress that works, there’s no shame in sticking with it. She was first spotted in this Jenny Packham gown for The Portrait Gala in February 2014 then wore it again later that same year in December for a gala in New York. The second time around she changed her look up slightly by pulling her hair into an elegant low bun to allow the bateau neckline and sapphire earrings to really shine.

Kate Middleton is a huge fan of feminine textures such as lace and eyelet, which is why we aren’t surprised she’s been spotted in this white summer dress on multiple occasions. She wore it for the first time in April 2014 on the official Royal tour of Austrailia and New Zealand. She wore it once again just a few months later at Wimbledon where she was photographed in the stands in July 2014.

This floral L.K. Bennet dress was one of Kate Middleton’s most popular looks of all time, which is why it’s not unexpected that she’s worn it more than once. The first time she rocked this summery number was in April 2014 for the official royal tour of Austrailia and New Zealand. She wore it once again in August 2016 during a Royal visit to Luton.

This Luisa Spagnoli skirt suit has been brought out on multiple occasions throughout the years and is one of Kate Middleton’s signature looks! The first time she rocked the statement number was in February 2011 at the University of St. Andrews before the royal duo were officially married. She stepped out wearing this chic look again in 2015 at a Cricket World Cup event during the Royal New Zealand tour.

10 Super Rich Royals: How Much Are They Worth?

This yellow and white dress is definitely quite distinct, which is why we recall Kate Middleton wearing it more than one time for public appearances. The first time she was spotted in the statement number was in April 2014 while holding Prince George during their Austrailia and New Zealand Royal tour. She later wore the same dress to a Wimbledon match in 2016 where she was able to be spotted from a mile away in this head-turning number.

One of the most memorable Kate Middleton looks of all time is this blush pink shimmering Jenny Packham gown that we don’t blame her for wearing on multiple occasions! The first time she wore the striking look was early on in her royal days in June 2011 just shortly following her wedding to Prince William. She looked every bit the blushing bride with her hair in loose waves and skin glowing. In 2016 she opted for the elegant look once again for a gala dinner at Houghton Hall, but this time she swept her hair into a polished updo.