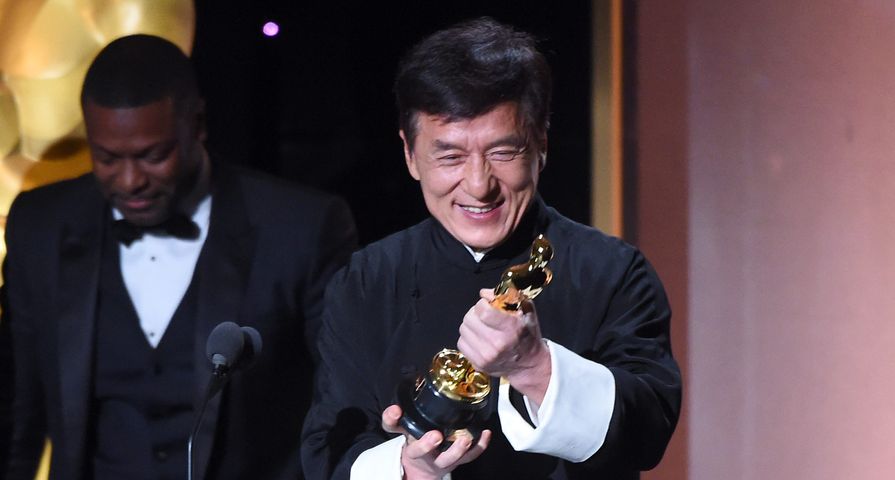 Jackie Chan has been in the film industry for 56 years and in that time has been in more than 200 films, including many blockbusters. In all of those years and through all of those films, the 62-year-old martial artist and actor has been recognized for his achievements in many ways and with many awards, but on Saturday, November 12, he was finally awarded an Oscar.

Chan was awarded an honorary Oscar at the Eighth Annual Governors Awards at the Hollywood and Highland Center in Los Angeles. Tom Hanks, Michelle Yeoh, and Chris Tucker all presented Chan with the award, and Chan happily accepted, stating, “My dad always said, ‘Son, you get so many movie awards in the world, when are you going to get one of these?’ Then I just look at my dad. ‘Ha, ha, ha, Dad, I only make comedy action movies.”

He added, “After 56 years in the film industry, making over 200 films, I’ve broken so many bones, finally this is mine. I want to thank you, Honk Kong, such an incredible city, my hometown, my hood, who make me. China, my country, I am proud to be Chinese. Thank you, Hollywood, for all those years teaching me so many thing, and also make me a little bit famous. I’m just honored to be here.”

Many of Chan’s famous friends also took the time to congratulate him including Arnold Schwarzenegger, who posted a photo of the two on set and the caption: “Congratulations to my great friend Jackie Chan on his fantastic honor – after 200 movies, you certainly deserve this Oscar. You always inspire.”

Congratulations to my great friend Jackie Chan on his fantastic honor – after 200 movies, you certainly deserve this Oscar. You always inspire.