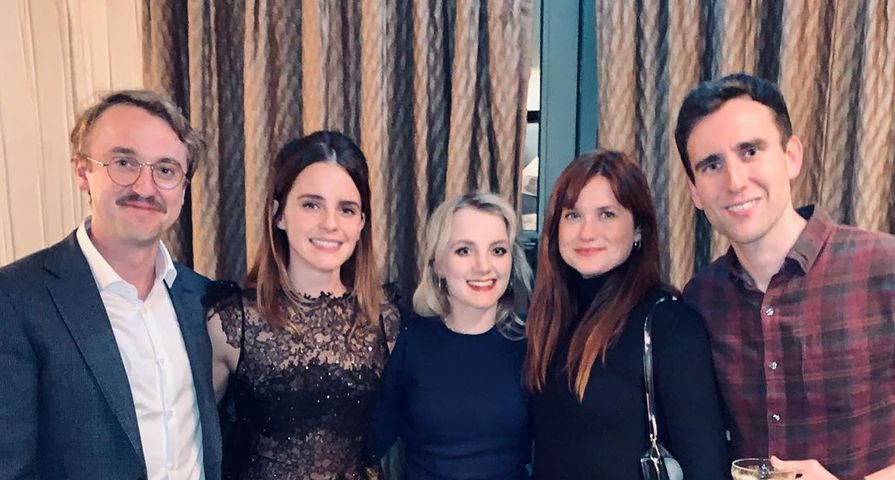 Felton shared a series of photos of himself posing with a number of his former costars on Wednesday, December 18. Watson appeared alongside Evanna Lynch (Luna Lovegood), Bonnie Wright (Ginny Weasley), and Matthew Lewis (Neville Longbottom) in the holiday pictures.

“Season’s greetings from my school mates,” Felton captioned his Instagram post. “@mattdavelewis & I mid debate x #gryfindorVSslytherin.” A candid second snapshot showed Lewis, 30, and Felton in heated conversation as they bookended the group with drinks in their hands.”

Watson, who is currently on a press tour for Greta Gerwig’s film adaption of Little Women, posted a noir edit of the same group snap to her Instagram with the caption, “Merry Christmas from us ☺️.”

The Harry Potter festive photo comes after a series of cast member hangouts this year. In November, Lynch was spotted at the Rhode Island Comic Con with James and Oliver Phelps, who played as the Weasley twins in the Harry Potter franchise.

“Thanks @ricomiccon for a lovely weekend and a chance to catch up with these jokers! ☺️❤️👭👬,” Lynch captioned the post.

A couple of months earlier, Felton posted a sweet photo of himself and Watson sitting side-by-side in South Africa. The Rise of the Planet of the Apes star was showing his former costar how to play something on the guitar, and the sweet moment quickly sparked romance rumors about the two going beyond just friends.

In an interview with Entertainment Tonight in November, Rupert Grint revealed there was always “a little bit of spark” between Felton and Watson during their ten years of filming the series together. This resulted in more fuel being added to the relationship rumors.

The 31-year-old actor then stated he wasn’t in the business of starting rumors about his former costars. “We were kids. It was like any kind of playground romance … I didn’t have any sparks. I was spark-free,” he added.

Merry Christmas from us ☺️