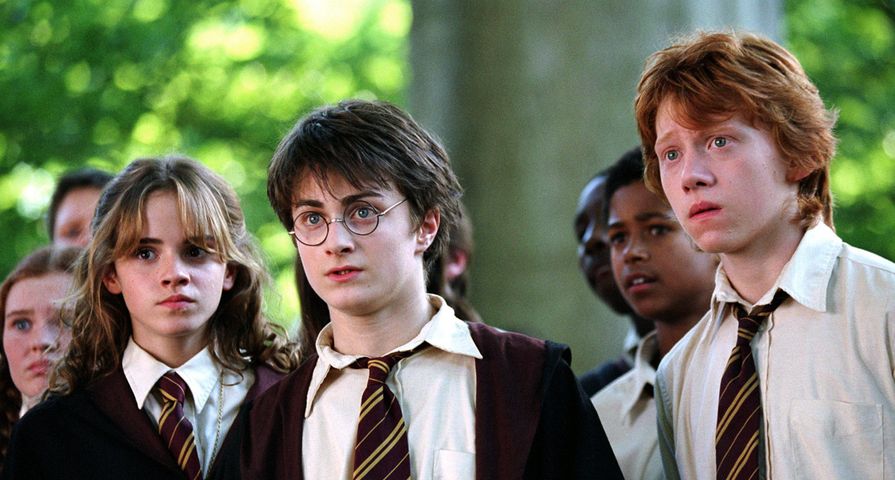 When J.K. Rowling thought of Harry Potter and the magical world he lived in, she had no idea it would turn into a worldwide phenomenon comprised of seven books and eight films. It launched her from a life of financial difficulty to multi-million dollar status (or perhaps billionaire status, but she donates so much of her money that it’s hard to get an exact figure for her net worth). Clearly, something about Harry Potter was extraordinary. Here are some interesting tidbits about the Harry Potter movies that even the biggest fans may not know.

Sir Ian McKellen was offered the role of Dumbledore, but he turned it down. Dumbledore was then played by Richard Harris in the Philosopher’s Stone and the Chamber of Secrets. After Harris died, Dumbledore was played by Michael Gambon.

11. The Earlier Movies Had A Dentist On Standby

Because the first few Harry Potter movies had so many young actors on set, a dentist was put on standby for the cast in order to replace any teeth that actors lost during filming.

J.K. Rowling told Alan Rickman (who played Severus Snape) a couple of things about the books before they were published so that they would help him portray the character more accurately. One such piece of information was that Snape had always loved Lily Potter, which Rickman knew long before the final book was ever released.

More than 40 kittens were filmed to create the 200 dishes covering the walls in Professor Umbridge’s office. Many were dressed up in hand-knit clothing. After the feline models were filmed, they all got adopted. This means that around 40 lucky people could own Harry Potter cats right now without even knowing.

8. There Were Two Sets Made For Hagrid’s Hut

One set was made with everything oversized so that the actors would look tiny and the other was made with things that were normal sized to make Hagrid look big enough to be a half-giant.

7. The Main Actors Had Things In Common With Their Characters

When Director Alfonso Cuaron started working on the Prisoner of Azkaban, he asked the three main characters to write an essay about their characters. The actors responded in a way that seems quite fitting with the characters they played. Emma Watson (who played Hermione) turned in a 16-page essay, Daniel Radcliffe (Harry) wrote one page, and Rupert Grint (Ron) didn’t even turn one in.

5. Professor McGonagall Was Almost Re-cast For The Final Two Movies

It’s hard to imagine anyone else playing Professor McGonagall, but Dame Maggie Smith nearly left the Harry Potter movies after she was diagnosed with breast cancer and had to go through chemotherapy for the final two movies. Smith went though filming while incredibly sick and weak, showing that she’s just as tough as (or tougher than) the character she played. Thankfully, Smith made a full recovery after the films wrapped.

4. The Harry Potter Franchise Caused A Big Problem For Owls

After watching Harry Potter movies, many children wanted to own pet owls. This caused a large spike in owl ownership. Unfortunately, owls do not make very good pets since they are difficult and expensive to care for. They also require a lot of space, and they can be dangerous. This caused a huge increase in the number of owls that were surrendered to animal rescues or abandoned altogether. J.K. Rowling had to publicly ask fans to stop buying owls.

3. A Model Of Hogwarts Was Used For Exterior Shots Of The School

Remember all of the stunning, sweeping shots of Hogwarts we saw in all of the movies? It may have looked like it was completely done with CGI, but it was actually a model of the school. The model was built for The Philosopher’s Stone, and was used for every movie after that. It was worked on and partially rebuilt over the course of the films. It took seven months and dozens of people to make it. It is a 1:24 scale construction that is about 50 feet in diameter. This stunning model was made to look incredibly realistic, with more than 2,500 fiber optic lights, hinged doors, real plants, miniature birds in the owlery and miniature courtyards. It is now on display at Warner Brothers Studio in London, England.

2. One Hogwarts Student Was Played By An Actor In Their 30s

Although most of the actors were very young when they began filming the movies, not every Hogwarts student was close to the age of the character they played. Moaning Myrtle (played by Shirley Henderson) was 37 when she first appeared in Harry Potter and the Chamber of Secrets. It helped that she was playing a ghost, of course, but that’s still a pretty astonishing age gap between the actor and their character!

Steven Spielberg was approached to direct the Harry Potter movies. He turned it down, but not before brainstorming a few ideas about the direction the movies would take. Wonder what the movies would look like with Spielberg in charge? Not everything needs to be left to the imagination since he has publicly discussed his ideas for the movies. Spielberg wanted to make the series animated and wanted to combine a couple of the books. There is a rumor that he had Haley Joel Osment in mind to voice Harry. Perhaps some people would love to see the books brought to life in that way, but I’m sure that many Harry Potter fans are relieved that the movies turned out the way they did (and that they were live action).