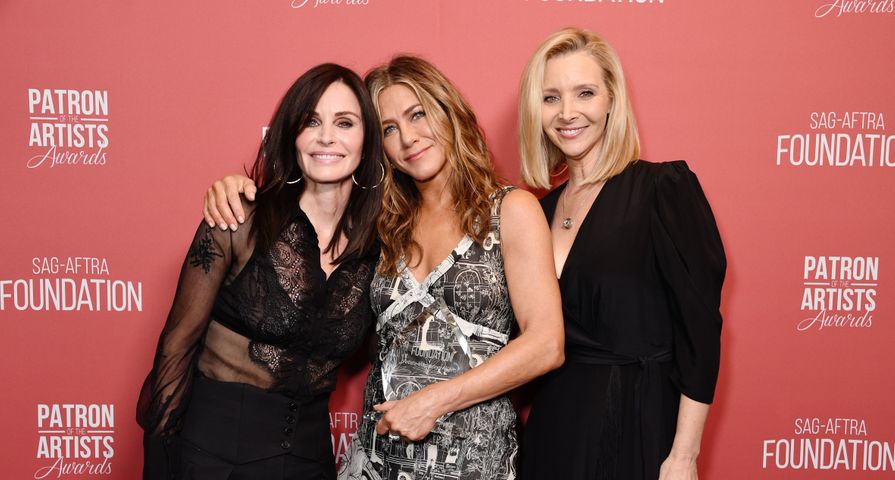 On Thursday, November 7, Jennifer Aniston reunited with her former Friends castmates Courteney Cox and Lisa Kudrow (who all still hang out occasionally) at the 2019 SAG-AFTRA Foundation’s Patron of the Artists Awards in Beverly Hills. At the event, Cox and Kudrow presented Aniston one of two Artists Inspiration Awards.

“Courteney and I are here to present an award to our forever cherished person,” Kudrow announced.

“Well, it means something different in the context of, well us,” said Kudrow.

“Well it’s too bad, because we really are friends,” Cox gushed. “We are not the only ones who know that Jen is a remarkable person. We all love her because she is truly, she radiates warmth, and joy and humor and love.”

In Aniston’s acceptance speech, she opened up about some sentimental memories of her time on Friends – the show that helped launch her career.

“Friends was lightning in a bottle. Yes it was,” said Aniston, who played Rachel Green on the show. “And I mean, I don’t mean the ratings. I mean, it was a very rarity environment where there was truly no competition amongst each other, no egos. Um, we were just six relatively unknown actors learning on the job together and thanking our lucky stars for being part of this rocket ship on a show. And we didn’t care who got the best line. Although Matthew Perry usually did steal all of the good lines, but it didn’t matter.”

“Oh and we had this thing, this bit we called it,” continued Aniston. “And if any of us tried a joke that failed miserably, we were just sort of sheepishly pull out our SAG card and say, ‘Here you go,’ or we were demanded by our castmates to just give it to them. But as long as we made the audience laugh, that’s all we really cared about. That’s all we cared about, was making them laugh, and we’d trade ideas and we would coach each other and help each other. If someone killed it, we would just beam with pride. So in that process we went from friends to, uh, a family.”

Aniston talked about how her experience on the show taught her “to surround yourself with supportive people who made me better, not only a better actor, but a better person.”

Once she finished her speech, Aniston hugged Cox and Kudrow on stage, and then the trio walked off together.