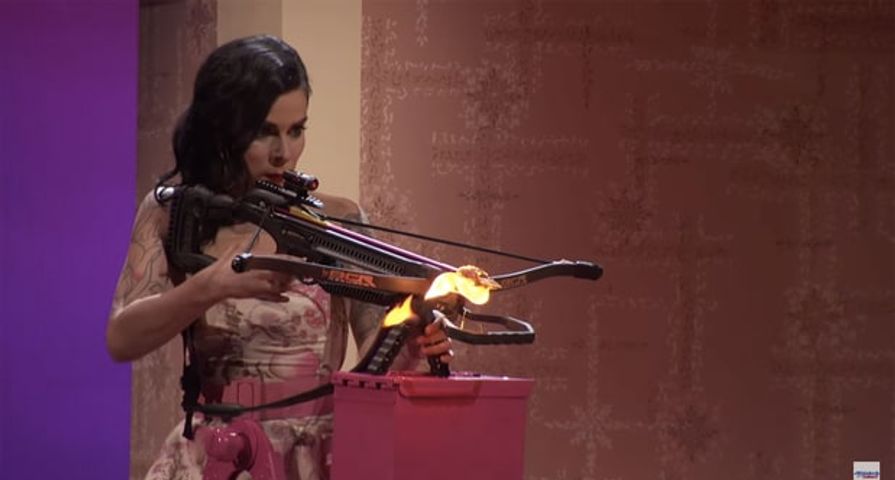 Fans of the reality competition series America’s Got Talent have seen almost everything when it comes to strange, shocking, sometimes gross, and sometimes dangerous skills and stunts performed by contestants hoping to impress the judges enough to make it to the next round and, unfortunately, one of those potentially dangerous stunts went horrible wrong on Tuesday’s episode.

While on live TV, Canadian stunt man Ryan Stock’s fiancee Amber accidentally shot a flaming arrow right at her fiance’s throat as they were trying to perform the stunt. As part of the routine, Stock fed a pole down his throat with a bullseye target attached to the end coming out of his mouth so that his fiancee AmberLynn Walker could fire a lit arrow at the target. Sadly, her aim was not on point and the flaming arrow instead hit Stock’s neck and not the target.

Stock was clearly panicked and grabbed at his throat while host Nick Cannon assured him, “You’re not on fire.” The judges looked on in shock as Cannon confirmed Stock was okay as the pair stepped forward to be judged despite the fact that they hadn’t finished the routine. As judge Heidi Klum began to state, “Now you know why I don’t like these things, because sometimes they can go wrong,” she was interrupted by Simon Cowell who said, “Stop this. Why are we judging this act? Amber just shot Ryan and he needs to go to a hospital now! I’m being serious.”

After the judges agreed with Cowell and expressed concern, Cannon announced before the commercial break that Stock had been checked out and he was OK. Afterwards, however, Cowell stated of the incident,  “I’ve heard he was OK, but this has never happened before. We always kid that they need to make it more dangerous, but then this happens. I thought it was part of the act, but then I realized this was bad. I just had a feeling, they looked nervous before they started. But he’s OK.”

The pair had made it to the quarter finals with dangerous stunts which have included Stock swallowing an electric drill and balancing a chainsaw in his mouth.

Watch the stunt go wrong below: